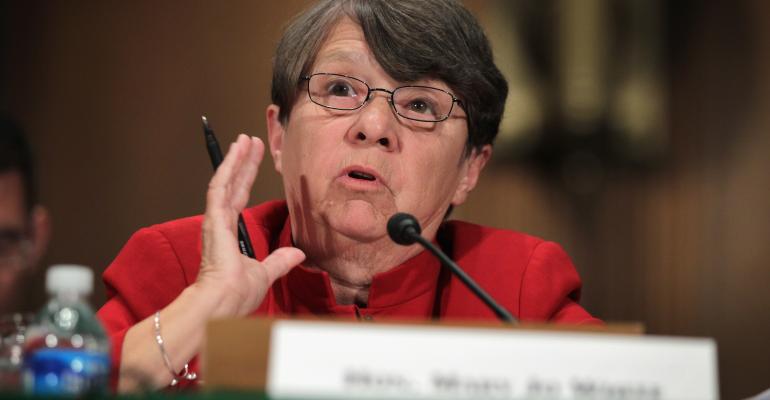 The U.S. Securities and Exchange Commission had an "unprecedented year" in enforcement actions, both in the number of cases and subject matter, Chair Mary Jo White said Friday.

In 2014, the SEC’s enforcement division brought 755 cases and collected an agency record $4.1 billion, White said at the Practicing Law Institute’s SEC Speaks conference. To compare, the SEC brought 686 enforcement actions in 2013, which resulted in $3.4 billion in disgorgement and penalties.

“We focused on innovative, high impact cases and punished and deterred wrongdoers in a way that sent important messages to the market, including by obtaining more admissions to achieve heightened accountability and acceptance of responsibility from entities and individuals,” White said.

Additionally, White noted that the agency also brought many first-of-their-kind cases that expanded the SEC’s footprint, including into areas such as high-frequency trading, whistleblower anti-retaliation authority and firms’ failure to have risk controls, as well as the first case against a broker/dealer for failing to guard against the misuse of customers’ private information.

“Enforcement is focused on cases involving violations where market participants fail to provide a level playing field in the securities markets,” she said, adding that the agency has renewed its focus on financial reporting and auditing fraud, experiencing a 40 percent jump in financial reporting cases last year.

While enforcement was up in 2014, White added that the Office of Compliance Inspections and Examinations (OCIE) was also busy. Examiners completed 1,850 registrant exams last year, a 15 percent increase. Additionally, the division took steps to broaden its reach, completing a cybersecurity sweep of over 100 firms and will continue to look for ways to further enhance data analytics and risk motoring in 2015.

Going forward, White outlined several of the biggest priorities for the agency in 2015, including market structure reform, enhanced risk monitoring of asset managers and issues around small company capital raising, such as crowdfunding. Additionally, the agency will continue to work on ongoing initiatives such as the adoption of a fiduciary standard for broker/dealers, the review of the accredited investor requirements and enhancements for broker/dealer responsibility rules.