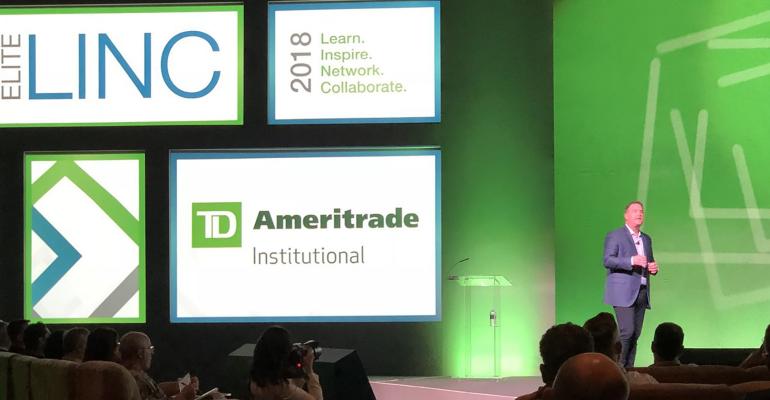 For RIAs, Revenue Is Up, But Fees and Profits Are Falling

Registered investment advisory firms grew assets under management by almost a median 20 percent in 2017, and only a portion of that is attributed to elevated equity markets.

Eliza De Pardo, with TD Ameritrade Institutional’s FA Insight research team, gave an early glimpse into the results of their 2018 benchmarking study at the custodian’s recent Elite Linc conference, with a gathering of its top financial advisors. In 2017, RIA firms averaged a near-record 7.8 percent median growth in new clients, and an overall median 15.8 percent rise in revenue, on average. That led to a 7.4 percent rise in new hires.

“Clearly firms feel they are producing enough to warrant the added headcount,” she said. “It’s a very good sign here in terms of firms willing to reinvest in talent.”

In addition, production metrics were up. De Pardo said her survey found an 8 percent increase in revenue per each “revenue generating” role at an advisory firm, suggesting firms were becoming more efficient.

But that growth came at the expense of profit margins, which dipped during the year to levels not seen since 2015, she said. Profit margins dropped to just under 19 percent, from almost 25 percent last year, a result of firms staffing up, expanding headcount and adding internal resources, she said.

Profit margins were lowest at those firms experiencing the most growth. Firms that concentrated on younger clients, those under 55 years old, added clients at a rate double that of other firms, but those firms accounted for only about 20 percent of the total survey base and had lower profit margins at 14 percent, about two-thirds the level of firms serving older clients. Most firms, 64 percent, said their client base was skewing older, meaning over 55.

The biggest driver of growth, at 56 percent of firms, was additional business from existing clients, and the second biggest was what the researchers called “client experience quality,” at 44 percent. De Pardo said that led them to believe most firms were relying too heavily on their current client base for growth, and not from new business development, which was cited as a driver by only 42 percent of firms.

Another differentiator? Firms that targeted their client development efforts through a focused lens—like gender, occupation or business owners—saw 35 percent more growth in new clients than firms that took a more general approach focusing primarily on prospect assets. Without a differentiator like that, she said, “it’s hard to go out to the market with a compelling message.” The more targeted firms also had higher profit margins, she said.

Despite the overall positive numbers, advisors surveyed seem reluctant to increase their fees, which have remained "very consistent,” she said, at a median 71 basis points, a dip from the 78 basis points reported in 2015. Eight out of 10 said they don’t foresee increasing fees at all in the next two years. Given the growth in services provided to clients, “we’d expect firms to be charging 80 to 100 basis points,” suggesting advisors “don’t feel confident” enough to have those kinds of conversations with their clients, despite the services they are providing.