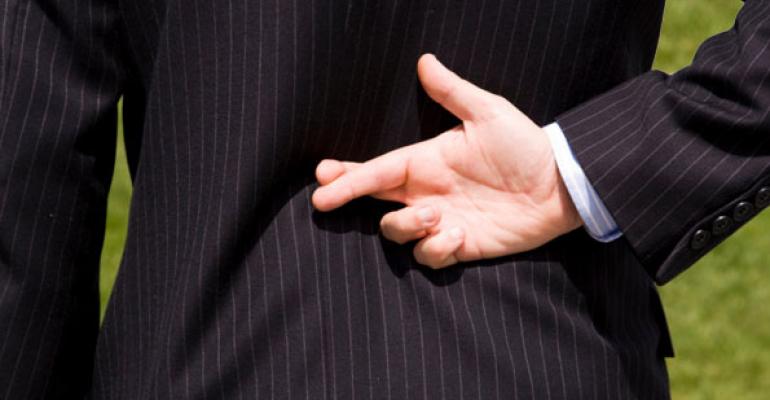 RIAs Are Not Without Conflicts

A new analysis by the Institute for the Fiduciary Standard found that the Form ADVs of nine large financial services firms, including Edward Jones and Merrill Lynch, have more conflicts of interest than those of the 135 registered investment advisors surveyed. But perhaps more telling, and often overlooked, is the fact that conflicts of interest are on the rise among RIA firms, which hold themselves out to be independent entities offering objective fiduciary advice.

“Investment advisors, when we speak to them, seem more willing to cloud their disclosures or their disclosure documents with conflicts of interest,” said Brian Hamburger, president and CEO of MarketCounsel and the Institute’s best practices board general counsel. “They seem less concerned that clients will raise issues with respect to conflicts.”

Ten years ago, about a quarter of MarketCounsel’s RIA clients had some type of registered rep or transaction-based relationship alongside their investment advisory fees. In the Institute’s study, more than one-third (35 percent) of RIAs have investment advisor representatives who are also registered reps of a broker/dealer. Thirty-nine percent report employees who are licensed to sell insurance.

“These data suggest that insurance sales representatives and registered representatives of brokers dealers may play a significant role in many RIA firms,” the Institute report said. “It raises the question of what impact their sales efforts may have on objective advice.”

The survey points to other conflicts at RIAs; almost one in five RIAs report recommending proprietary products. In addition, 66 percent of RIAs say they receive other forms of compensation besides fees, including brokerage and insurance compensation. And more than three-quarters of firms have a “relationship material to their business that creates a material conflict of interest with your clients.”

Knut Rostad, president of the Institute, said the SEC’s posture towards conflicts has become lax.

“That bolsters the idea that there’s a greater acceptance of conflicts of interest.”

Hamburger attributes the increase in conflicts to the 2008 crisis. Prior to 2008, it was easier for an advisor to forgo the revenue at a b/d to go independent, knowing that they would have higher growth rates as a fee-only advisor.

“Post-2008, those growth rates are a little more difficult to come by,” he said.

But one can have a conflict without necessarily being in the wrong, Hamburger said.

“This study really points to the fact that advisors are running very distinct and disparate practices among them,” he said. “Even when you look within these numbers, what you don’t see is the quality and the manner in which they’re actually handling these conflicts.”