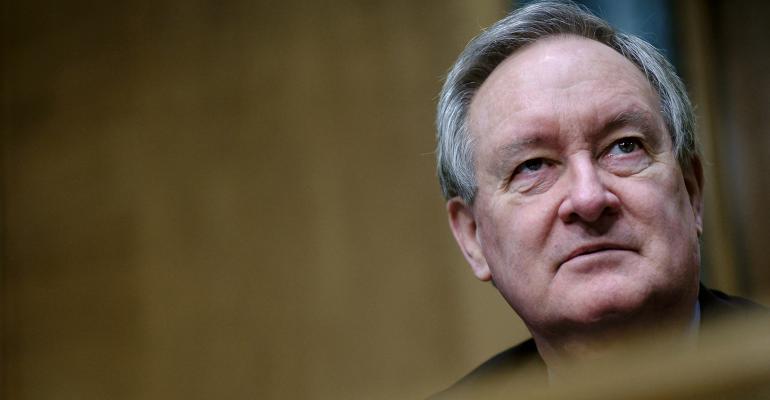 Some big banks are lobbying right up to the vote this week in hopes of salvaging a victory.

(Bloomberg) --The U.S. Senate is expected to approve a sweeping revamp of financial rules this week.

Of all the surprises that entails -- about a dozen Democrats signing on, Republicans leaving a lot of the much-maligned Dodd-Frank legislation intact -- the biggest is the lack of goodies for Wall Street.

Some big banks are lobbying right up to the vote in hopes of salvaging a victory because the legislation probably marks the last time lawmakers with full plates will take up financial regulations before November’s crucial midterm elections. After that, it’s anyone’s guess when the industry will get another chance at relief.

“Is there something more that is going to happen this Congress? You can make the case that it is hard to see,” said Ken Bentsen, chief executive officer of the Securities Industry and Financial Markets Association, a Wall Street lobbying group.

The bill has a good chance of becoming law. The U.S. House and President Donald Trump are eager to pass legislation reforming the 2010 Dodd-Frank Act, and White House staff have been making calls to lawmakers to build support.

Sponsored by Senate Banking Committee Chairman Mike Crapo of Idaho, the Republican’s bill seems intent on not helping the giant financial institutions that fueled populist anger in the lead-up to the 2008 crisis, and other firms that have continued to trigger criticism.

Megabanks like JPMorgan Chase & Co. and Bank of America Corp. could walk away almost empty-handed. And Equifax Inc. -- the credit company that left millions of consumers vulnerable to identify theft after being hacked last year -- might even be punished with tougher rules.

Wall Street has been more successful in getting changes it wants from regulators. With agencies like the Consumer Financial Protection Bureau and Office of the Comptroller of the Currency overseen by industry-friendly officials, among the regulations expected to be relaxed are the Volcker Rule, which prohibits banks from trading with their own cash, and lending rules that put brakes on predatory loans.

A core component of Crapo’s bill is giving small banks relief from a key provision in Dodd-Frank that they’ve been fighting to change for years. It would raise to $250 billion from $50 billion the asset threshold for banks to be subject to stricter Federal Reserve oversight, freeing firms like American Express Co. and SunTrust Banks Inc. from higher compliance costs associated with being considered “systemically important financial institutions,” or SIFIs.

Among the bill’s biggest losers are large regional firms like Capital One Financial Corp. and PNC Financial Services Group Inc., whose SIFI designations would remain.

The legislation does allow big banks to include municipal bonds in required stockpiles of assets that could be sold to provide funding in a crisis. It’s a modification JPMorgan and Citigroup Inc., especially, have pushed for years.

Wall Street is still lobbying for changes to the bill, including making one regulator responsible for the Volcker Rule, instead of the five agencies that now have a role in its implementation. The tweak, which is being sought by big banks such as Goldman Sachs Group Inc., could make it easier to relax the rule in the future.

The big banks also lobbied for relief in some capital requirements, but lost out. Instead, custodial banks such as State Street Corp. and Bank of New York Mellon Corp. are likely to see relief. Giant asset managers have been pushing to prevent the government from ever classifying firms such as BlackRock Inc. and Fidelity Investments as SIFIs.

Capitol Hill staffers and lobbyists said they are skeptical that any changes helping Wall Street will make it into the legislation under the wire.

The measure must still pass the House, where some Republicans are likely to agitate for stripping away more regulation.

In many ways, Crapo’s bill forever enshrines the framework for post-2008 rules despite years of Republicans’ promises to gut Dodd-Frank and Trump’s pledge to do a “big number” on it about 14 months ago.

“Dodd Frank is still left in much of its form,” says Jim Nussle, president of the lobbying group Credit Union National Association. “That doesn’t change.”

The support of some Senate Democrats has been key to advancing the bill. Particularly supportive are Heidi Heitkamp of North Dakota and Indiana’s Joe Donnelly, who are up for re-election in states that Trump won in 2016.

The bill has divided Democrats, magnifying the party’s divisions on financial issues. On one side are progressives like Senator Elizabeth Warren of Massachusetts, who have attacked fellow Democrats for supporting a measure that she says is a handout to Wall Street and puts consumers at risk. While the fighting isn’t expected to dim the bill’s chances of passing, it does create a wedge that could have implications in this year’s midterm elections as Democrats try to take back control of the House and Senate.

Crapo may consider a package of legislation later this year addressing the securities and trading industries, according to lobbyists and Capitol Hill staffers. That would give Wall Street another shot at lobbying Congress to make changes.