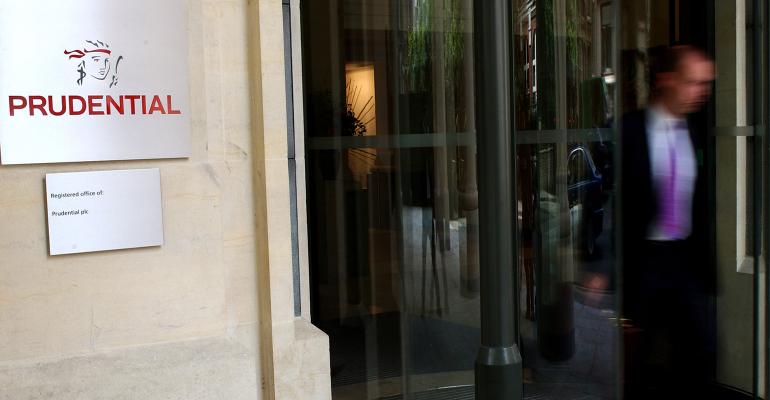 Prudential to Split Firm by Spinning Off U.K. Operations

Investors will receive shares in M&G Prudential, formed last year through the combination of its U.K. asset-management business with European insurance assets.

(Bloomberg) --Prudential Plc soared on plans to split the firm by spinning off its U.K. operations, a move that will create an insurance business focused on faster-growth markets in Asia, Africa and the U.S.

Investors will receive shares in M&G Prudential, formed last year through the combination of its U.K. asset-management business with European insurance assets. Both firms are likely to be included in the benchmark FTSE 100 Index of the U.K.’s biggest companies. Ahead of the demerger, Britain’s largest insurer will also sell 12 billion pounds ($16.7 billion) of annuities to Rothesay Life.

Prudential, which derives about a third of its earnings from Asia, is benefiting from an expanding middle class and growing insurance coverage in the region. The U.K. business, led by John Foley, will have more control over its strategy and capital as a standalone company. It will also be able to play a greater role in developing long-term savings products, Chief Executive Officer Mike Wells said.

“The new M&G Prudential has much stronger prospects and the separation has the capability to unlock quite a large amount of value for shareholders,” said Berenberg analyst Trevor Moss, who estimates the company could be worth as much as 15 billion pounds. “The U.K. business valuation has suffered as a consequence of being a small part of the sum of the parts and being a low-growth business in recent years.”

The spin off of the European operations has been an option considered by Prudential management for several years. It comes as household wealth in Asia is predicted to rise from $53 trillion to $78 trillion over the next five years, creating opportunities for asset managers and insurers to sell products.

Prudential Plc will remain headquartered in London and retain its other listings.

The timing of the demerger at the 170 year old company is subject to a number of factors including the completion of the sale of annuities to Rothesay. Bloomberg News reported last week that Rothesay, backed by Blackstone Group LP, was in pole position to buy the annuities.

The sale is part of a strategy to make the company more capital light as insurers look to exit that type of business to free up money for share buybacks, debt repayment or acquisitions.

Following the annuities sale, “management is retaining all potential capital release to support the demerger, which in our view would be disappointing as the market was expecting a special dividend out of that,” JPMorgan Chase & Co. analysts Ashik Musaddi and Kunal Zaveri wrote in a note to clients.

National Champions
“There’s a lot more they can do in the market,”  Wells said in a call on Wednesday, referring to M&G Prudential. “As far as what more the group can do for them, I think it’s a harder question. They’ve grown to a size and scale where they are capable of being national champions.”

Spinning off the firm will mean it’s no longer competing with Asia or other parts of the business for capital, he said. “If the U.K. has very good returns but it’s not equivalent to the other two markets, there’s a conflict there that wouldn’t exist if you’re standalone."

Brexit did not play a role in the decision, Wells said on a call with reporters. He declined to comment on the potential to spin off the U.S. unit.

“We expect that at some point in the future there will be further decoupling,” RBC Europe analyst Gordon Aitken wrote in a note to clients. “In our view, the Asian business will be split from the U.S. business when U.S. life valuations recover, and the asset manager M&G will be split from the U.K. insurance business.” M&G Prudential’s fair value is about 9.8 billion pounds, he said.

Acquiring annuities is attractive to private equity-backed firms including Blackstone, who are betting that they can generate better returns than insurers. Liabilities on the contracts for annuities -- which guarantee customers a future income stream in return for a lump sum -- can rise if interest rates are lower than anticipated, or if equity markets plunge.