/sites/all/themes/penton_subtheme_wealthmanagement/images/logos/footer.png
Recent
Recent
Nine Must Reads for the CRE Industry Today (Nov. 29, 2022)
Nov 28, 2022
Is the Retail Reckoning for Regional Malls at an End?
Nov 28, 2022
Making Client Reporting the Center of Your Client Experience
Nov 28, 2022
Kroger, Albertsons CEOs Will Testify Before Senate About Merger
Nov 28, 2022
Featured
The 10 Best and 10 Worst States in Which to Retire in 2021
Jul 15, 2021
I’m an Advisor. This Book Changed My Life
Aug 31, 2022
Fifteen Must-Listen Business Podcasts for Advisors
Aug 14, 2020
Celebrity Estates: Jay Leno and Planning for Classic Car Collections
Feb 22, 2022
DOL Fiduciary Rule
brought to you by 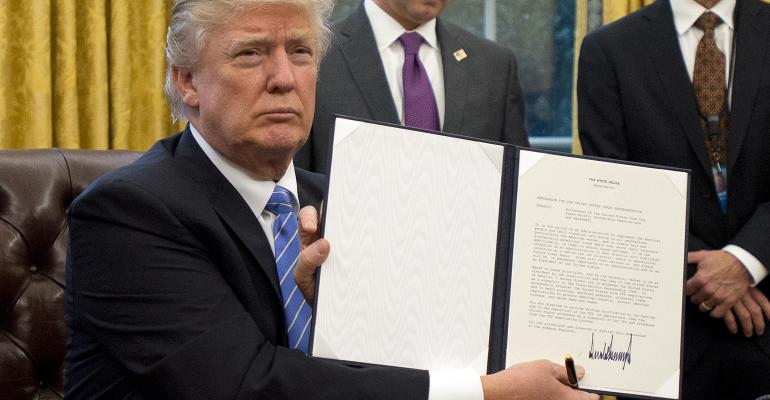 Dropping the fiduciary rule at this point is a lose-lose proposition.

(Bloomberg View) --President Donald Trump says he wants to reduce the regulatory burden on the finance industry. But by taking aim at a new rule on retirement advice, he’ll most likely add to that burden -- and harm many small investors at the same time.

In the U.S., saving for retirement can be a perilous endeavor. “Free” advice often isn’t. Advisers such as brokers and insurance agents usually work on commissions that encourage them to steer less sophisticated customers into expensive funds and annuities and away from better, cheaper alternatives. Typically they don’t disclose this conflict of interest. Estimates say the extra fees add up to billions of dollars a year, money that would otherwise go toward ensuring retirees’ financial security.

After much debate and consultation, the Labor Department last year issued a rule to protect investors: Advisers who get paid to recommend retirement investments must disclose the arrangement. The rule also holds them to the same fiduciary standard that applies to most other financial advisers, meaning they can be sued for failing to put clients’ interests first. Note that it doesn’t apply to financial education and simple marketing -- so, for example, big mutual-fund companies such as Vanguard or Fidelity could keep selling their products on their own websites.

Just as the industry was getting ready to comply, Trump has ordered the Labor Department -- which still lacks a head -- to review the rule with an eye to rescinding or revising it. His National Economic Council director, Gary Cohn, has criticized the rule for “putting only healthy options on the menu” -- as if parsing opaque conflicts and investment options were as simple as choosing between oatmeal and doughnuts.

This is no way to go about reducing the regulatory burden. Plans have been made. Many financial firms say they’ll comply regardless. Scrapping the rule would mainly benefit the least scrupulous advisers, while adding to regulatory uncertainty for the rest -- a big cost in its own right.

This isn’t to say the rule is perfect. Discouraging commissions could lead advisers to stop serving people with small accounts. Research suggests this may have happened in the U.K., which recently adopted a similar but more stringent rule. The Labor Department should be on the lookout for such unintended consequences. Congress might even want to consider opening the federal Thrift Savings Plan --- available to legislators and their staff -- to people who don’t have access to a retirement plan at work. Encouragingly, though, financial companies are rapidly rolling out inexpensive automated services that might address any “advice gap.”

Dropping the fiduciary rule at this point is a lose-lose proposition. It would mean worse retirement advice for the people who need it most, and added costs for much of the industry. President Trump should let it stand.