/sites/all/themes/penton_subtheme_wealthmanagement/images/logos/footer.png
Recent
Recent
Thanks to Pandemic Puppies, CRE Investors Are Turning Their Attention to Veterinary Clinics
Aug 08, 2022
Seven Must Reads for the CRE Industry Today (Aug. 9, 2022)
Aug 08, 2022
KKR Sees ‘Golden’ Chance to Snap Up Risky Debt Amid Market Chaos
Aug 08, 2022
IRA Legacy Gifts Are Just Around the Corner
Aug 08, 2022
Featured
The 10 Best and 10 Worst States in Which to Retire in 2021
Jul 15, 2021
Poll: 15 Classic Books on Investing and the Markets
Apr 03, 2020
Fifteen Must-Listen Business Podcasts for Advisors
Aug 14, 2020
Celebrity Estates: Jay Leno and Planning for Classic Car Collections
Feb 22, 2022
DOL Fiduciary Rule
brought to you by 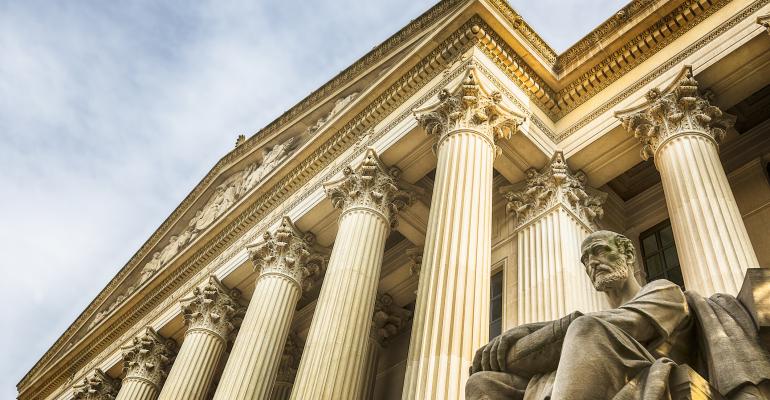 Nevada was the first state to pass a fiduciary statute in the U.S. Other states are considering similar measures.

Nevada state Sen. Aaron Ford said he’s been contacted by several politicians from other states since his bill holding financial advisors to a fiduciary standard was signed into law June 2. Even though the Department of Labor’s retirement-savings rule took partial effect this month, and will be fully implemented Jan. 1, 2018, its future is still tenuous, as some Trump administration officials have said they want to overturn it.

So some politicians at the state level are interested in passing legislation similar to Nevada’s, Ford said.

He declined to say who approached him, because he was not aware of any drafts of legislation that had been made public. Most state legislative sessions have also ended for the summer, so work on any potential bills will likely be slow.

The DOL’s rule and Nevada’s new law accomplish the same primary goal of their proponents: to hold financial advisors to a fiduciary standard (rather than the current suitability standard) when advising clients on their retirement accounts.

So why create a state law when the federal rule is in place?

Uncertainty drove the creation of Nevada’s own fiduciary rule. It also clearly categorizes brokers and others as “financial planners” who are defined by Nevada law and subject to a higher standard of service.

In Nevada, financial planners are also required to disclose to clients, at the time advice is given, any profit or commission they would receive if the advice were followed.

“Now that I’ve seen [the law], and I understand what Nevada is trying to do, I’m a little surprised that other states haven’t done something similar,” said Marcia Wagner, managing director of The Wagner Law Group, who specializes in ERISA and employee-benefits law.

Passing legislation at the state level is a precautionary move, Wagner said. Nothing bars Congress from passing a law that could upend the DOL rule, and the Securities and Exchange Commission is considering action while a comment period is underway.

“I felt it was important to protect Nevadan citizens in the event the federal government wouldn’t,” Ford said.

Ford presented Nevada Senate Bill No.383 this spring, after President Donald Trump ordered a 60-day delay of the DOL’s rule. It was first read to the state senate March 20, well before Labor Secretary Alexander Acosta announced in a May 22 Wall Street Journal op-ed that the DOL rule would begin to take effect as planned on June 9.

Nevada’s Democrat-controlled state senate passed the bill April 18, and the Democratic majority in the assembly approved the bill two days after Acosta’s op-ed was published. In both cases, all Republican members voted against the bill. It then went to Nevada Gov. Brian Sandoval, a Republican, who signed the bill into law June 2.

Sandoval’s office did not respond to requests for comment. Minority leaders in both the Nevada senate and assembly also could not be reached for comment.

Christine Lazaro, a law professor at St. John’s University and the director of the school's Securities Arbitration Clinic, said the Nevada law was “formalizing at the state level what’s already in motion at the federal level.”

Since the law goes into effect July 1, some brokers in Nevada might need to speed up any changes they had already planned to make in anticipation of the DOL’s rule. However, there is still regulatory action that needs to be taken.

The law only authorizes Nevada’s secretary of state “to adopt regulations concerning such fiduciary duty; providing penalties; and providing other matters” related to it, and none of the aforementioned has happened yet.

The Nevada Securities Division, which is part of the Secretary of State’s office in Nevada, said in a statement that the division was not involved in the drafting of the original version of the law. After learning of the bill, the division then reached out to Ford and industry representatives. It is working on regulations related to the law but does not anticipate they will be effective until after July 1.

Merrill Lynch, Morgan Stanley and Wells Fargo had no comment on the Nevada law. UBS could not be reached for comment.