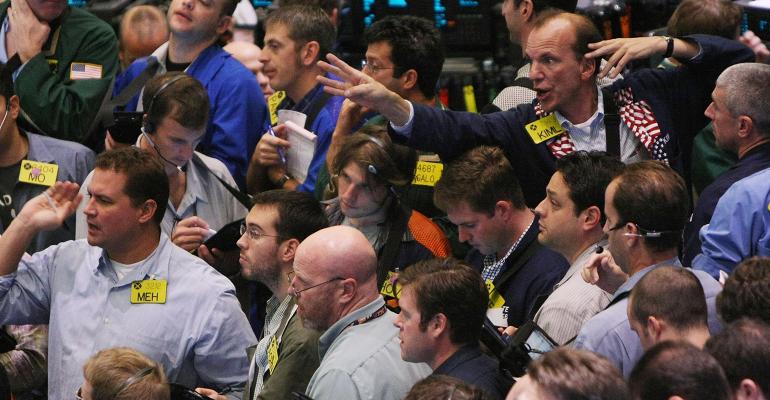 In an age when computers are doing most of the trading, having human traders on the floor still has its place.

(Bloomberg) --When Roma Colwell-Steinke arrived at the Chicago Board Options Exchange in October 1989, she couldn’t believe how many floor traders there were in their colorful jackets, calling out orders.

“We get to the gallery there and I looked out at the CBOE and I’d never seen anything like that,” said Colwell-Steinke, who was in her 20s at the time. “There are 4,500 people running around all over.”

That crowd has dwindled to about 440. But the trading floor remains vital to CBOE Holdings Inc. even as its  takeover of Bats Global Markets Inc. gets the Chicago-based company into stocks, ETFs and currencies. Although the more-than-$3-billion deal also gave CBOE some of the industry’s best trading technology, it’s still got one foot firmly in the pre-electronic era; before completing the purchase Tuesday, a third of its business was struck by traders with shouts and hand signals in the pits.

While the persistence of open-outcry trading in options stands out, given that computers now handle much of the buying and selling in financial markets around the world, CBOE isn’t alone. In April, Nasdaq Inc. plans to move its options trading floor in Philadelphia to a new building. Intercontinental Exchange Inc., owner of the New York Stock Exchange, still hosts human market makers in New York and San Francisco. Even Box Options Exchange, one of the smallest markets, is seeking regulatory approval to run a floor.

In an age of predominantly electronic and automated trading, open outcry survives for a couple of reasons. Some institutional investors want a human handling their complex orders, and some like to use the floors to gauge interest in large orders.

“There’s a comfort for these large customers to be able to come in and have all the players in one space,” said Colwell-Steinke, an instructor at the Options Institute, CBOE’s educational arm. The 1989 earthquake in the San Francisco Bay Area, which closed that city’s options market, forced her and other market makers to work in Chicago for a few days. A year later, she moved to Chicago permanently and was a market maker on the CBOE floor for Group One Trading LP.

Later, she traded using a computer. But she didn’t like it. “It didn’t fit my personality to sit in front of a computer all day,” she said.

For customers who want the choice, CBOE’s floor provides deep liquidity for its exclusive products -- contracts on the S&P 500 and VIX -- as well as options that also trade on exchanges owned by others, said CBOE Chief Executive Officer Ed Tilly.

“What CBOE has provided for its customers is the flexibility for them to choose how best to represent their order,” he said in an interview Tuesday. “We’re basically neutral” on whether customers trade electronically or in the pits, Tilly added. That’s a striking contrast to Bats, which was an all-electronic exchange.

In recent years CBOE has tried to expand its volatility options franchise outside the U.S., offering contracts on its VIX index nearly 24 hours a day to snag overseas traders. The takeover increases CBOE’s global footprint given that Bats has the largest market share in Europe among stock exchanges. Bats exchanges also handle about a fifth of volume in the U.S. stock market, good for second place behind NYSE, as well as currencies.

“What we add and what changes is really diversification of the asset classes that are going to be able to be traded on CBOE’s platforms to include obviously U.S. equities, European equities and FX,” Tilly said.

The company plans to expand its options business and sees an opportunity for revenue in market data.

“Both companies had growth opportunities,” said Chris Concannon, the former CEO of Bats who’s now CBOE’s president. “I’d say the biggest opportunity for the combined organization is the continued growth of the VIX product globally.” The VIX permits bets on market volatility.

CBOE plans to ditch its own trading software in favor of Bats technology, which is considered among the industry’s best. Good as it is, it won’t appeal to everyone.

“A machine can’t do everything yet,” said Spencer Mindlin, an analyst at Aite Group.