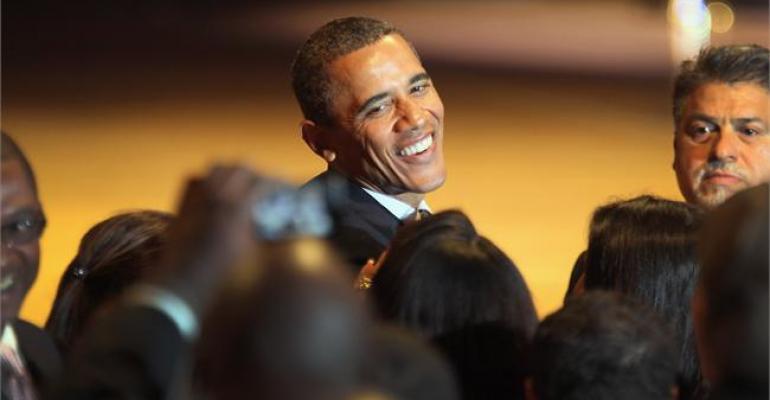 President Barack Obama's reelection to another four-year term sets the stage for a broad and significant impact on financial services and the wealth management industry.

Wall Street and its stakeholders were largely not in Obama’s camp throughout the campaign; in a recent WealthManagement.com poll, 70% of financial advisors said a Mitt Romney presidency would be better for business. The biggest concern? Many think the continuation of an Obama presidency will only bring increased regulation for financial advisors, higher taxes, and stifling national debt.

Of course, that remains to be seen. But now that Obama is returning to office, the country can expect more "big government," said David Thetford, a securities compliance principal analyst for Wolters Kluwer Financial Services. Thetford predicted that the President would generally “go in the same direction” during his next four years.

Others agree. “There will be continuing and more regulations, there will be a bigger regulator, and in the post-Madoff era, the pendulum will have swung too far,” said Richard Roth, founder of The Roth Law Firm in New York City, which specializes in securities law. “All of my clients…are sick and tired of being dragged down to the SEC or FINRA for the most mundane things."

A second Obama administration, as well as a continued Democratic majority in the Senate, will step up the implementation and enforcement of the Dodd Frank Wall Street Reform and Consumer Protection Act, which Romney promised to kill. For example, an Obama win means a further push for the Volcker Rule that restricts financial services institutions from making "speculative" investments that don't benefit clients and instead stick to safer investments such as Treasuries, said Andy Friedman, principal of The Washington Update.

Likewise, the industry can expect that Dodd-Frank's mandate to apply a uniform fiduciary standard to all financial advisors and brokers will continue, meaning more disclosures from advisors about how they’re being paid and a greater focus on their perceived conflicts on interest.

“If the RIA fiduciary duty standard gets imposed on brokers, I think they will be exposed to legal liability the likes of which they’ve never seen,” said Andrew Stoltmann, an attorney with The Stoltmann Law Offices in Chicago. “And I think so many of the practices that are just inherent in the broker/dealer model, from a legal standpoint, will be really problematic.”

Regardless, the conclusion of the election season is likely to be good for the market. “The market itself always likes certainty over uncertainty,” said Tim Steffen, director of financial planning for Robert W. Baird & Co. Indeed, when there’s clarity restored as to the direction of future policy, the market will usually remain level or see a bump, said Envestnet’s managing director Jim Patrick.

But Obama’s re-election is unlikely to help solve the looming “fiscal cliff," the coming expiration of the Bush-era tax cuts along with the imposition of mandatory spending cuts due to kick in on Jan. 1. To clear this hurdle, bipartisan collaboration is needed during the few weeks when Congress is back in Washington D.C. before the end of the year, said Reto Gallati, the author of several books including “Risk Management and Capital Adequacy.” Indeed, some predict that the "fiscal cliff," if left unaddressed, will propel the country into another recession.

“The issues are so big that whoever wins must be willing to compromise with the other side,” said Gallati, the former chief risk officer and head of investments at Nuveen Investments. More likely is that Congress and the administration will make some temporary measures to "kick the can down the road." Roth predicted Congress would extend the tax cuts at least for another six months.

“They don’t call it a fiscal cliff for nothing,” Roth said. “It is a cliff. It is a drastic change in the estate and tax structure that we have, and I don’t think anyone wants a drastic change.”

Clearly, an Obama win puts more weight behind his proposals to raise taxes on the affluent. Obama has insisted that tax reform bring in more revenue, saying he will veto any bill that extends across-the-board tax cuts.

Obama wants taxes to go up for people making $250,000 or more, but Friedman believes he’ll compromise, agreeing to raise taxes for those above the $1 million threshold.

“Of course, if you do the math, that doesn’t actually solve the problem,” said Barbara Novick, vice chair and head of government relations at BlackRock. “He’s got to do something more than that,” such as address entitlements like Social Security and Medicare.

Even with a decisive Obama victory, that may be a bridge too far.