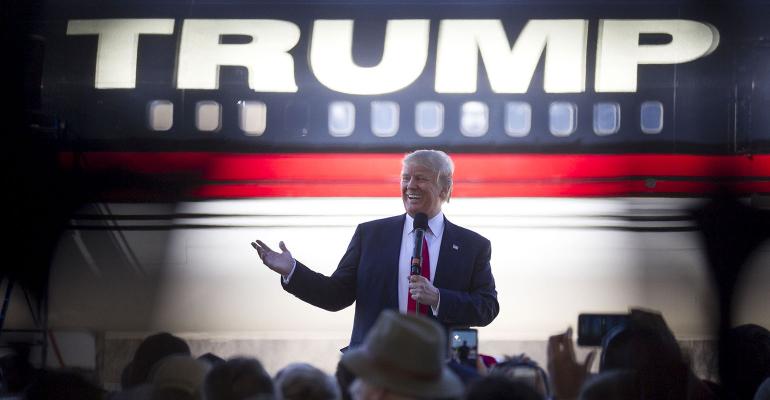 Candidate Trump and President-elect Trump have to different views on the hedge fund industry.

(Bloomberg) --Donald Trump, the candidate, was blunt: “Hedge fund guys are getting away with murder.”

But Donald Trump, the President-elect, is going a bit easier on the hedge funders -- to huzzahs from the industry.

In Trump, hedge-fund types are finally getting their day in Washington. One of their own, Steven Mnuchin, is even a contender for Treasury secretary.

It’s a remarkable turnabout for a business that, at its height, came to symbolize an era of Wall Street hyper-wealth. After a painful run of scandals and investigations, industry veterans now hope Trump will bring a softer touch to the financial industry, if not rehabilitate its reputation.

“That nonsense is ending: the anti-banking cabal and the screed of hatred for people that live on Wall Street,” Anthony Scaramucci, a well-known money manager who is on the transition team, said last week following Trump’s victory.

Whether the financial industry will get everything it wants is anyone’s guess. On Wednesday, the President-elect took to Twitter to dispute reports that his team was in disarray. Adding to the turmoil, an early hedge-fund voice in the ranks -- Kevin O’Connor, general counsel to the billionaire Steven A. Cohen’s Point72 Asset Management -- abruptly left Trump’s fold.

But money managers like Scaramucci see reason for optimism. Mnuchin, a former hedge fund manager and partner and Goldman Sachs Group Inc., is a top candidate to lead Treasury; he served as Trump’s campaign finance chief. John Paulson, who made billions when the housing market collapsed, is an economic adviser; he was a Trump donor and has been pushing for changes to Fannie Mae and Freddie Mac, the U.S. mortgage giants.

Rebekah Mercer, the daughter of hedge-fund magnate Robert Mercer, is on Trump’s transition team. The elder Mercer’s Renaissance Technologies has been trying to resolve a multi-billion-dollar tax dispute with the Internal Revenue Service. Carl Icahn, the corporate-raider-turned-activist-investor, has also backed Trump, hoping the candidate will rein in Environmental Protection Agency rules, which he says harm refiners like CVR Refining LP, where he has a controlling stake. His wife, Gail, has been named to the inauguration team.

Financial-industry executives are pressing Trump to roll back a range of regulations that they say throttle business. A prime target is the post-crisis Dodd-Frank Act, which proponents say makes the financial industry safer. Others include rules requiring investment professionals to put their clients’ interest before their own when giving retirement advice.

Scaramucci, founder of SkyBridge Capital and impresario of an annual industry conference in Las Vegas, says over-regulation was the “root cause” of the 2008 financial crisis -- a notion Wall Street critics like Elizabeth Warren call preposterous. But for hedge funds and the wider financial industry, a kinder approach may not require ditching the rules. Enforcement -- or less of it -- would bring relief too.

“I would expect that the easing-up on Wall Street will occur more around the edges,” said David Tawil, co-founder of Maglan Capital. As Tawil put it, regulators may adopt an approach of “looking the other way, rather than enforcing regulations strictly.”

Whatever the industry’s success in Washington, the Trump administration may not be able to burnish the reputation of American finance among many ordinary people.

“Trump built his base by playing on the fears of working-class Americans that they were being taken advantage of by the ‘elites,”’ said Sol Waksman, the president of BarclayHedge, an alternative investment database. “I do not see how repealing Dodd-Frank and lowering income taxes for the wealthy, which he says he is going to do, ​will improve Wall Street’s image for working-class people."