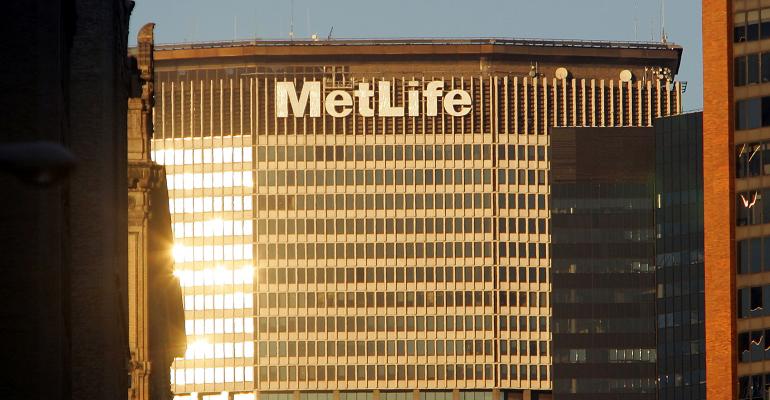 MetLife Files for Spinoff of U.S. Unit After Weighing IPO

(Bloomberg) -- MetLife Inc. has filed for a spinoff of a U.S. retail unit after considering alternate plans to sell the business or exit through an initial public offering.

At least 80.1 percent of the shares in the unit, Brighthouse Financial Inc., will be distributed to MetLife investors under the plan, the parent company said Wednesday in a filing. The stock is to be listed on the New York Stock Exchange under the ticker “BHF,” and the timing of the transaction will depend on variables including “regulatory considerations and economic conditions,” according to filings. MetLife said it could still opt for an IPO or sale.

“A spin can generally happen even if the IPO markets are a bit choppy,” Hele said. “Had we planned this a year ago, and were scheduled for the first quarter this year, it would have been very tough to do an IPO.”

Brighthouse offers policies with death benefits and also retirement products such as variable annuities, which can provide a lifetime stream of income to customers. While low bond yields or declines in stock values pressure results, annuities can generate substantial profits when markets are favorable.

Brighthouse had about $240 billion in assets as of June 30, according to the document. The business had a net loss of $1.02 billion in the first six months of this year after posting annual net income of least $1 billion in 2013, 2014 and last year.

MetLife said in a separate filing that it anticipates about $1.5 billion of “separation-related items” in the second half of this year tied to the transaction, which will reduce free cash flow. The figure includes foregone dividends, a cost tied to debt and other expenses.

The announcement could eventually allow MetLife to resume share repurchases. Kandarian said in January that he would pursue an exit of Brighthouse and then announced the next month that buybacks would be on hold until the board decided which separation path to pursue.

Spinning off the unit may also be the quickest option, RBC Capital Markets analysts led by Eric Berg said Aug. 24 in a note.

“A spin would get the majority of the highly capital-markets-sensitive, and therefore volatile, retail business off of Met’s books a lot sooner than would an IPO,” the analysts said.

Kandarian is seeking to simplify MetLife and limit regulatory oversight, announcing a deal in February to sell an adviser network to Massachusetts Mutual Life Insurance Co. ahead of new, stricter rules on pitching some retirement products to consumers. He won a court ruling the next month that overturned the government’s designation of MetLife as too big to fail, a tag that could come with stricter capital requirements. The U.S. is appealing the decision.

Kandarian’s company will remain the largest provider of employee benefits in the U.S. and a major insurer in markets including Japan and Latin America, according to the statement.

“Today’s filing marks an important milestone for both MetLife and Brighthouse,” he said in the statement. “The separation will enable both companies to compete more effectively.”

MetLife had slumped 4.6 percent since Dec. 31 through Wednesday’s close in New York trading. The company slipped 11 percent last year and was little changed in 2014.

Kandarian’s insurer intends to retain the licensing agreement for Peanuts characters such as Snoopy and to keep the MetLife name on the football stadium used by the New York Jets and New York Giants, said a spokeswoman for the insurer, reiterating prior remarks. She said the company periodically reevaluates marketing relationships.