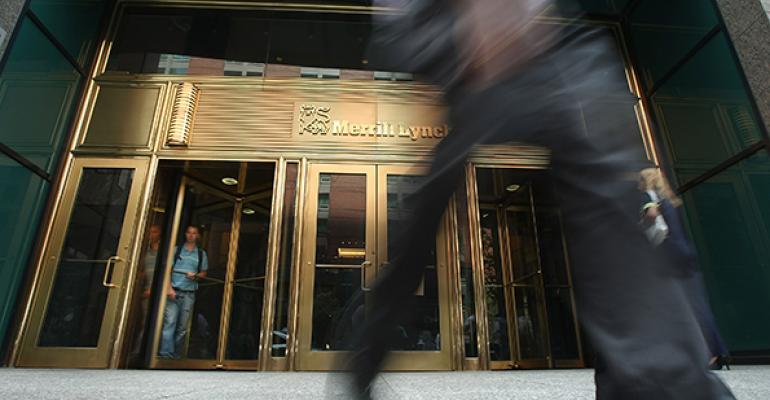 With the death of the DOL’s fiduciary rule, the firm will go back to allowing brokers to collect commissions for clients’ retirement accounts.

In the wake of the death of the Department of Labor’s fiduciary rule, Bank of America’s Merrill Lynch Wealth Management has reversed course on its highly touted 2016 decision to ban commissions for brokers servicing clients’ retirement accounts.

The wealth manager will again allow commission-based brokerage activity in client retirement accounts beginning October 1 in anticipation of proposed rules regarding financial advisors being put into effect by the Securities and Exchange Commission.

It’s also expanded the summaries of its services, created a “plain-English” disclosure form and beefed up supervisory routines for client brokerage activity and brokerage versus investment advisory accounts.

A senior Merrill Lynch executive, who declined to be identified for this story, said that based on the regulatory developments and client feedback, the steps give clients choice and flexibility. The executive said the firm’s more than 14,800 advisors received a note about the changes Thursday morning.

Shortly after the DOL’s fiduciary rule passed, Merrill Lynch banned all commission-based retirement investment accounts and required them to be fee-based. Then, in the spring of 2017, the brokerage announced the creation of limited-purpose brokerage IRAs for cash and bank deposits with the intent of expanding that to money funds, CDs and concentrated stock positions, such as those frequently held by executives.

In those situations, the brokerage used the DOL’s “best interest contract” exemption which allows advisors to receive commission-based compensation for those accounts. Ultra-high-net-worth clients, defined as those with $50 million or more, also had the ability to invest with hedge funds and private equity through Merrill Lynch under the exemption.

But those accounts are no more, as the wealth manager backtracks on those changes it made to comply with a rule that no longer exists.

The reversal is not one that other brokerages have had to make. Morgan Stanley said in October 2016 it would allow its wealth management clients to choose the way they pay the firm for retirement accounts. In June 2017, UBS said the advisors’ part of its U.S. wealth management business would be paid based solely on the amount of assets, not the volume of transactions or the products they recommend, for retirement accounts.

Out of the $2.3 trillion in Merrill Lynch client balances, only about $150 billion were in brokerage IRAs as of June 2016 and that number has since shrunk to about $100 billion today, according to another Merrill Lynch employee familiar with the accounts, who declined to share how much money had been moved to the limited-purpose accounts.

Most of those accounts belong to two client groups that, even after a reduction in advisory fees on the accounts, preferred commission-based brokerage for their retirement accounts, the Merrill Lynch executive said.

The ultra-high-net-worth segment often prefers their retirement accounts to be managed through a brokerage relationship. The wealthiest clients, focused on the tax advantages of the accounts, often have large retirement account balances and could, potentially, end up paying much more in advisory fees than they would in commissions. The other group, which the executive said make up the majority of the accounts, skew toward older clients who are relatively inactive in terms of changes they make to the investments in their retirement account, so paying occasional commissions could ultimately mean paying less than an advisory fee based on a percentage of the account’s value.

Still, even with costs aside, there were clients who opted for the brokerage relationship, though, the Merrill Lynch executive said the wealth manager does not expect many clients to move their retirement accounts from advisory to brokerage.

Although advisors will again be able to serve all clients’ retirement accounts in a brokerage capacity like they did before, the Merrill Lynch executive said the primary way the wealth manager serves clients is through the brokerage’s Investment Advisory Program.

This story is developing and will be updated this afternoon.