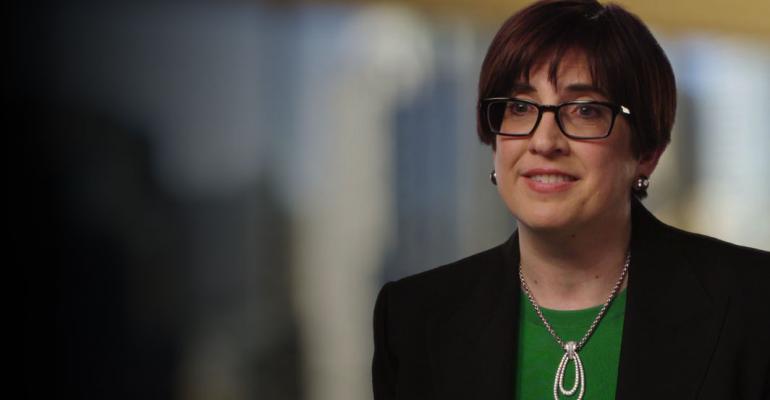 Dodge & Cox and Charles Schwab Corp have the highest share of female portfolio managers, according to Morningstar Research.

(Bloomberg) --Women who want to manage money seem to be having better luck doing it someplace other than Wall Street.

U.S. firms with the highest share of female portfolio managers are located thousands of miles from Manhattan, according to new Morningstar Inc. research. Dodge & Cox and Charles Schwab Corp. -- both with headquarters in San Francisco -- are top ranked at 30 percent and 28 percent, while Franklin Resources Inc., with $724 billion in assets as of June 30, is tied for the third and based in nearby San Mateo, California.

Academics, consultants and some of the women entrusted with investing these companies’ trillions say the reasons include deeply rooted old-boy networks, ineffective recruiting, lack of mentoring and an absence of mid-career on-ramps for women who leave to care for children in the industry’s Northeast corridor.

“In ranking them, you do see quite a few firms based outside of the traditional Wall Street world, where perhaps firms have had better luck developing more women managers or it’s been more of a priority,” said Laura Pavlenko Lutton, Morningstar’s director of manager research practice for North America. 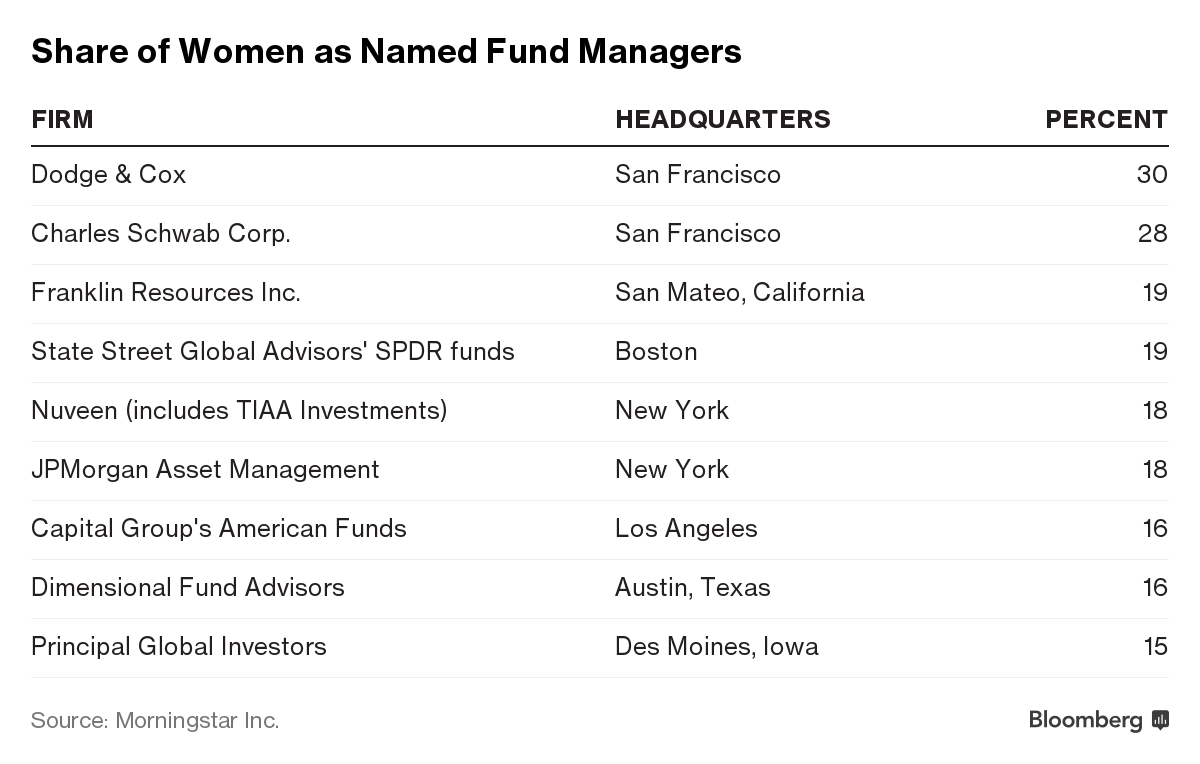 The “open approach’’ of the West Coast’s entrepreneurial spirit also may be an influence, according to Alexis Krivkovich, a partner at McKinsey & Co. and head of the firm’s Silicon Valley office.

Dodge & Cox, with $309 billion in assets under management, operates “as a meritocracy first and foremost,” Dana Emery, CEO, president and director of fixed income, wrote in an emailed comment. “We thrive on debate in our collaborative, team-based culture.”

Having senior women at Schwab “is helpful in terms of being a role model, maybe setting a culture that encourages diversity,” said Marie Chandoha, CEO and president of the investment unit, which manages about $360 billion.

To arrive at its ranking, Morningstar juxtaposed headquarters locations with the share of named women managers for mutual funds of all asset classes and investment styles (including passive and active). It excluded exchange-traded funds, so percentages otherwise might be higher for ETF leaders such as BlackRock Inc., based in New York. Portfolio managers are an important indicator of diversity because their measurable investing results determine fund-firm reputations.

Americans have about $20 trillion in U.S. mutual funds, and studies show women participating in their management has bolstered some returns, so more female advancement in any location is definitely a positive.

The national average is about 10 percent, but even some firms with lower shares have women overseeing their largest or bellwether products. Gemma Wright-Casparius heads four debt funds and co-manages another at Vanguard Group Inc. in Valley Forge, Pennsylvania, where about 8 percent of mutual-fund managers are women. San Francisco-based Jasmita Mohan and Karen Uyehara jointly run the iShares Core U.S. Aggregate Bond ETF at BlackRock, which has a 7.2 percent share, based on the Morningstar criteria.

Despite its reputation for innovation, the Bay Area still is far from a paradise for women, given the domination of men in technology. And some women feel it’s important to be in the financial hub. Kristi Mitchem, CEO of San Francisco-based Wells Fargo Asset Management, says she’s spent a lot of her career commuting back to the East Coast “to remain relevant.’’

“It’s not just your professional life, it’s your personal life and where your spouse may work,” she said. “But it certainly wasn’t, for me, a feeling that I needed to be out of New York and Boston.”

Her engagement to now-husband Thomas Mawhinney, a Palo Alto-based venture capitalist, was the catalyst behind her decision to move to California. And she says several companies supported her along the way.

Former employer Goldman Sachs Group Inc., for example, provided a New York apartment for her and her daughter (as well as a nanny) so she could work there full time. It flew them back home each weekend.

The culture of individual organizations is key to gender diversity, said Barbara McKenzie, senior executive director of investments at Principal Global Investors in Iowa, though she sees how geography can play a role. (Principal, with $451.1 billion in assets, ranked ninth in the Morningstar analysis.)

Because the firm’s headquarters are in Des Moines, “it’s also about nurturing and developing talent because you can’t just walk down the street” for qualified prospects, she said.

McKenzie cites several Principal initiatives that were key for her success. In the early 1990s, she was selected to work closely with the executive team, an effort the firm used to develop female talent. Principal also ran a women-in-asset-management program for several years, inviting female college finance majors to work with female investment heads. And it currently has a joint initiative with the University of Iowa to promote women in finance.

Jane Qin, 39, an international equities portfolio manager at Schwab, says she didn’t research the male-female ratio before joining the San Francisco firm in 2012 but having a woman boss -- Chandoha -- was an attraction. And being on a trading floor with a lot of other women “is very different, very rewarding.”

The mix also has influenced the funds’ controls, because men tend to be bigger risk takers than women, she added.

One other benefit: Being on the West Coast makes her role as a mother easier, because her schedule “can be very predictable” -- she can leave about 3:30 p.m. and spend afternoons with her three children, ages 6 (twins) and 11.

“Working New York hours, we end up going home so much earlier than other people,” Qin said. “We beat the traffic.”