In a flash poll fielded by WealthManagement.com, most Ladenburg advisors have a neutral view on the purchase; a few said they would take the opportunity to examine options with other firms; half said they would expect the new owners to pay a retention bonus.

By now, advisors at Ladenburg Thalmann’s five broker/dealers have had some time to digest the news that they’ll soon be part of Advisor Group, which announced its acquisition of the firm Monday evening. Executives at both firms assured advisors on a conference call Tuesday that the change of ownership would bring benefits to their businesses and cause little disruption, saying that the firm's multi-custodial/multi-clearing approach would remain in place and that no repapering of client accounts would be necessary.

According to a flash poll completed by some 75 Ladenburg advisors conducted by WealthManagement.com on Wednesday, most advisors say they're not completely buying that story yet but are cautiously optimistic as they take a wait-and-see approach.

“Anytime there is a change like this, I become apprehensive,” wrote Richard Gale, an advisor with KMS Financial Services. “So I am alert to any negative repercussions, but based on the information I have now, it looks like a good move.”

“We will wait and see how this will all work through,” wrote Robert Hamm, an advisor with Triad Advisors. “A marriage is always great during the honeymoon, but could be a lot different in year 3-5 when the sweet-talk is over and reality sets in with change as the new norm.”

The majority of advisors had a neutral view of the acquisition (51%), while a quarter expect it will positively impact their business and 24% expect it to have a negative impact. To be sure, a flash poll lacks scientific precision, but it can give some indication of prevailing attitudes among advisors whose businesses will be affected by the change in ownership. 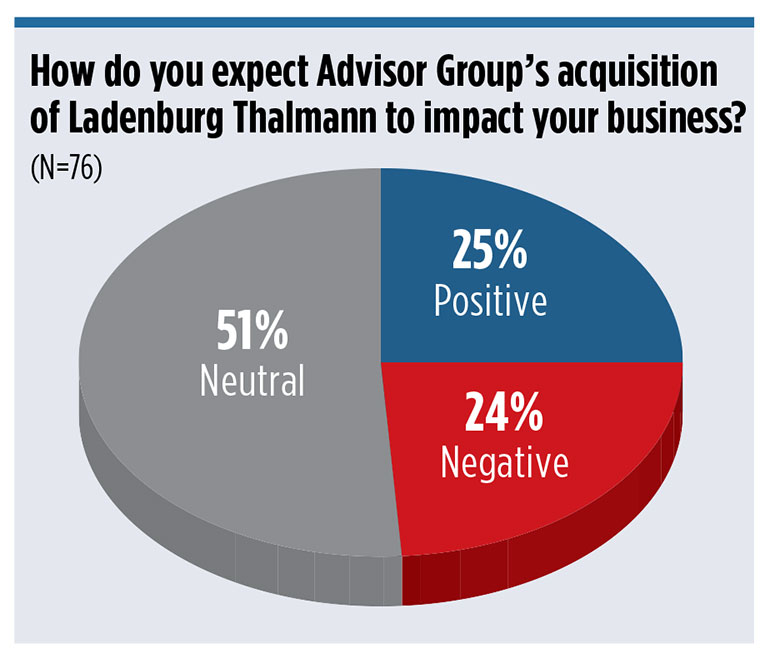 Some advisors said they were particularly positive on the possibility of new technology that Advisor Group may bring to their practices. Advisor Group said it plans to implement its eQuipt digital client onboarding system, the MyCMO digital marketing platform, its succession planning offering MySuccessionPlan, and the CyberGuard Program for cybersecurity. Sixty-three percent of respondents indicated that the new tech would indeed help their practice. 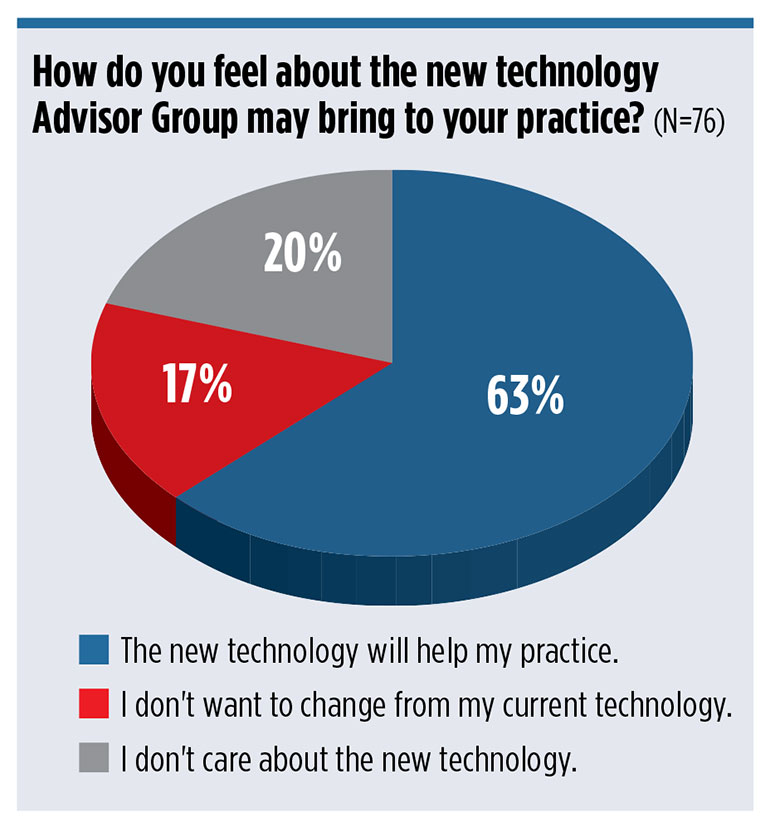 On the broker/dealer side, larger firms can often spend more to streamline processes and procedures than smaller firms, especially when it comes to technology, said Philip DeAngelo, managing director with Focused Wealth Management, which uses Securities America for brokerage business. “We’re big on technology in our office, and I think from a technology standpoint and a back-office standpoint, I would think that things would start to run smoother than ever. Costs should also come down, slightly, because of the size.”

At the same time, 45% of advisors said the change of ownership will prompt them to consider their options with other firms. Many said that they’ve already received calls from outside recruiters.

“The recruiting calls and offerings from other broker-dealers to our office began immediately,” wrote Brent Sikes, an advisor at Triad Advisors. “It would be foolish for them to underestimate the loss of advisors by not offering a retention package.” 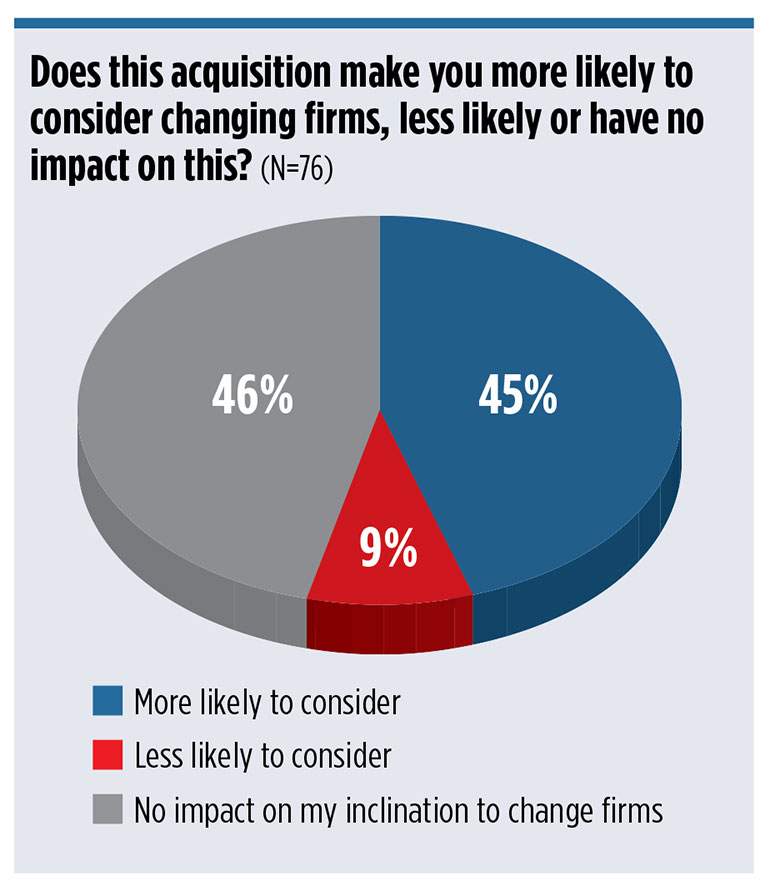 In an interview with WealthManagement.com, Advisor Group CEO and President Jamie Price said it’s too early to consider whether Ladenburg advisors will be offered some kind of retention package; he implied there was little need for it since the two firms are on the same clearing platforms and there will be no account number changes for clients.

About half of the advisors who responded to the poll said they would have expected some type of retention package; half said they hadn’t expected anything. 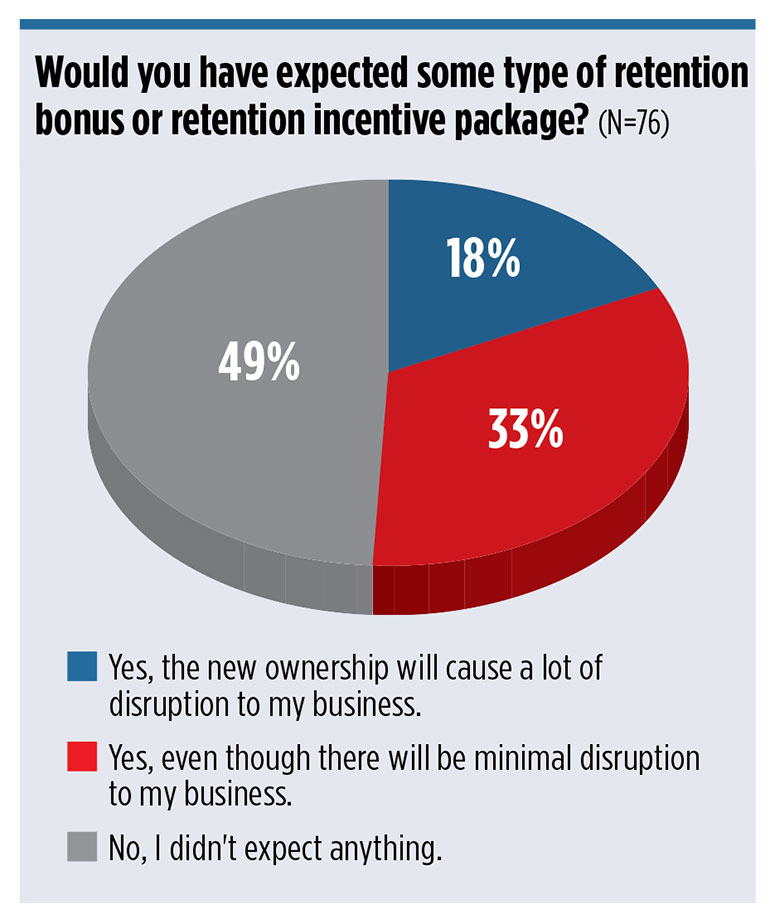 “No decisions have been made with respect to advisor retention bonuses,” said Adam Malamed, executive vice president and chief operating officer of Ladenburg. "It’s understandable that after the announcement of a transaction that advisors would have questions and want additional information and assurances, which we are in the process of providing. We are pleased that the vast majority of advisors we have spoken with so far recognize the advantages of this transaction. In particular, our advisors understand this transaction will not require repapering of client accounts, and that Advisor Group supports the same clearing and custodial firms as Ladenburg, so no disruptions are expected. Equally important, our advisors can see the advantages of the increased resources, expertise and tools that our two organizations together can deliver.”

While most advisors indicated that they will wait and see what happens as the new owners take control, some expressed frustration at the prospect of their broker/dealer going through yet another change of ownership. One advisor said this would be his fifth ownership change in recent years, and the added burden of reassuring his clients while still running his day-to-day business was exhausting.

“It was very important for my client retention to seek stability,” wrote David Barol, who moved to Securities America in March after his former broker/dealer, Questar, closed. “I am disappointed this is happening less than a year after we were reassured [Ladenburg] had no reason to sell its broker/dealers.”