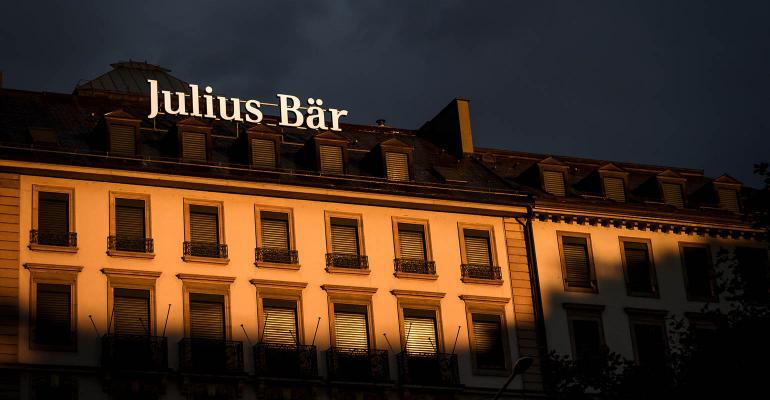 Julius Baer has closed or sold four offices in the Americas since 2019, but is growing in Brazil, Mexico, Chile and Colombia, where it’s considering acquisitions, strategic alliances and joint ventures.

(Bloomberg) -- Julius Baer Group Ltd. is deciding whether to start a wealth-management business in the U.S. as it seeks partnerships or acquisitions in its core Latin American markets.

“I would not be doing my job as somebody that is totally committed to making our Americas’ business a top competitive business for Julius Baer if I wasn’t seriously looking at a U.S. platform,” Beatriz Sanchez, the bank’s head of the Americas, said in a virtual interview from Switzerland.

Julius Baer has closed or sold four offices in the Americas since 2019, but is growing in Brazil, Mexico, Chile and Colombia, where it’s considering acquisitions, strategic alliances and joint ventures, Sanchez said. The goal is to be among the top five wealth managers in Latin America. Sanchez has previously said the bank ranks roughly sixth or seventh among international private banks in the region.

Miami and New York are key locations where wealth managers book transactions for high-net-worth individuals from Latin America. But the Zurich-based firm is considering whether its expansion will include other types of investors as well.

“The question about a U.S. platform is: Which type of operation do we want, and to cover what markets? And that is a decision that we take very seriously,” Sanchez said, declining to give more details on what’s being considered.

The bank said last year it was planning to expand in the Americas, and Sanchez indicated the pandemic won’t prevent those plans from moving forward.

One potential obstacle to the bank’s expansion plans: Swiss regulators have banned Julius Baer from making “large and complex” acquisitions as punishment for failing to do more to prevent money laundering in its Latin American operations. The bank was ordered to overhaul its money-laundering measures and change the way it recruits, manages and pays its bankers.

Sanchez said those investigations were from practices in place before early 2018. Since then, the bank has gone through a “tremendous remediation process,” reinforcing its codes of conduct and making sure “we have all the knowledge about a client,” she said. Now it’s “focused on the future.”

Julius Baer’s possible expansion in the U.S. compares with the strategy of one of its main competitors, Credit Suisse Group AG, which left America several years ago after agreeing to pay the Department of Justice a $2.6 billion fine for helping customers dodge taxes. Chief Executive Officer Thomas Gottstein said earlier this month that the bank should “examine” that decision, though it had no immediate plans to return.

In Brazil, Julius Baer’s largest market in Latin America, the bank completed in February the merger of two local wealth-management firms it acquired into a business with about 50 billion reais ($9 billion) in assets under management and 200 employees. The combined operation is now working on integrating cultures and investing in a new technological platform that should be ready by the end of next year, according to Jan Karsten, the bank’s chief executive officer for Brazil.

Initial public equity offerings are booming in Brazil this year, and that’s unlocking liquidity for wealthy clients and bringing more business to wealth managers, Karsten said in a joint interview with Sanchez. But the global Covid-19 outbreak has created obstacles.

“We barely had the time to work in the same place, and the pandemic hit,” he said, adding that the two floors they moved into in August last year in a building in Sao Paulo’s financial center have been almost completely empty since March. They’ll stay that way as long as infection rates remain high, Karsten said, adding that Julius Baer is letting employees decide for themselves whether to go back to the office, including in Rio de Janeiro and Belo Horizonte.

Julius Baer can invest more in the business, but Magnetis will remain independent, according to Karsten.

In Mexico, Julius Baer owns 70% of NSC Asesores, an independent financial-advisory firm. The Swiss bank also opened a representative office with plans to hire more employees, and could end up pursuing an acquisition strategy similar to the one in Brazil, Sanchez said.

Chile is another growth market for Julius Baer. The firm has about 20 employees there, and is the largest international bank operating a wealth-management business, according to Sanchez. An agreement with Santiago-based Banco BICE allows clients to use the local bank’s platforms, products and expertise, while Julius Baer supports Banco BICE’s customers and bankers with training and opportunities internationally.

In March, Julius Baer received a license for a representative office in Colombia, and is weighing an expansion strategy for the country, Sanchez said.

The bank closed local businesses in Peru and Panama in 2019, and this year shut one of its offices in Uruguay that was dedicated to serving local residents. It kept a team of close to 60 people there serving only non-resident clients in the country.

“We are actually hiring more individuals for the international aspects of our Uruguayan operation,” which is mainly market coverage for Argentina, Sanchez said.

Chief Executive Officer Philipp Rickenbacher has been stepping back from the company’s previous emphasis on expansion, and asked for 300 job cuts in February. Part of the pullback included selling its local business in the Bahamas, a booking center for clients from Latin America and elsewhere.

Sanchez said the goal is still to double assets under management in the Americas in three to five years. As of November, Julius Baer managed about 40 billion Swiss francs ($43 billion) of assets for Latin American clients, and had 500 employees dedicated to those customers. Now, the total staff number has grown to 550.

Swiss rival UBS Group AG had around 108 billion francs, according to an investor presentation in 2018. The leading bank, JPMorgan Chase & Co., had about $140 billion as of June, the New York-based company said.

“We have taken a look at our Latin American footprint and decided that the focus needs to be in de-complexing and concentrating in markets where we can have an impact,” Sanchez said. “That fit with our long-term strategy of being one of the leading wealth managers for the region.”