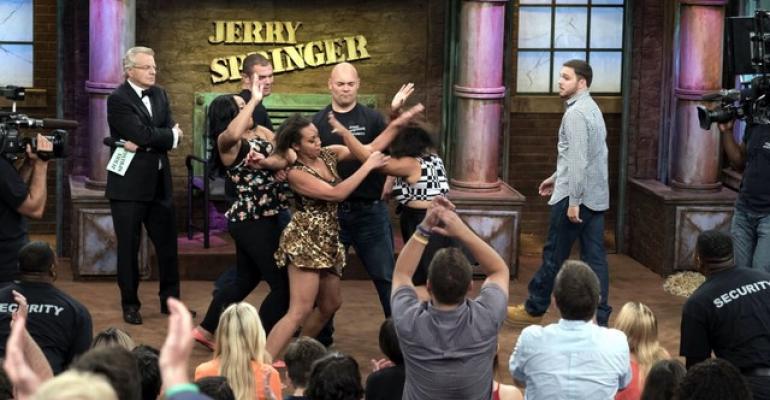 'The Jerry Springer Show' Comes to the Fed

Board members recently engaged in some metaphorical public shouting and chair throwing.

Most of us remember The Jerry Springer Show that ran on TV for nearly 30 years. Episodes would feature family members shouting at each other, throwing chairs or otherwise engaging in embarrassing conduct centered on some dispute. Often, these arguments would revolve around infidelity, disclosing secrets or bringing some other dishonor to the family.

Something very similar just happened at the Federal Reserve.

As even casual Fed watchers will recall, Chairman Jay Powell, for months, assured the public that incipient inflationary pressures were "transitory," and that he and the board had things well in hand. He stuck with this unfortunate term well into Q4 of 2021, despite persistent inflation in prices for energy, food, construction materials, autos and on and on.

He recently reluctantly retired the word, but by then everyone knew that a new cycle of inflation was well underway. Everyone, of course, includes the rest of the members of the Federal Reserve Board, including one James Bullard, of the St. Louis Fed.

Bullard, who has a history of speaking his mind, stated in a recent interview that “[he’d] like to see 100 basis points [increase in interest rates] in the bag by July 1,” noting that he was already more hawkish but pulled up dramatically what he thinks the committee should do.

This shocked the conscience of the other Fed members, since Bullard was saying things that they would rather have kept private. One simply does not tell such tales out of church.

A round of tut-tutting quickly ensued, culminating in a television appearance several days later by Roger Ferguson Jr., a former vice chair of the Fed, who retired 16 years earlier. Apparently someone thought this might be seen as a grandfatherly attempt to bring Bullard back into the fold, without having a currently active board member rebuke him publicly. Ferguson spoke more in sadness than anger, and said that while Bullard was a free agent, able to speak his mind, he didn't speak for the entire family, err ... the full board, and, in effect, that Bullard, probably is very sorry that he said such inflammatory things and that he shouldn't air family business in that way.

Incredibly, Bullard followed Ferguson by about a half hour. If anyone thought Ferguson's attempt to moderate Bullard's comments would work, they were grossly mistaken.

Bullard not only reiterated his earlier comments, but did so quite emphatically. He claimed that "the credibility of the Fed was on the line." He also added for good measure that the long-held belief that there was a "Fed put," an unofficial but widely assumed backstop against a stock market decline, did not exist.

This is roughly the equivalent in Fed world of a Jerry Springer guest throwing a chair at his mother and pushing her off the stage. And he did it all with a wry smile. Good times.

Going back to at least the enigmatic Alan Greenspan, whose oracle-like musings baffled congressional committees and investors alike, the Federal Reserve chairman has tried to control the "narrative," to use an au courant term. Bullard's comments disrupt that effort, to put it mildly.

I don't know about you, but I'm staying tuned for the next episode.

Dean Smith is chief strategist and portfolio manager at FolioBeyond.