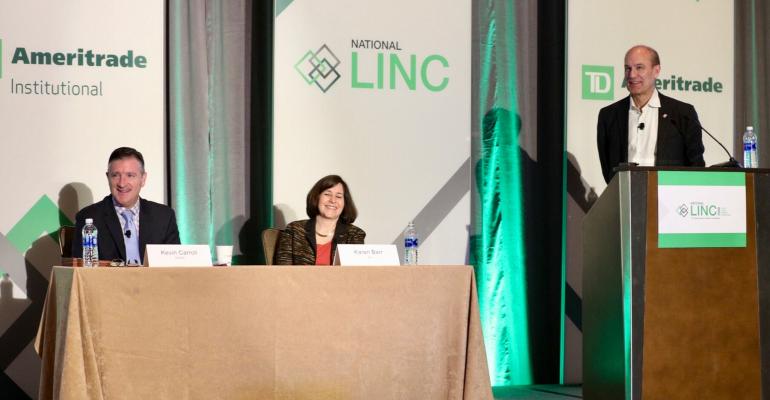 At TD Ameritrade Institutional’s advisor conference Friday, leaders from two of the largest industry advocacy groups said they understand the SEC will unveil their proposal for an industry best interest standard “within the next three to five months.”

Leaders from two securities industry groups said Friday morning they expect a “best interest” rule proposal from the Securities and Exchange Commission this summer, but beyond that, details were scarce.

Karen Barr, president and CEO of the Investment Adviser Association, told attendees during a panel discussion at TD Ameritrade’s National LINC conference that her organization expects the SEC to release a proposal in the next three to five months. Kevin Carroll, the managing director and associate general counsel for the Securities Industry and Financial Markets Association, said his group had heard the same.

But Carroll and Barr said they could only speculate on the nature of the highly anticipated proposal that has been years in the making. Since the creation of the Department of Labor’s retirement-savings rule, many in the industry have called for the SEC to create a uniform, federal rule that applies to more than retirement accounts.

The most recent timeline is the most exact-to-date by the organizations. In December, SIFMA leaders said they expected the SEC would propose a best interest standard before the implementation of the DOL’s retirement-savings rule, based on dialogue directly with SEC Chairman Jay Clayton and U.S. Secretary of Labor Alexander Acosta.

In November, the DOL announced an 18-month extension of its so-called fiduciary rule until July 1, 2019 to allow time to complete a review and consider alternatives, as directed by President Trump.

Barr and Carroll said their organizations have actively lobbied on the details of fiduciary rules at the federal and state levels. Both organizations have sent letters to the SEC regarding its rule proposal and they are actively meeting with state legislators out of fear for them passing legislation that could fracture and complicate the regulatory environment.

Since Nevada’s own fiduciary rule was signed into law June 2, 2017, Nevada State Sen. Aaron Ford said he was contacted by several politicians from other states regarding similar rules. Rulemaking is still underway in Nevada, after SIFMA formally told regulators there they should forego doing so. In December, New York State’s Department of Financial Services proposed regulations that would require sellers of life insurance and annuities to act in the best interest of clients.

Barr said she is aware other organizations such as the CFP Board and the National Association of Insurance Commissioners also have interests in details of the SEC’s rule and that pressure from many angles is perhaps pushing rulemaking closer—maybe in the next 12 to 14 months, after the SEC proposal comment period.

Advisors that organizations represent are also eager to see how the proposal pans out.

“I’m scared to death of what states can do” because state legislators have “a complete lack of understanding of the complexity on these issues,” one attendee, who said he owns a broker/dealer, said during a question and answer session with the panelists.