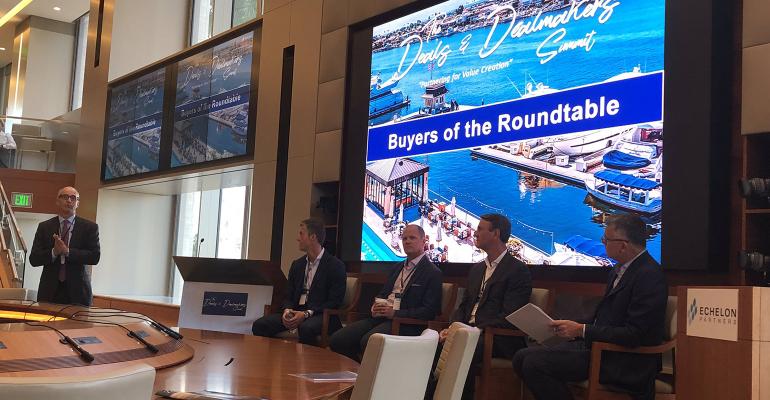 How a Market Downturn Would Devastate RIA Valuations

Despite a red-hot M&A environment in RIA land, the cost to buy a firm is not yet excessive, argued participants at Echelon Partners' recent Deals & Dealmakers Summit. Still, a market downturn could slash valuations dramatically.

Several hundred advisors, investors and financial services executives came together at Dan Seivert’s Deals & Dealmakers 2019 Summit in Newport Beach, Calif., this week to discuss the state of mergers and acquisitions in the registered investment advisory industry.

Jim Crowley, CEO of BNY Mellon Pershing and moderator of a Buyers of the Roundtable session, asked the leadoff question that seemed to set the tone for the conference: With a near record number of mergers and acquisitions in the industry, many touching record-high valuations, “Are we in a deal bubble?”

Kurt Miscinski, president and CEO of Cerity Partners, said no, “especially not for sellers who wish to have a consideration in equity.” Dave Welling, CEO of Mercer Advisors, agreed, saying that “there is still discipline on the buy side and we have not seen valuations get crazy yet.”

But others had a different view. Rush Benton, senior director of CapTrust, said seeing multiples of EBITDA in the high teens for RIA firms “feels a bit bubblish.”

Dustin Mangone, a director with PPC Loan, chimed in during an afternoon financing session, and said his view was that in the heat of the current market, buyers are taking undue risks. “If there is a significant market correction, where prices are far exceeding valuations, buyers have been absorbing risks – many without clawbacks and other provisions — so there is not much protecting buyers.”

Seivert said his firm sees a record-high volume of deals in 2019 but with growth in the number of deals slowing. He expects the number of deals to pass 200 in 2019 for the first time, driven by an increase in peer-to-peer transactions and rising private equity interest.

That rate of growth in deals, however, would be somewhere over the 11% from 2018 but below the 16% annualized compound growth rate since 2009. He said valuations were not at an all-time high but that RIAs in the sweet spot of the market are still “very attractive to buyers and are trading at way too low a cost.”

“Fast growing firms are getting the wrong end of the deal,” he said, and could be demanding higher valuations.

Still, Seivert said a case could be made for selling now, noting that, hypothetically, if the Dow Jones Industrial Average were to drop by 20%, firms could see a 70% loss in their valuation. How? Consider a firm running at 25% profit margins. A 15% drop in revenue will slash those margins by more than 50%, assuming the firm does not cut costs. Add on to that an expected lower multiple in a down market, and a firm’s valuation can evaporate faster than many think.

That has implications for firms that will have to deal with retiring partners who will face lower payouts, and incoming principals who have bought into firms at a higher valuation, only to see their equity take a significant hit.

He also noted that while much of the M&A this year has been focused on companies with more than a billion dollars in assets, buying a smaller firm may be a better deal for some acquirers.

Firms with up to $500 million in AUM, he said, are “underappreciated” in the market but are a “huge opportunity” because that is the level where RIA profit margins tend to peak around 20% to 60%. After that, as AUM rises, profit margins collapse, a phenomenon Seivert calls the “Valley of Doom.” At $1 billion in AUM, Seivert estimates firm margins are anywhere from upper single digits to a lower range of 20%.

Why? Once a firm goes over $500 million in assets under management, he said, it tends to spend a lot more money on acquiring executive managers, which cuts into profits. Still, the record shows private equity firms tend to prefer larger targets with a minimum of $3 million in EBITDA, because they are looking for an “insurance policy” if markets stumble.

On the flip side of private equity, Seivert argued in a staged debate the position that public markets were not the best place for wealth managers to operate. He took aim at Focus Financial, pointing out that since its IPO about a year ago, Focus’ shares have fallen about 51%, leading him to wonder “has something happened to the firm?”

Seivert argued that Focus’ swoon is more than just riding a dip in financial stocks. It begs the question, “Do people no longer believe in Focus? The firm has taken on so much debt, there is increasing competition; they’re missing earnings estimates.”

“We’ve seen before when National Financial Partners went public — out of the gates they were very strong [but then] the stock performance went down,” he said.