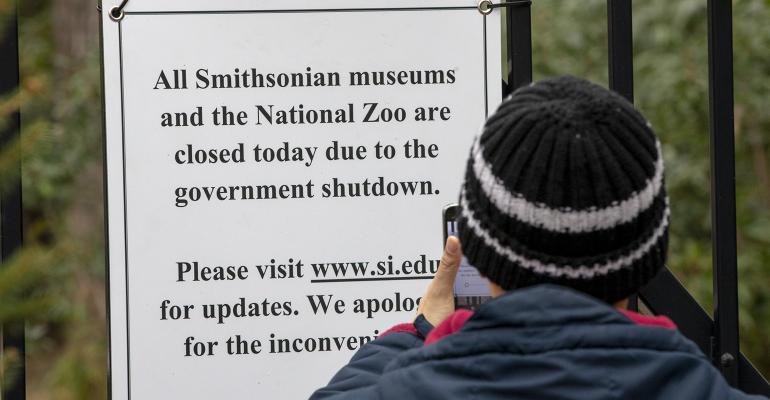 How Advisors Are Navigating a Partial Government Shutdown

While the partial shutdown is an immediate threat for clients, President Trump’s executive order has the potential for a bigger impact.

Financial advisors working with federal employees tend to have a pretty straightforward task: helping to manage what is usually, generally, a reliable, livable income. Compared to clients who might receive large bonuses or who change jobs frequently, federal workers tend to be more predictable. But all that can change quickly when the federal government completely or even only partially shuts down.

Because of the timing of the most recent partial government shutdown, which began at midnight on Dec. 21, many “essential” and furloughed federal employees haven’t had their paychecks impacted, reported The Washington Post. But should the shutdown continue, or if paychecks aren’t retroactively restored, those federal employees may need to start drawing down from their emergency funds, put off large purchases or pause contributions to college savings and retirement accounts, warned financial advisors. Government contractors will likely not be able to recover lost revenue and wages.

According to a 2015 study on the “liquidity shock” of the 2013 federal government shutdown, which lasted 16 days, many federal workers “were ill-prepared to use liquid assets to smooth even this brief and fully reverting pay shock,” carrying low amounts of cash in checking and savings accounts. While some of the top third of the earners who were affected in 2013 could maintain more than a month of average spending with the cash they had in their checking and savings accounts, “even among those with steady employment, large fractions of workers do not have the liquid assets to absorb a large, but brief, shock to their pay,” noted the report. Underscoring the need for advisors to help their clients establish and maintain an emergency fund, the report stated that “the median worker in the data held an average liquid assets balance sufficient to cover just eight days of average spending.”

Because the 2013 shutdown took place in October, end of the year holiday spending didn’t have as much of an impact on liquidity. The timing of this shutdown, however, might have more of an impact. Clients who depleted an emergency fund for holiday gifts, for example, could find an extended partial shutdown more stressful than they otherwise would, said Patrick Ortman, founder of Ortman Financial Planning in Annapolis, Md. Ortman said he’d already met with clients who are government employees, including “essential personnel” who are expected to work without pay, as well as furloughed employees who don’t need to report to work. He also advises government contractors, a group that most likely will not be receiving retroactive pay when the shutdown ends.

“It’s never easy,” Ortman said of government shutdowns. “Ideally, all clients should have an emergency fund and so I tell government employees not to stress it when a shutdown occurs.” An emergency fund that would cover three to six months of expenses, with government contractors planning for a six-month fund, is his standard recommendation.

For clients who might need to pause contributions to a retirement or 529 account, but who are expected to receive back pay, Ortman recommended doubling the next contribution. Contractors who will not be receiving a retroactive paycheck are probably fine just skipping a contribution, he said. “One missed $300-a-month contribution to a 529 account shouldn’t dramatically change their projection for college funding,” he added. If the shutdown is resolved by Friday, Ortman doesn’t expect a large impact on federal employees. If the shutdown stretches a month or more it very likely could create bigger problems.

“The challenge with government employees in this situation is you just don’t know how long the shutdown will last,” said Paul West, managing partner at Carson Wealth Management based in Omaha, Neb. He predicted that a 30-day shutdown would “begin to dramatically increase the stress level,” while “true economic injury” would be inflicted by a 60-day or longer shutdown, particularly if clients have no other income sources or adequate emergency funds.

In 2013, federal employees responded to the liquidity shock of the shutdown by delaying mortgage and credit card payments, according to the 2015 study. Credit card spending, on average, did not dip and adjusting the timing of a mortgage payment, or even making a late payment, served as a “source of credit that is available without the burden of applying for credit.”

For his part, West recommended that clients simultaneously control their expenses, in case this shutdown lasts longer than previous ones, as well as turn to emergency funds instead of tapping into tax-deferred vehicles.

There are long-term consequences to the shutdowns for clients, however. When a client is weighing a job change from the federal government to the private sector, state government or academia, the frequency and length of federal government shutdowns begins to factor into the decision, said Micah Porter, president and CEO of Minerva Planning Group in Decatur, Ga. “When we start comparing benefits … you start looking at stuff like this,” he said. “The federal government is really one of the few large employers that will do something like this.” Although he hasn’t deviated from the traditional advice of three to six months of expenses in an emergency fund, he is considering upping his recommendation for federal employees, because he’s concerned about an increase in the frequency of shutdowns.

While it is hoped that the current partial shutdown should ultimately be a mere historical blip, President Trump’s executive order, issuing a 2019 pay freeze for civilian federal employees, will have a bigger impact on clients, said Ortman. “Again, it’s something a little outside of their control,” he noted, “but if they don’t get a two percent pay bump, that is the equivalent to a week’s pay, give or take, for government employees.” Unlike a paycheck that is expected to be retroactively reissued in the event of a government shutdown, freezing a raise means that additional pay never appears.

Pay freezes and below-inflation raises add up, said Porter, risking the retirement lifestyle federal employees hope to achieve. The government’s retirement system is based on a formula that includes a worker’s highest salary and the length of time they’ve worked in the federal government. Pay freezes undermine the formula. “It really has an impact on clients’ ability to live as they want to in retirement,” he added.