/sites/all/themes/penton_subtheme_wealthmanagement/images/logos/footer.png
Recent
Recent
London Gets Back to the Office, But Bankers Drag Their Heels
Jan 24, 2022
Seven Must Read for the CRE Industry Today (Jan. 25, 2022)
Jan 24, 2022
What the Past Year Has Brought for a Newly Launched Investment Management Firm
Jan 24, 2022
City of London’s $10 Trillion Chinese Hub Plans for Growth
Jan 24, 2022
Featured
The 10 Best and 10 Worst States in Which to Retire in 2021
Jul 15, 2021
Poll: 15 Classic Books on Investing and the Markets
Apr 03, 2020
25 U.S. Markets Adding the Most Multifamily Units This Year
Feb 03, 2021
Fifteen Must-Listen Business Podcasts for Advisors
Aug 14, 2020
TD Ameritrade National LINC Conference
brought to you by 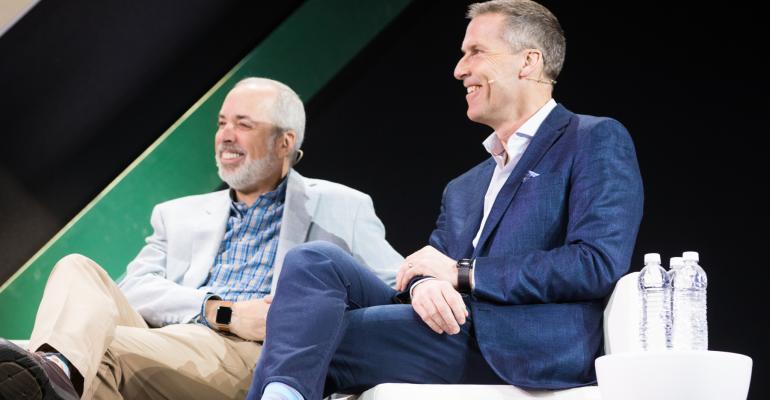 How Advisors Are Fielding Client Questions on Cryptocurrency

Their future is unknown and that requires more education for both advisors and clients, according to panelists at the TD Ameritrade Institutional’s conference for financial advisors.

It was expected that an advisory conference panel on technology and innovation in wealth management—at one of the largest annual gatherings for financial advisors, no less—talk would eventually turn to cryptocurrencies.

“I’m willing to bet that the vast majority of clients have asked about [cryptocurrencies], how could you not?” Ric Edelman, executive chairman of Edelman Financial Services, said Feb. 1 at TD Ameritrade’s National LINC conference.

TD Ameritrade President and CEO Tim Hockey, a panelist alongside Edelman at his company’s conference, acknowledged that the future of cryptocurrencies is unknown and evolving.

“Everyone is struggling” with how to define cryptocurrencies, he said, but “like anything else, it will sort itself out over time, it will mature.”

Roughly 3,200 registered investment advisors attended the conference this year and nearly all of them stuck around for the technology discussion panel following the kickoff opening remarks by TD Ameritrade Institutional President Thomas Nally.

Edelman called the cryptocurrency market the “wild west” where extreme volatility is normal and fraud and theft are rampant. As a result, the Securities and Exchange Commission is paying more attention to the new asset class, although the Internal Revenue Service is currently treating cryptocurrencies as property, rather than securities, he said. But that could change.

For those reasons, Edelman said no portfolio should allocate more than 1 percent of a client’s assets in cryptocurrencies. “Treat it like a lottery ticket,” he said. The price of bitcoin fell 15 percent over the first two full days of the advisor conference.

“The words investing and Bitcoin shouldn’t be used in the same sentence,” said Carol Schleif, the deputy chief investment officer at Abbot Downing, who said in December that buying cryptocurrencies was like gambling.

However, Edelman said there is legitimacy in cryptocurrencies and if clients are asking, advisors can’t “stick their head in the sand.” They need to educate themselves and be able to help clients make informed decisions if they’re interested in it.

That’s the approach taken by Erika Safra, founder of Safran Wealth Advisors, a fee-only financial planning and investment firm in New York City. She doesn’t present cryptocurrencies as an asset class like she would stocks or even alternative investments because it “requires a tremendous amount of client education and expectation management.” However, if a client expresses interest, Safran advises them on whether they should buy cryptocurrency, walks them through the decision and ensures they understand the risks.

Safran was aware that Merrill Lynch and other brokerages had barred their advisors from pitching cryptocurrency and said she understood why. Valuing cryptocurrencies is difficult—cryptocurrencies are not tied to any other asset—and the wild swings in price could wreak havoc on a portion of a portfolio that a client has sole control over.

Bitcoin, for example, began 2017 below $1,000 and reached a high of nearly $20,000 in mid-December. Since then, the cryptocurrency sawed down to $8,535 as of 4 p.m. Friday, according to Coinbase, one of the most popular cryptocurrency exchanges.

Unlike more traditional investments, there is no easy (and compliant) way for an advisor to open accounts on cryptocurrency exchanges, transfer funds to them and execute trades on a client’s behalf. The most an advisor can do is give advice and hope a client listens.

One of the benefits of having an advisor is that they serve as a layer of defense against panicked trading and other potentially harmful, knee-jerk client actions. Relinquishing that control is a risk in itself, especially with a highly volatile asset.

“I think it’s challenging for advisors,” Safran said about cryptocurrencies, “until there is less volatility.”

Safran said it’s easier for the advisor and clients interested in cryptocurrencies to invest in new derivative products, like Grayscale’s Bitcoin Investment Trust Fund and bitcoin futures contracts recently launched by CME Group and Cboe Global Markets. But the future of cryptocurrencies and their prices in the long run is still unknown and Safran is keeping an open mind.

“I have no patience for black and white solutions to something that is not fully understood,” Safran said. “Don’t say everyone should or no one should [buy cryptocurrencies].”

A few advisors, who attended the panel discussion Edelman participated in, told WealthMangement.com they agreed with his approach to cryptocurrencies and had taken similar steps to field client questions.

Another advisor, who didn’t want to share his name, admitted he had done little research on cryptocurrencies and wouldn’t feel comfortable advising clients on them, beyond telling them they’re volatile and risky. The same advisor said he could only name a few cryptocurrency exchanges—only because their names were in the media for having paused trading or had cryptocurrencies stolen from them.

Liquidity and trading costs are lesser issues that advisors bring up with clients when it comes to cryptocurrencies. During the run-up in bitcoin’s price last year, exchanges frequently paused trading, preventing account holders from both executing trades and converting their holdings into cash, and some are no longer allowing new accounts.

None of the advisors WealthManagement.com spoke to had clients with enormous cryptocurrency holdings, that is, in the millions of dollars. But the cost to trade even modestly large positions could be more expensive on some exchanges. Coinbase, for example, charges U.S. account holders a 1.49 percent fee to convert holdings into cash and transfer them to a U.S. bank account.

Unlike a client with a large stock position, there’s no way for an advisor to help save on the cost of high-volume transaction. In contrast, during Nally’s opening remarks, he noted that TD Ameritrade’s Block Trading Desk helped one advisor’s client save $1.6 million on a $300 million ETF transaction.