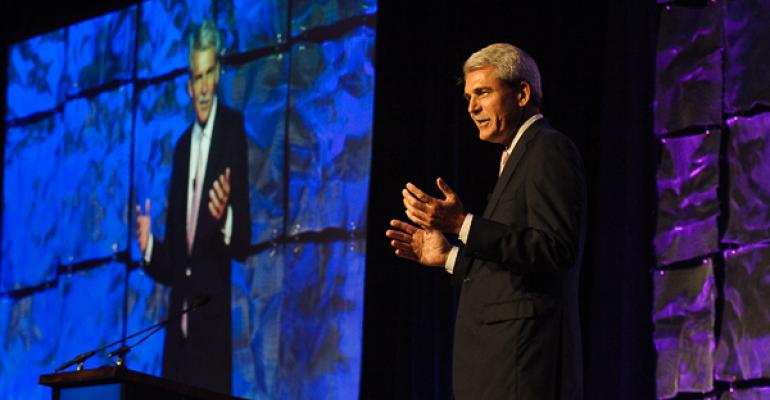 At Raymond James annual Women’s Symposium last week, women advisors met to share ideas and stories on how to succeed in the business today, touching on themes like the need to build confidence, help each other be successful, lean in and raise their hands.

More than 500 attendees, including over 300 advisors and 23 prospective advisors, convened in St. Petersburg, Florida for the 21st Annual Women’s Symposium – hosted by the Raymond James Network for Women Advisors and its director, Michelle Lynch.

Lynch welcomed attendees and emphasized two primary goals for the Women’s Network: first, to support and retain the firm’s existing advisors and help them grow their businesses and, second, to bring even more women to the firm through recruiting experienced advisors, training new advisors and encouraging career changers to consider Financial Advisor as an option.

A recent study suggests for every eight advisors leaving the industry, primarily due to retirement, there are only three ready to replace them, Lynch told attendees. That statistic applies to both men and women, so Raymond James is committed to expanding the talent pool but in particular women and minorities. The Network will be focusing on targeting female teachers, attorneys, former military and those re-entering the workforce after raising families – all of whom are known to have many of the skills needed to be successful advisors.

Raymond James also plans to increase the number of women in its Advisor Mastery Program (AMP) and is continuing with the Registered Associate Mentoring Program (RAMP) which trains and encourages registered sales associates to explore careers as financial advisors. Approximately 30 percent of the firm’s existing women advisors began their careers as sales assistants. Lynch also thanked the audience for responding to CEO Paul Reilly’s challenge of a year ago to get involved in their communities and give back, while encouraging them to even increase that involvement and to consider targeting young people in particular, with financial literacy as a goal, citing the success stories of rock group Gooding as an example.

CEO Paul Reilly also spoke at the event, discussing his desire to further diversify the advisor population, particularly with more women. He encouraged the audience to not take “no” for an answer, but instead, to push senior management to deliver. He talked about the “client of the future,” who is predicted to be a woman and how the firm is investing to meet the challenge of both delivering the needed products and services to that client as well as communicating with her in the manner she expects.

Co-author of the book The Confidence Code, Katty Kay, discussed the gap in confidence most women experience when compared to men. Confidence, she noted, can come from doing things that are difficult, by going outside one’s comfort zone and taking some risks, even failing, thereby building up one’s confidence. Confidence is the stuff that turns thoughts into action. Thoughts without action are worth nothing.

She noted women “ruminate” too much, over-think actions and dwell on negatives—and social media has skewed and created a volatile form of confidence… likes, shares and compliments are not the same as overcoming hurdles. Bottom line: women must bring their self-perception in line with actual competencies and stop trying to be perfectionists.

Several advisors, including Julie Leichtnam and Lynne Burgraff, took the stage to share the secrets of their success. Leichtnam and Burgraff, who are with Sweet Financial in Fairmont, Minn., described how they created a group called “Smarter Women” to increase the number of women clients and prospects.

Their multi-pronged approach includes a website that tells real life stories and invites visitors to become members of the group; a regular email with tips on business matters. They also host a series of monthly educational workshops or social gatherings covering topics such as investing, health issues or community topics, as well as one big annual event called, Wardrobe, Wealth & Wine, which benefits a non-profit and is open to all women clients, Smarter Women members and the community at large.