brought to you by
News>Industry

One common move among investors is to buy the worst performing asset class, sector or fund of the past year, with the idea that markets go in cycles and what has fallen so low will have plenty of room to rise. It may be common, but it’s a mistake. One year is too short a period for any sort of mean reversion to take effect, said The Leuthold Group, in its January research report.

Rather, Leuthold finds that investing in the second-best performing asset class or sector—the bridesmaid, so to speak—of the previous year is the optimal price-based strategy, and it has been over the last 40 years.

Taking this approach, investors should buy the MSCI EAFE in 2013, which returned 17.9 percent in 2012, just behind the NAREIT Index’s 20.1 percent. Looking at the sectors of the S&P, it is consumer discretionary stocks that should be headed to the altar this year, with a runner-up total return of 24.1 percent in 2012 just behind the 28.8 percent returned by 2012’s darling, financial stocks. 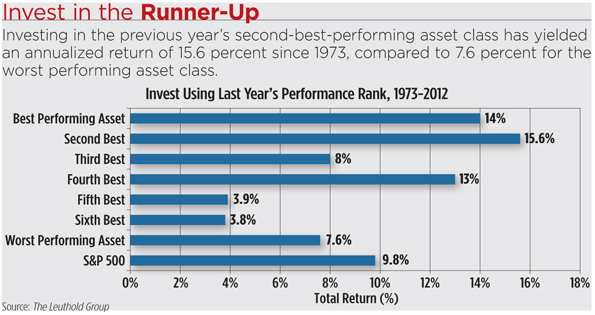