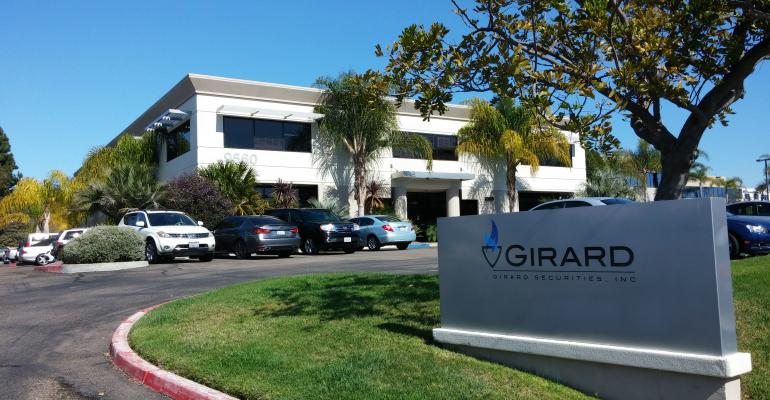 Girard is the latest firm to deregister its broker/dealer and join a larger firm as an OSJ, shedding regulatory and operational burdens. The DOL rule was the tipping point. "I don't know how in the world we could have done it as a small firm."

Cetera member firm Girard Securities, with 200 advisors and $7.7 billion in client assets, will deregister itself as a broker/dealer and join b/d Cetera Advisor Networks as a super OSJ—an office of supervisory jurisdiction. It's the latest in a string of similar moves being made by smaller IBDs who are challenged with increasing regulatory costs and burdened with lagging technology or advisor-support programs. Girard was already owned by Cetera's corporate parent, but until now was operationally independent.

“Over the course of the past three years, we’ve realized that, for a variety of reasons, we needed to accelerate access our advisors have to the suite of Cetera’s technology platform, among other things,” said Susie Tietjen, CEO of Girard Securities.

In May, Security Bank of Kansas made a similar move, joining INVEST Financial Corporation. In June, HBW Partners dissolved its b/d to form an OSJ with Cetera Advisor Networks.

Girard was acquired by RCS Capital—the former parent company of Cetera built by Nick Schorsch—nearly three years ago. Since then, other independent b/d's also bought by Schorsch, VSR, J.P. Turner and Investors Capital, have made similar moves to what Girard is doing now.

“I’ve been surprised that Girard’s been kept separate this long, when larger firms like J.P. Turner and VSR and Investors Capital have already been folded into the other Cetera b/d's,” said Jonathan Henschen, president of the recruiting firm Henschen & Associates in Marine on St. Croix, Minnesota. “The trend for the smaller b/d's is to be a super OSJ where they can use the b/d for the things they don’t have the scale for, and then bringing some additional value-added services, such as direct-marketing help for the reps in the group, things like that, to help set them apart from the crowd.”

For Girard, the compliance burden associated with the Department of Labor’s fiduciary rule was the nail in the coffin.

“I don’t know how in the world we could’ve done it as a small firm, and I, quite frankly, don’t know how others are doing it, which just reinforces why being part of a larger organization is so critical today,” Tietjen said. “If my team is constantly in the weeds on some kind of regulatory project, that takes us away from servicing and supporting our advisors."

The Girard management team will stay intact; Tietjen will serve as regional director of the OSJ, and the firm will continue to operate out of San Diego, California. Although Girard was dual clearing—through Pershing and National Financial—all their accounts will move to Pershing, although the switch won’t require client signatures or repapering, according to Tom Taylor, president of Cetera Advisor Networks.

The firm’s advisors will immediately have access to Cetera’s new advisor workstation, a big reason Tietjen made the decision to come over. Cetera Advisor Networks is typically one of the first to roll out new technology. The new tech stack includes My Advice Architect, a wealth management platform to help advisors match clients with investment products, and Decipher, its emotional-analysis software.

“I saw an opportunity to jump to the front of the line, if you will, by joining as a region of networks versus continuing as one of the traditional channel firms and getting the access to the resources once the other firms had access to the resources,” Tietjen said. “Quite frankly, given the feedback I’ve been getting from my advisors, they’re very hungry for an overall improved experience. And by joining Networks, I can deliver that to them right away.”

But there can be downsides to being the first in line in a tech rollout.

“The flipside to that is, you get something newly rolled out and they haven’t worked out the technical bugs on it,” Henschen said. “I’ve seen plenty of poor new-technology rollouts that upset a bunch of people, and reps left over it.”

Girard was acquired by RCS Capital—the former parent company of Cetera built by Nick Schorsch—nearly three years ago. Since then, sister firms VSR, J.P. Turner and Investors Capital have been rolled up into Cetera’s other b/d's.