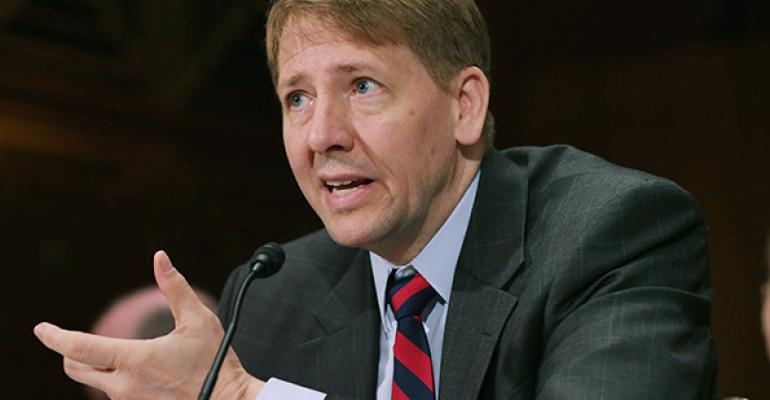 Fate of Elizabeth Warren's CFPB to Be Decided by Legal Showdown

An appeals court will hear arguments regarding the Consumer Financial Protection Bureau and its chief Richard Cordray on Wednesday.

(Bloomberg) --Since the day it was created, Democrats loved it, Republicans hated it and Wall Street, at best, tolerated it.

The fate of the Consumer Financial Protection Bureau and its chief, Richard Cordray, is in the hands of a Washington appeals court that will hear arguments Wednesday. The CFPB asked the court to reconsider its 2016 decision involving the agency’s punishment of New Jersey mortgage company PHH Corp. The outcome could take months. It’s expected to provide ammunition for one side or the other in the years-long tug of war over the agency’s existence.

Democrats defend the CFPB, the brainchild of Massachusetts Senator Elizabeth Warren, as a Wall Street watchdog necessary to advocate for ordinary Americans in the aftermath of the worst economic downturn in 75 years. They say it’s returned nearly $12 billion to customers who’ve been shortchanged.

Republicans condemn the CFPB for snuffing economic activity by burdening lenders with red tape, and they’ve intensified their attacks since the election of President Donald Trump. They say that Cordray’s power is unconstitutional -- he can be fired only by the president and only for cause -- and the agency oversteps its mandate. Last year, the appeals court agreed, while at the same time rejecting calls to dismantle the agency.

“The CFPB has the weaker hand right now,’’ said Adam White, who studies financial regulation and law at the Hoover Institution, a conservative think tank. “If they lose any aspect of this case, Cordray is really in trouble. And no matter what, this case will continue to energize Congress.’’

The judges could go so far as to call on the CFPB to be disbanded. The Trump administration has said that it wants the ability to dismiss Cordray at any time for any reason, but that the agency shouldn’t be shut down entirely.

The CFPB has been at the center of some of the ugliest partisan bickering in Congress over the 2010 Dodd-Frank banking law. The Trump administration’s budget, announced today, calls for moving oversight of the CFPB to Congress from the Federal Reserve, which would save the federal government $6.8 billion over a decade.

The banking industry says it would prefer a bipartisan commission rather than a single director. In congressional hearings over the years, Republicans called Cordray a dictator and a “sad, sick joke.”

GOP lawmakers have also accused the agency of racial discrimination, misusing funds and withholding information from Congress. In 2014, the House Financial Services Committee, led by Texas Republican Jeb Hensarling, launched an investigation into the renovation of the agency’s Washington headquarters, accusing the CFPB of spending too much on lavish furnishings like a two-story waterfall and a sunken garden.

“It’s not like Cordray took over an agency that had deep-rooted problems. He created this mess,’’ said Representative Sean Duffy, a Wisconsin Republican. “Waste, racism, sexism. These are the kinds of problems that are rampant at the CFPB.’’

Democrats frequently praise Cordray for developing a newborn agency into an aggressive watchdog with a successful track record of shielding consumers from corporate abuse. Lawmakers express pride in its crackdown of Wells Fargo & Co. last year over the bank’s phony-account scandal.

The CFPB is so popular among Democrats that liberal advocacy groups across the country are coaching voters to call their congress members to complain about Republican efforts to kill it.

“Is Representative Mary interested in causing another financial crisis and recession?” reads the script one grassroots group, Indivisible, is handing out to voters. “Because that’s what will happen if he/she sides with Wall Street and predatory lenders instead of with his/her constituents,” the script says.

Many bank lobbyists and Capitol Hill staffers expected Trump to fire Cordray months ago. The CFPB has become so politically charged that even the president has acknowledged the risks. At a March closed-door meeting at the White House, Trump told a group of bankers that if he fired Cordray or kneecapped the agency, it would probably spark a backlash, people familiar with the matter said.

As for Cordray, the CFPB director appears aware of the agency’s existential crisis, but has proceeded as if it’s business as usual. In a private meeting earlier this month, a bipartisan group of lawmakers on the House Appropriations Committee asked Cordray for an update on the status of the embattled agency, according to people familiar with the matter. Cordray insisted the upcoming court decision would settle many unanswered questions about the CFPB’s future, and expressed confidence the CFPB would prevail, the people said.

Despite Cordray’s optimism, congressional Republicans have tried to clip Cordray’s wings by threatening to overturn rules he approves. That could let banks off the hook on policies they dislike, such as a rule that would make it easier for consumers to sue their banks.

“There has already been quite a bit of neutering of the agency,’’ said Richard Hunt, a bank lobbyist and head of the Consumer Bankers Association.

But even if Trump decides to let Cordray serve out his term, which ends in July 2018, Republicans will likely get a chance to name his replacement and shape how the agency works.

“It’s a win for Republicans either way,’’ said Norbert Michel, a financial regulation fellow at the conservative Heritage Foundation. “No matter what, Richard Cordray is a lame duck.’’