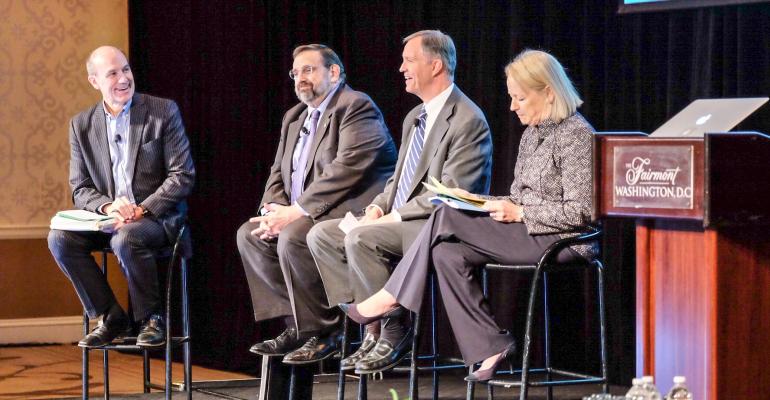 A trio of former Securities and Exchange Commission chairs say that the agency needs to move forward immediately on a uniform fiduciary standard for financial advisors that regulates based on job functions, rather than what job title professionals hold.

“I feel very strongly that SEC needs to move forward and move forward now. The Department of Labor is doing what it feels it needs to do, and they’re not wrong, but SEC needs to get going on this,” Mary Schapiro, SEC chair from 2009 to 2012, said during TD Ameritrade’s Advocacy Leaders Summit in Washington D.C. on Tuesday.

She added that it’s possible the SEC could finalize its rule before the Labor Department’s current fiduciary proposal is implemented but that any final rule on fiduciary coming out of the SEC will be a split vote. “We need to accept that important things will get done on 3-2 votes,” Schapiro says.

But when the SEC does release its uniform fiduciary proposal, it should focus on requiring a fiduciary reasonability based an advisor's job functions, rather than applying the responsibility based on whether a professional is registered as a broker or an investment advisor. “Form should follow function,” said Christopher Cox, who chaired the SEC from 2005 to 2009.

"It’s about what customers of securities professionals legitimately have a right to expect," says Harvey Pitt, who served as SEC Chair from 2001 to 2003. “The [fiduciary] standard should be about putting the customer first,” Pitt added.

“Using the name financial advisor is fine because that’s what I think people expect, but then there’s no ground to complain to be held to the same standard as an investment advisor,” Pitt says. “It doesn’t matter what you’re called, it matters what you do.”

The current regulatory framework has given rise to advisors wearing different “hats”—switching between a suitability and fiduciary responsibility—depending on the job function being performed. But that’s clearly not enough, the former chairs say. To change that, a future uniform fiduciary standard developed by the SEC needs to focus on a principles-based approach that outlines what is expected, rather than a prescriptive rule bogged down in the details, like the Department of Labor’s current fiduciary proposal, Pitt says.

“Tell people what they should aim for. What happens when you get so detailed, lawyers figure out how they can craft rules around it,” Pitt says. “I just don’t think the government helps itself or the people it’s regulating by writing rules with such detail that then people are encouraged to search for loopholes.”

Yet Schapiro notes that she doesn’t think that the Labor Department should hold its rulemaking until the SEC to moves. “The DOL needs to do what it needs to do—they need to get their rule finalized and implemented,” she says. “I don’t think that impacts one way or another the SEC”s timetable.”