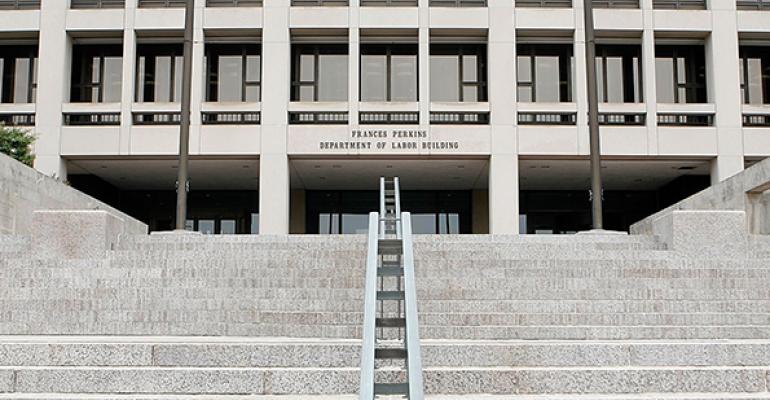 Under the temporary policy, enforcement actions will not be taken if the applicability date of April 10 arrives before a delay.

In a field assistance bulletin posted Friday night, the Department of Labor announced a temporary enforcement policy meant to avoid confusion over a proposal to delay its fiduciary rule.

On March 2, the DOL proposed a rule that would delay the fiduciary rule implementation date (April 10) by 60 days. That will give the agency time to collect and consider information related to issues raised in President Donald Trump’s memorandum on the rule. The public has until March 17 to comment on the proposal, and, if passed, the 60 day-delay would begin on the publication date of a final rule.

But April 10 is fast-approaching, and it’s unknown whether that the department will finalize the delay by then.

“Although the Department intends to issue a decision on the March 2 proposal in advance of the April 10 applicability date, financial services institutions have expressed concern about investor confusion and other marketplace disruption based on uncertainty about whether a final rule implementing any delay will be published before April 10, whether there may be a ‘gap’ period during which the fiduciary duty rule becomes applicable before a delay is published after April 10, or whether the Department may decide either before or after April 10 not to issue a delay based on its evaluation of the public comments,” writes John J. Canary
director of regulations and interpretations, in the bulletin.

In the first part of the temporary policy, the department says that even if April 10 comes around and a delay hasn’t been finalized, they will not pursue enforcement actions against advisors or financial institutions who fail to satisfy the conditions of the rule or prohibited transaction exemptions. If an advisor fails to provide a client with a disclosure document, for example, they won’t be subject to disciplinary action.

Secondly, if the DOL decides not to issue a delay and it is past April 10, the department will not pursue enforcement action for violations of the rule “within a reasonable period after the publication of a decision not to delay the April 10 applicability date.”

And if the department makes a decision on proposed delay and that causes more confusion, the agency will consider additional temporary relief, the bulletin said.

“It has been the Department’s longstanding commitment to provide compliance assistance to employers, plan sponsors, plan fiduciaries, employee benefit plan officials, and financial services and other service providers so that the fiduciary duty rule and exemptions are implemented in an efficient and effective manner.”