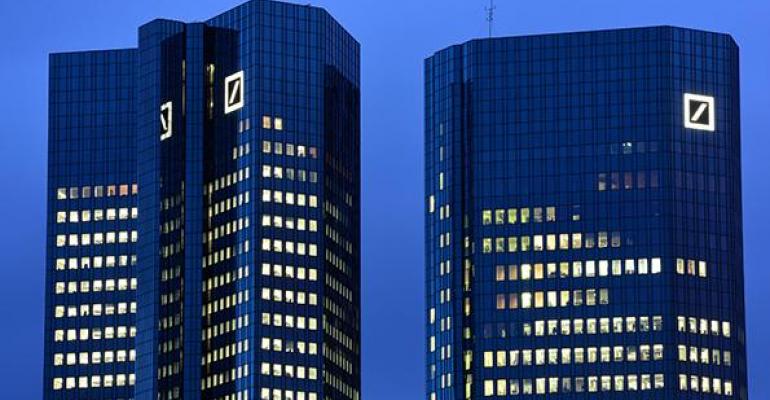 Despite Deutsche Bank Cuts, a Bright Future for Wealth Management

Deutsche Bank announced plans Thursday to cut 7,000 jobs across its equities sales and trading business to get its earnings back up. But CEO Christian Sewing said he had a positive outlook on the firm’s global wealth management business. That business currently has about $235 billion in assets under management and revenues of about $2 billion last year. “The market is growing as wealth increases and we have the excellence to participate in that,” Sewing said. “In many countries, we’ll hire new advisers in a focused manner—while cutting back in other areas, for example through the integration of our private bank in Cologne, Sal. Oppenheim.” The firm’s wealth management business is part of its Private & Commercial Bank.

Millennials Are More Prepared for Retirement Than Boomers Millennials are more ready to retire than their baby boomer parents, according to the J.D. Power 2018 Group Retirement Satisfaction Study. The study, which surveyed 9,500 group retirement plan members, found that relative to age, millennials are most likely of all demographic groups to have set specific retirement goals and have the highest amount of savings. Fifty-one percent of millennials have set specific retirement goals, compared to 44 percent of both Generation X and baby boomers. As far as savings go, the study found that 61 percent of millennials have at least $25,000 in total retirement savings, with 27 percent having more than $100,000, with an average of 30 to 35 years before retirement. Seventy-five percent of boomers surveyed had more than $100,000 in savings with an average of three years until retirement age. The average boomer will hit retirement (aged 65) with just 3.4 years of current income saved, well below the 10 years recommended by experts.

Here’s a New Way to “Relate” to Clients On-the-go advisors have a new mobile-friendly and compliant way to engage with their clients via text or voice, announced Hearsay Systems at their company summit. The new tool, called Hearsay Relate, allows advisors to make calls and compliantly send texts to clients from a dedicated business number. The tool also includes features like text-on-behalf, predictive one-touch Quick Replies and the ability to preschedule texts for annual meetings, billing and other upcoming events. On the enterprise side, the tool can integrate with CRM systems and even “[block] high-risk texts before they’re sent.” “By having multiple ways to connect with clients, whether from the office or while on the road, advisors are able to increase client touchpoints, provide better service and, ultimately, move business forward faster,” said Gaurav Agarwal, the company’s vice president of product.