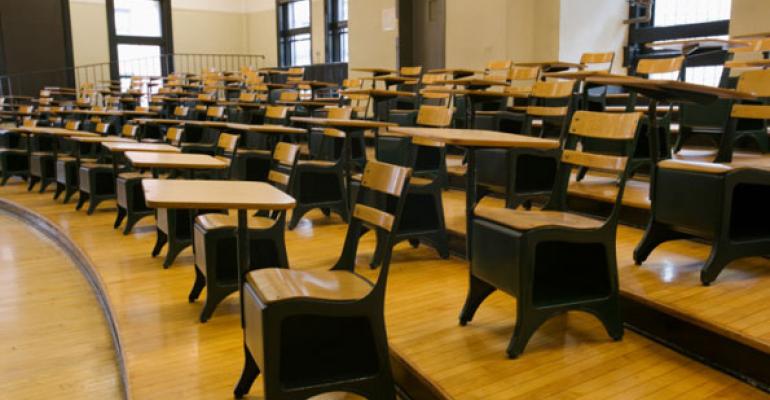 Mediocre recruitment strategies have left a disconnect between future talent and the industry itself.

The 2017 Financial Planning Program Directors Survey found that although 90 percent of schools surveyed expect enrollment to grow in the next five years, “RIAs are largely invisible on campus, which is keeping them from hiring top talent.” Many of these program directors believe the solution to “the pending talent shortage” requires widespread awareness efforts aimed at bringing more students, particularly women and minorities, into the industry.

Administrators and program directors believe this sparsity of women and minorities “is because these groups are less likely to believe the profession is a viable career option.”

"To change the face of the next generation of planners, RIAs need to start a dialogue," said Kate Healy, managing director, Generation Next, TD Ameritrade Institutional. "I'm convinced that the more students hear from advisors they can relate to, and learn more about the career opportunities offered by independent RIA firms, the more they'll be attracted to the profession."

The survey found that despite their lower rates of enrollment in financial planning programs, women and minorities who do enroll are in high demand in the job market, with “job offers upon college graduation at slightly higher rates than the overall population of financial planning graduates.”

"The war for talent starts at the undergraduate level. To win, RIAs need to get out in front of the next generation on campus and make themselves seen," Healy said. "If RIAs aren't having conversations about the benefits of their chosen career path, the competition most certainly will."

Though salary takes a clear precedence, Healy and other experts believe other priorities are often overlooked by RIAs and recruiters alike. The survey found that “the number one reason women and minorities study financial planning is to help others reach financial goals. … Program directors [also] reported that work/life balance is also very important to women, and minorities are drawn to the appeal of starting and owning a business someday.”

Financial planning as a degree is also a fairly new concept, and with the average program being only 10 years old, the lack of awareness and popularity make sense. Though business degrees run rampant, and 80 percent of financial planning programs surveyed are housed in a business school, more than half of the students in financial planning programs come in as juniors or seniors, largely switching out of finance, accounting or economics majors. Moreover, only 54 percent of the programs surveyed have an on-campus student chapter of a trade organization, such as the Financial Planning Association.

In order to solve this issue, experts recommend that firms and individuals “hire more interns [and] participate in on-campus career days and become guest lecturers, or even adjunct professors.”