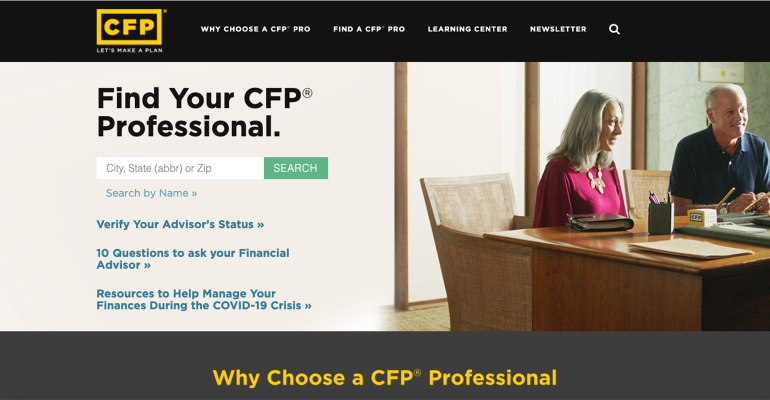 After receiving backlash from the fee-only community for removing the advisor compensation feature from its website, the CFP Board announced it was building a new one.

The advisor compensation search feature the CFP Board nixed from the Find Your CFP Professional search tool on its public-facing website, LetsMakeAPlan.org, is being replaced with a more consumer-friendly one, according to the CFP Board.

“We won’t be putting compensation back exactly as it was, previously, as it did not provide clear and helpful information to the public,” said Jack Brod, chair of the CFP Board’s board of directors, during a CFP Board Update at the National Association of Personal Financial Advisors virtual annual conference. The new search feature will be added as part of the website's full redesign, he said.

The previous search tool, which was altered in March, listed advisor compensation models as commission-only, commission and fee, and fee-only. The CFP Board determined that while the descriptors were broad enough to categorize the various payment styles of CFP holders, they were not clear to prospective clients.

CFP Board CEO Kevin Keller said the organization plans to substitute the three compensation categories it once listed with information that helps consumers better understand whether they will be able to afford an advisor’s services and how they can pay.

“There’s a not-too subtle difference there, but our Code and Standards requires a CFP professional to inform the client what they’re going to pay, how they’re going to pay, what remuneration their firm might get," Keller said. "And that’s why we’ve built into our 10 Questions to Ask Your Financial Advisors questions about compensation."

Keller was referring to the recommended list of questions for consumers the CFP Board put out to cushion the blow of removing the compensation information from advisors’ profiles.

Despite providing a stand-in, the CFP Board still ruffled feathers in March when it sent a letter to CFP professionals that it was updating the Let’s Make A Plan website and removing the ability for consumers to search for financial advisors according to their fee model.

Michael Kitces, head of planning strategy at Buckingham Strategic Wealth and co-founder of the XY Planning Network, an association for fee-only advisors who work with Gen X and millennial clients, took to Twitter to vocalize his shock of the CFP Board’s decision.

"The CFP Board is entirely removing any discussion of how advisors are compensated from its Let's Make A Plan website, and instead will force consumer to dig into advisor disclosures instead...," he tweeted.

Keller added that out of the hundreds of thousands website visitors who used the Find Your CFP search tool, only 7% searched for an advisor by compensation model.

NAPFA, who Keller said had members in leadership positions participate in early discussions concerning the website redesign in 2019, put out a statement that the alteration was a disservice to the public and that its website data shows consumer interest in the fee-only model.

“By making this change and removing that capability, the CFP Board is essentially saying that all compensation models are the same,” the letter read.

The first phase of the website redesign will be completed by the end of the year. However, the CFP Board isn’t sure whether the new search feature will surface in the first or second phase of the redesign.