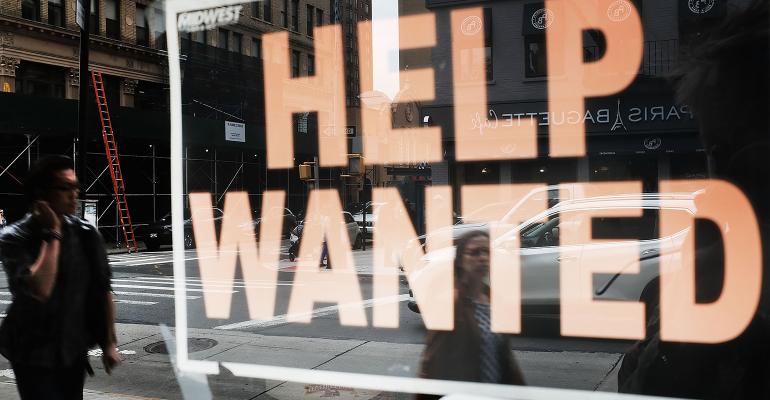 Fidelity, Schwab and TD Ameritrade are hiring call center reps and others to answer investor questions—but what does that mean for the RIAs that custody with them?

Fallout from the country’s frozen economy means more investors are looking for financial advice. A volatile stock market, the coronavirus relief bill’s impact on portfolios and brokerage accounts, and the loss of funds for those nearing or in retirement have triggered investors to reach out for professional help. And their demand has led to a hiring spree by discount brokerage firms that some say could take away service levels for those same firms' RIA custodian divisions.

Fidelity announced earlier this month that it was hiring close to 2,000 people as financial consultants, licensed reps and customer services representatives.

Across its 10 employment centers, Schwab has hired close to 250 new employees in the last two weeks of March. In Texas, where it has three employment centers alongside its new headquarters, there are 580 open positions across all business lines.

During a mid-April press briefing, Joe Vietri, Schwab’s branch network leader, said inbound calls to service centers, logins to mobile apps and usage of its online chat features were all up from the same time the year before.

“What should I be doing right now? Should I think about more conservative investments? Those are the conversations that we’re having day in and day out. That’s what the financial consultants in our branches are hearing,” said Vietri.

On Thursday, the firm announced that it is hiring 700 full-time client service trainees in Omaha, Neb.; Southlake, Texas; Chicago; and St. Louis. It plans to hire another 100 people for entry-level institutional positions in San Diego and Southlake.

“TD Ameritrade closed about 100 branches over the past year (not related to Covid-19) and I'd have to assume some of that hiring is to replace the workload of the retail clients out of those branches,” said Matt Elliott, the founder of Pulse Financial Planning in Rochester, Minn. Elliott was a branch manager for TD Ameritrade for almost two years before starting his own financial advisory and planning firm.

Less clear is whether the custodians are hiring new employees to service the RIA custodial services for independent advisors. Regardless, the new wave of employees could drain some energy from the custodial side of the business, or put inexperienced employees at the front lines of call centers for advisors.

“Whenever the retail units of custodians are under pressure, that inevitably leads to declining service and issues for advisors as these retail custodians use shared resources,” said Tim Welsh, the president of Nexus Strategy, a consulting firm for independent advisors.

Newer reps and inexperienced employees are bound to create more chaos, he added, as many lack understanding of the complex needs of advisor’s high-net-worth clients. The learning curves could mean certain services to independent advisors will fall through the cracks.

“I don't see the hiring wave improving service for RIAs. TD Ameritrade maintains a very clear distinction between their retail (branch) and institutional (RIA) clients. If the hiring is intended to alleviate some of the branch network pressure—those hires will be focused on helping retail clients and not RIAs on the institutional side of the business,” Elliott also said.

Advisor Christopher Struckhoff, who is the founder of Lionheart Capital Management in Irvine, Calif., said TDA has a great customer service for RIAs, but he’s more concerned about the changes to come after the planned acquisition by Charles Schwab is finalized later this year.

“I’m more worried about a decline in service after Chuck owns them and the changes to TD’s Veo platform for RIAs,” he said.

"We don't see this as a risk that service to RIAs will fall through the cracks. To the contrary, the fact that the RIA custodians are hiring NEW staff to service the demands of their retail clients—rather than simply shifting staff away from the custody business to serve on the retail side—is an indicator that the platforms remain committed to both their retail business and their RIA custody business," said Michael Kitces, the co-founder of the XY Planning Network. "Ultimately, though, we look to our members for their feedback about the level of ongoing support they're receiving from their custodial relationships—and if service falters, it's certainly an issue we will raise. But it's not something we're seeing at all at this point in custodians' ongoing commitment to RIAs."