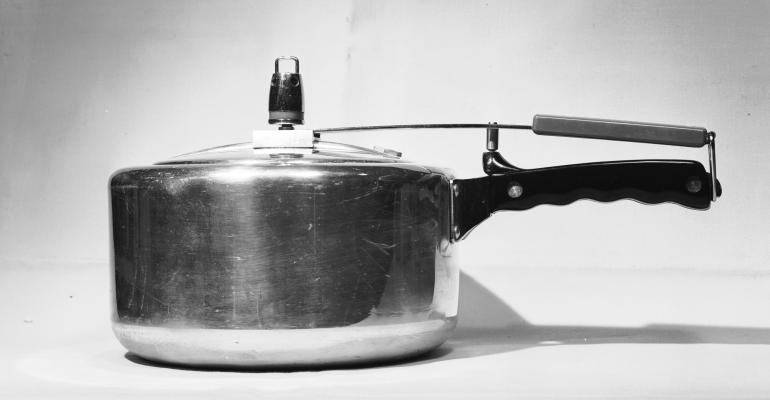 BlackRock and Fidelity Are Caught in a Pressure Cooker

Behemoth investment firms, from Fidelity to Vanguard to BlackRock, are locked in fierce competition to attract assets, even if that means dropping their fees closer to zero.

(Bloomberg Gadfly) --Pressure is rising for the biggest asset managers to significantly change the way they do business.

Behemoth investment firms, from Fidelity to Vanguard to BlackRock, are locked in fierce competition to attract assets, even if that means dropping their fees closer to zero. The result has been increasing strain, borne in large part by asset-management employees, who are being laid off or paid less.

Fidelity, for example, is offering buyouts to 3,000 longtime employees to reduce costs and give opportunities to younger staff members. BlackRock, meanwhile, cut employee bonuses for the first time since 2011, according to a Bloomberg News article on Wednesday by Sabrina Willmer.

These relatively small steps aren't going to be enough over the long run. The math will eventually stop working, especially if investors keep funneling cash to low-fee funds that rely on algorithms rather than human judgment.

But while more client money is nice, each dollar is becoming less lucrative for investment firms. Clients are gravitating toward funds almost entirely based on how expensive they are, with the highest-fee funds seeing steady withdrawals and the cheapest ones getting rewarded with assets.

And the move to less expensive passive funds is showing no signs of slowing. For example, investors poured $30.6 billion into passively managed U.S. equity funds in the first month of the year but yanked $20.8 billion from similar ones that were actively managed, according to Morningstar data.

At a certain point, this equation becomes unsustainable, especially if clients start withdrawing cash or a firm loses market share.

Investors want to pay less. That's not going to change. Asset managers need to rethink how they're going to continue being profitable while continuing to cut fees.

Some firms are already merging to create better economies of scale. Others are focusing more on higher-fee funds to manage private debt, equity and other less-liquid assets that can't be accessed through exchange-traded funds and other indexed strategies. These small moves by the biggest investment managers are just the beginning. The one thing about pressure is that it can crush or it can transform, but it rarely leaves anything the same.