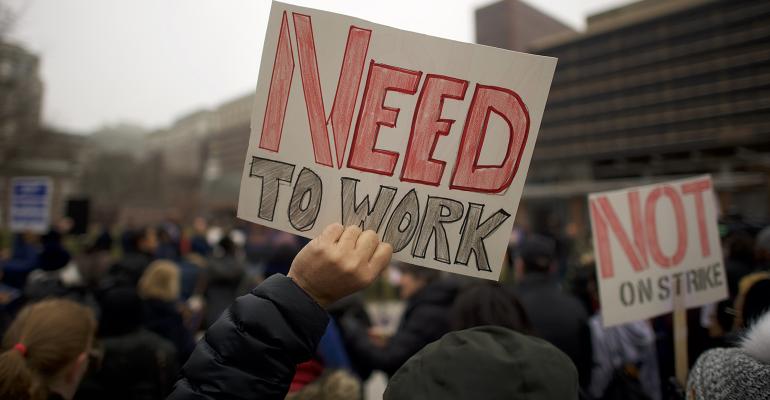 “While we’re just starting to offer consultations, the goal is to discuss ways employees are managing cash during this challenging time,” said Nick Holeman, CFP at Betterment for Business. “Government employees may come to us as they’re considering selling shares of stocks, withdrawing from retirement accounts, using credit cards or taking out loans. By offering conversations with our CFPs, we’re aiming to make these decisions easier for employees by providing guidance on the smartest withdrawal choice.”

A 2015 study of the 16-day U.S. government shutdown in 2013 found that many individuals used short-term liquidity options, like delaying recurring payments, to get through the gap in paychecks. As this shutdown drags into its second month, those alternatives may no longer be viable.

Commerce Secretary Wilbur Ross suggested government employees who aren’t being paid look at “borrowing from a bank or credit union” to cover costs, in an interview with CNBC. “There really is not a good excuse why there should be a liquidity crisis,” he added. “People might have to pay a little bit of interest, but the idea that it’s paycheck or zero is not a really valid idea.”

While government workers still need to deal with the practicalities of paying their bills, the Secretary's suggestion—that workers work without pay and take out loans that might include interest and fees—is “morally bankrupt,” said Micah Porter, president and CEO of Minerva Planning Group in Decatur, Ga. “If you’re not in the position to have reserves, it becomes a question of what’s the least expensive way to pay your bills,” he added. His firm works with a number of federal employees, many of whom work in areas that are not affected by the shutdown.

Besides the immediate effects of government employees missing pay, there’s a drag on the economy, said Porter. “The impacts of the shutdown are going to snowball,” he noted.

“It is dangerous to underestimate the impact to the current federal government shutdown,” added Dr. Steven Skancke, chief economic advisor at Keel Point, a wealth management company headquartered in Huntsville, Ala. Skancke previously served on the White House National Security Council staff and economic policy team and at the U.S. Treasury over multiple administrations.

“The real impact is much greater and can cause long-lasting damage and contribute to further slowing in an increasingly weakening global economic environment.” Dr. Skancke questioned whether the shutdown might even trigger the end of the current economic growth cycle, noting that a reduction in consumer spending across the 800,000 furloughed federal employees and 2 million furloughed contract employees is impacting U.S. GDP.

The government may also be facing an exodus of talent as a result of the shutdown. “We’d be foolish not to think that these people are now starting to consider a Plan B, which certainly means looking for alternative employers,” said Paul West, managing partner at Carson Wealth Management based in Omaha, Neb. “Anxiety is definitely building now.”

For its part, Betterment has categorized a government shutdown as an “emergency situation” that should be accounted for in the firm’s “safety net” funding bucket. As the shutdown continues, government employees might soon decide that they’d rather not deal with political emergencies, opting for a new employer instead.