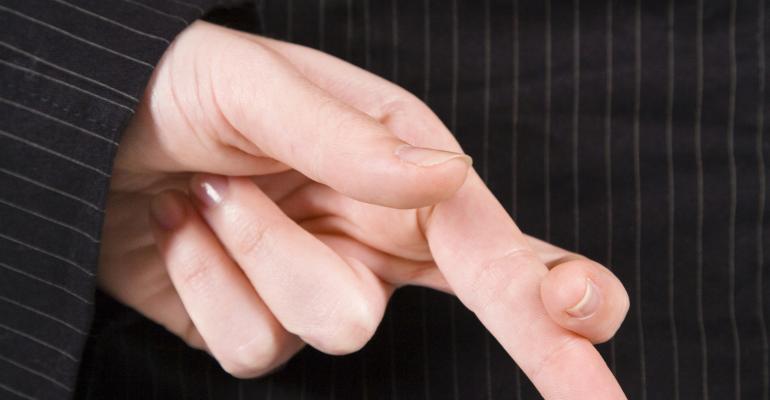 Are Your Clients Cheating on You? Probably

You may be in denial, but chances are, your clients are cheating on you. A recent report by Cerulli Associates found that 74 percent of investors own a direct investing account, but advisors believe it’s much less.

You may not believe it, or you may just be in denial. But chances are, your clients are cheating on you, according to a new report out by Cerulli Associates. According to their research, 74 percent of investors own a direct investing account—a personal discount brokerage account with no in-person advisor—but FAs believe that just 17 percent of their clients hold these accounts.

“I think that’s kind of a huge failing in the industry and represents the lack of comprehensive trust between clients and advisors at this point,” said Scott Smith, associate director at Cerulli.

Investors have lost trust in financial services institutions, in the wake of such scandals as Bernie Madoff and Jon Corzine’s MF Global, Smith said. And the reputations of the wirehouse firms haven’t held up well in the past five years. UBS was staying out of the headlines for a while, until the recent LIBOR scandal. Just today, UBS agreed to pay $1.5 billion to settle the charges, according to published reports.

“If you can find a week where one of the four wirehouses wasn’t fined more than $1 million, I’d be impressed,” Smith said.

Despite the mistrust clients may have, advisors take clients at their word when they tell them that they don’t have assets elsewhere, Smith said.

On average, retail investors reported that they maintain relationships with three providers, up from 2.7 in 2010 and 2011, Cerulli found. Those with even higher net worth—more than $5 million—have an average of 3.7 provider relationships.

The direct account ownership rate was highest at the independent broker/dealers, insurance firms, and private client channel, which serves higher-net-worth clients. These investors have more money at their discretion, and have so many accounts.

“In many cases, we have these investors acting as their own CIOs, outsourcing segments of their portfolio,” Smith said.

These higher-net-worth investors have enough assets to build a core portfolio that the advisor takes care of, while also having this side pocket money to play with, Smith said.

But the numbers are also a reflection of the continued popularity of online investment platforms, such as Schwab, TD Ameritrade and Fidelity. These days direct investing has become ubiquitous, with many investors preferring to do it online themselves, rather than take the time to go into an advisor’s office, Smith said.

The direct channel accounts for $3.68 trillion of the total $13.4 trillion U.S. wealth management pie, according to Cerulli. And in the last two years, the channel has enjoyed a compounded growth rate of 19 percent. Cerulli projects the direct market will reach $5 trillion by 2014.

“Would you prefer to talk to somebody on the phone, or would you want to go into a wood-paneled Morgan Stanley office and have two and a half hours out of your day to go do it?” Smith asked. “At this point, the visit to a traditional advisor’s office isn’t a bonus; it’s an onus.”