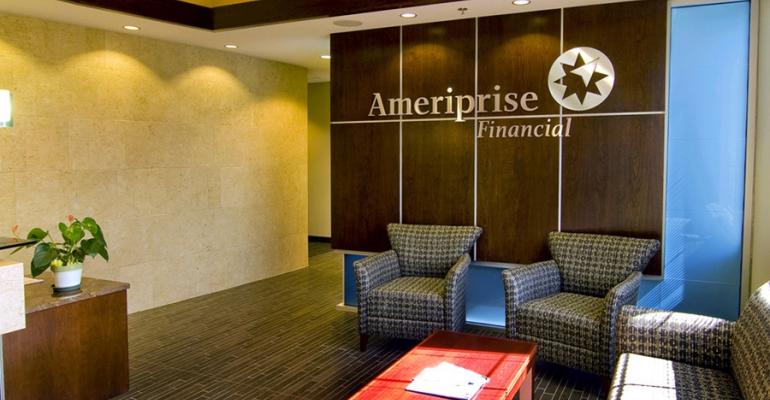 Ameriprise reported record client assets and wrap-account inflows, as well as improved advisor productivity, despite changes to 12b-1 fees in response to the DOL rule.

Ameriprise Financial’s advice and wealth business was the bright spot in its second-quarter earnings, despite the firm’s elimination of 12b-1 fees in advisory accounts earlier this year. The firm made the change to comply with the Department of Labor’s fiduciary rule.

The change resulted in a loss of $54 million in net revenue during the quarter. Yet total net income was up 17 percent year over year to $393 million, while net revenue increased 4.2 percent over a year ago to $2.99 billion, beating analysts’ expectations by $70 million, according to SeekingAlpha.com.

Advice and wealth management led that momentum, he said. The segment reported record client assets of $512 billion, which he attributed to attracting more clients in the $500,000 to $5 million range. The company’s fee-based investment-advisory platform attracted $4.5 billion in net inflows, a new high.

In addition to eliminating 12b-1 fees in advisory accounts, the firm has reduced the number of funds on its platform, due to the DOL rule. That will affect about 6 percent of the firm’s assets, which have already been mapped into certain types of funds, he added.

Leading up to the June 9 applicability date of the rule, the firm held a series of webcasts and more than 100 training sessions for advisors.

“We continue to provide clear direction and extensive training for our advisors so that they’re well supported and able to continue serving clients and building their practices during this time.”

While the firm recruited 81 experienced advisors during the quarter, the total headcount declined from 9,668 in the first quarter to 9,640 this quarter.

But the firm is bringing on larger advisors than in the past.

“Importantly, advisors joining us from wirehouses, regionals and independents are, on average, more than a third more productive than advisors recruited this time a year ago,” Cracchiolo said.

The average advisor’s trailing 12-month production increased 7 percent from a year ago, to $541,000.