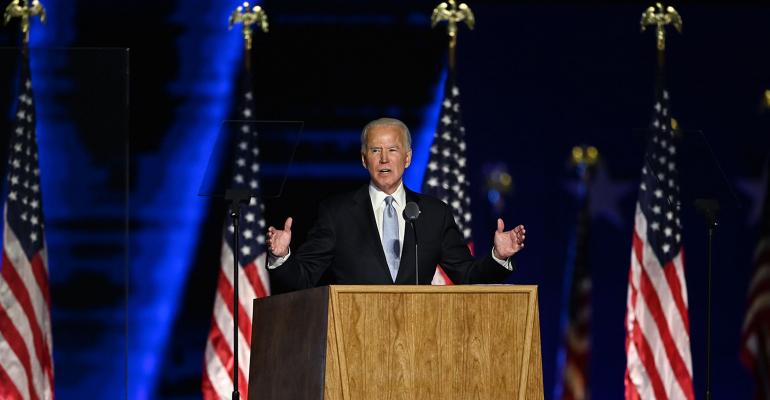 The SEC’s Reg BI and the DOL’s new fiduciary rule could both be revisited by a Democratic administration.

With the country in an uproar after Joe Biden was—finally—declared the winner in the most controversial presidential election in decades, advisors said they were concerned about the potential regulatory and tax implications from the new Democratic administration, even as they were less worried about the impact on financial markets.

On the regulatory front, many said the SEC’s Regulation Best Interest Rule and the Department of Labor’s fiduciary exemption are the two main items in the crosshairs.

Related: Wall Street Wants to Be Sure Biden Can Keep Warren’s Army at Bay

“If I had to guess, [Democrats] will take aim at [Reg BI], and it will be scrapped,” said Andrea McGrew, chief compliance, legal officer with USA Financial. “In the party platform, they said Reg BI didn’t go far enough, and it allows self-serving interests to rule the day. It’s a good indication they don’t love it.”

However, while she thinks Reg BI is the ultimate target, the DOL fiduciary rule represents lower hanging fruit.

Related: What Does Divided Government Mean for Advisor Regulations?

“I do see it being on different footing (than Reg BI), and they see it as well,” McGrew said. “It seems way more rushed, it was truncated significantly compared to other rules. This one is easier and would be the first step, and it’s focused on retirement assets. It would be easy to unwind and make it more extensive, and aggressive for those who feel it didn’t go far enough.”

“I would be surprised if [a new SEC Chair under Biden] said let’s scrap Reg BI. I think having lived through the issue, I’d guess a new chair would be reluctant,” Stadulis said. “That would drain so many staff, energy, resources to do that on Day One. Would the chairman take a look around the edges? Quite possibly. But I’m guessing against a wholesale reconsideration.”

“[The fiduciary exemption] has been proposed, comments have been received, and they’ll likely make changes on some feedback they’ve received,” Traxler said. “After all of that work’s done, I think it would be difficult for a Biden administration to prioritize going right after that rule."

To be sure, without an overwhelming Democratic majority in Congress, it’s unclear how much of regulatory change advisors will see.

James Lundy, a partner at Faegre Drinker, is more on the fence.

“I think on the priority ... there are going to be other things than a uniform fiduciary standard,” Lundy said. “Objectively, Reg BI does fill a gap and attempts to address that gap with how broker/dealers interact with clients. That said, it could be something over the course of a four-year term that Democrats would likely consider” changing if there was an opening to do so.

As for the markets, even with a divided Congress, advisors expect to prepare their clients for more stimulus spending and higher taxes.

“I wouldn't be surprised if the market rallies,” said Pamela Chen, chief investment officer and managing partner at Santa Monica, Calif.-based Pamela Chen. “Maybe not immediately, but we'll continue to sustain a rally going forward, because with the Democrats coming into office, they are looking to institute a very heavy or large stimulus plan. That will stimulate the economy and will generate more growth in spending by putting more cash in people's pockets and generating additional revenues.”

“We're expecting an immediate stimulus and a bailout of municipalities, which would help municipal bonds,” said Loreen Gilbert, CEO of WealthWise Financial Services in Irvine, Calif. “If we see Biden win, then it's a clean energy play, so away from traditional energy and a positive for solar, for electric cars, for anything in that space.”

“With Biden, I know he wants to raise corporate taxes and capital gains taxes, and I think that can have an impact. Financial advisors need to think about their overall portfolio strategy, and if there was a portfolio strategy that was dependent on managing taxes by dividends or tax harvesting, we need to think about maybe we shouldn’t be doing that,” said Khloe U. Karova, founder of Modern Capital Concepts. “If we see Biden elected, he’s saying he’s raising taxes. I’m going to tilt my portfolios more towards growth companies.”

As far as bonds, Biden is better for the bond market than Trump, she said.

“But it has nothing to do with government spending,” she said. “Biden is better because Trump keeps trying to interfere with the Federal Reserve, trying to bully it. Biden supports a fully independent Federal Reserve. That’s a key thing, and when I think we have a Federal Reserve that’s listened to, it cannot be negative, and I don’t think Biden would be worse for bond holders.”

“For trade, a bigger long-run threat to our investment portfolios is not coronavirus, it’s these trade wars and tariffs,” Karova said. “It’s not really fully appreciating the long-term impact of some of these trade agreements. We need to recognize China is quickly emerging as a global economic power. The way trade tariffs work it’s tit for tat, and we’ve been suffering from that."

The tax implications of a Democratic administration also weigh on advisors.

“If there is a Biden win, we’re all going to be really busy between now and the end of the year: it's a matter of looking at people's tax positions and potentially taking gains,” Gilbert said. “In that scenario too, you could have a sell-off from purely profit taking. You’re going to have a lot of estate planning meetings at the end of this year. If you have a more balanced Senate, you would still want to worry about income tax issues.”

For many advisors, a return to some stability, at least in terms of political rhetoric, would be refreshing for both markets and participants.

“Americans deserve to wake up every morning and not be looking for some sensational tweet or some headline that’s going to create confusion or animosity towards their fellow man,” said Doug Boneparth of Bone Fide Wealth in New York.