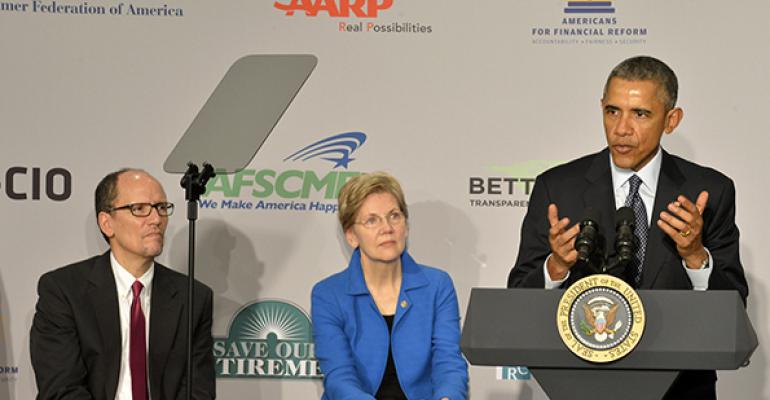 AARP&nbsp;carries great weight in Washington because of its massive war chest and membership

(Bloomberg) -- As the Obama administration reached the end of its nearly six-year battle with financial firms over setting tougher rules for brokers who handle retirement accounts, an emissary went up to Capitol Hill to smooth the way for the rollout.

AARP, in a meeting with Democratic congressional aides last month, stressed the policy’s importance to its millions of retiree members, according to people briefed on the gathering. The more significant message, however, was left unsaid: lawmakers besieged by industry pushback should keep in mind there was an equally powerful lobby on the other side.

AARP’s leading role in advocating for the Labor Department rule that makes brokers put clients’ interests ahead of their own was no accident. The administration, seeking to cement a legacy of being tough on Wall Street, spent months trading information and coordinating with the group as it campaigned for the plan, hundreds of pages of e-mails obtained from the department under public records law show.

The collaboration -- which opponents decried as overly cozy -- included AARP and Labor staff discussing guest lists for events, writing questions for an appearance in Miami by Labor Secretary Thomas Perez and strategizing on how to plant positive media articles. President Barack Obama himself announced the policy’s revival last year at AARP’s headquarters in Washington. And last week after the rule’s completion, he wrote the group a thank-you note.

The alliance helped resuscitate the regulation after many thought it was dead in 2011 due to vociferous lobbying by banks, brokerages and insurers. AARP’s muscle will also be important going forward, supporters say, as the industry tries to get Congress or the courts to reverse one of its biggest losses since the Dodd-Frank Act passed in 2010.

“The AARP is its own country,” said Knut Rostad, president of the Institute for the Fiduciary Standard, who has called for the stepped up protections for years.

The new rule, which brokers must fully adopt by January 2018, requires advisers to act in the best interests of their clients, an obligation known as fiduciary duty. Previously brokers could recommend investments that they believed were merely suitable.

“The Department of Labor welcomed feedback on how to address conflicts of interest in retirement advice through meetings, hearings, phone calls and written comments from a broad range of stakeholders, including consumer and retirement advocates, representatives from the financial services industry, and others,” he said.

AARP (formerly known as the American Association of Retired Persons) carries great weight in Washington because of its massive war chest and membership, a group of 38 million people over the age of 50 who tend to vote in great numbers. Non-partisan and non-profit, it has made financial issues a top priority and had been working in some capacity on getting the broker rule enacted since the late 1990s.

Cristina Martin Firvida, the group’s director of financial security, said that while AARP was able to provide something of a counterweight to the finance industry’s opposition, it still sees the fight more in David v. Goliath terms.

“Certainly our 38 million members are very, very important,” she said. “But there is no mistaking that the power of the lobbying on the other side of this issue is staggering.”

The Labor Department records, which cover the first six months in 2015 when the push to revive the rule kicked into high gear, provide a rare glimpse into how the Obama administration courts, and relies on, outside allies in tough policy fights.

Opponents included big banks like Morgan Stanley, major mutual fund companies like Fidelity Investments and independent brokers across the U.S. Many see the Labor-AARP partnership as a calculated move by the government to use the retirees’ group as its own de facto lobbyist. With the administration unable to persuade scores of congressional Democrats to support the rule, they say, it turned to AARP.

The result, the industry says, is that a rulemaking impacting millions of investors and $12 trillion in retirement savings was marred by politics. The message of beating back Wall Street, they add, quickly took precedence over a deliberative process that could have led to a less-flawed regulation. In particular, they say the policy could lead to lower-income clients being shunted aside because of the increased compliance costs.

“It is one thing to win a political race, it is another thing to make good policy,” said Kenneth Bentsen, president of the Securities Industry and Financial Markets Association which represents hundreds of brokerage firms, banks and asset managers. “In this instance, the politics don’t make it right.”

Bentsen said he was especially struck when Obama appeared at AARP’s offices in February 2015 to announce the rule’s revival.

The event left some wondering when a U.S. president last made a personal plea for an adjustment to the Employee Retirement Income Security Act of 1974. “That is just a sea change,” Bentsen said.

AARP wasn’t the only advocacy group that worked with the White House. Some, like the Consumer Federation of America, have fought for a fiduciary rule for years. Other backers included the AFL-CIO labor federation, Americans for Financial Reform and Better Markets.

Also significant, people involved say, was Perez, who made the rule’s enactment a priority when he became secretary in 2013. He personally briefed members of the House and Senate and called advocates before key developments, according to a copy of his daily appointment calendars for the first half of last year.

With the White House interested in showing its support for Main Street, as opposed to Wall Street, the fiduciary regulation got fresh attention toward the end of 2014. It had first been proposed in 2010 and then withdrawn by Labor the next year after industry lobbying sparked bipartisan complaints.

This time, the rule was given a make-over. First, the term “fiduciary” was de-emphasized. Instead, an easier-to-understand concept, brokers’ conflicts of interest, was highlighted. Driving the point home, the president’s Council of Economic Advisers claimed in a study that retirement savers lost up to $17 billion annually due to excessive commissions, high fees and other dubious practices.

A few weeks after the study was made public in January 2015, the White House reached out to AARP and other consumer groups to invite them to a “closed press and off the record” session with senior officials from the National Economic Council and Labor. The plan, an e-mail said, was to discuss “campaign efforts.”

The biggest of those came when Obama made his announcement. AARP and the Labor Department closely consulted about the 40 guests the association could invite, according to e-mails.

Working throughout the weekend before the Feb. 23 event, AARP lobbyists e-mailed with senior Labor staff members, trading spreadsheets that ranked guests in two tiers of priority. The first level included Richard Trumka, head of the AFL-CIO, Cornell Brooks, CEO of the NAACP and Lee Saunders, president of the American Federation of State, County and Municipal Employees.

“My preference with any seats that open up is to make sure we can add Hill staff,” wrote AARP’s Martin Firvida, adding that her “top priority” would be somebody from Democratic Senate Leader Harry Reid’s office, followed by an aide to Senator Charles Schumer of New York.

Obama’s appearance at AARP resembled a campaign rally. Appearing on a stage with Perez and Massachusetts Democratic Senator Elizabeth Warren, he fired up the crowd with references to financial advisers who “receive backdoor payments or hidden fees for steering people into bad retirement investments.”

Once the plan was released, AARP stayed in close touch with the Labor Department.

In late April of 2015, for example, Martin Firvida reached out to senior Labor Department officials to discuss a petition drive in support of the rule. The group had generated 26,000 signatures backing the plan and wanted Labor’s advice on how to maximize the visual impact of 52 reams of paper being dropped off at the agency by volunteers in AARP t-shirts.

“We will take your direction on what type and size box in which you would like those,’’ Martin Firvida wrote.

In an e-mailed statement, Martin Firvida said AARP has made “countless petition drops” on a variety of different issues and closely coordinates with the government because many federal “facilities have understandably enhanced security.”

Preparations were also extensive for a May 2015 conference in Miami, where Labor staff agreed to send Perez, hoping to “build grassroots support” for the initiative, according to one e-mail.

Ahead of the event, AARP senior adviser John Cummings wrote to Perez’s office that the crowd could be as large as 1,000 people, and to ensure attendance it would advertise the speech “as well as offer refreshments to entice.”

AARP and Labor traded draft press releases as the meeting approached, with the trade group’s representative also offering to send talking points to the agency.

An AARP official also suggested Yahoo Finance might be a good place to get news coverage. “We typically have pitched the producer/writer and she pitches her editors and then does the soft piece,” wrote Josh Rosenblum of AARP media relations on April 29 to a Perez spokeswoman.

Rosenblum, in an interview, explained that his reference to “soft” pieces was about stories that help educate consumers, as opposed to hard-hitting, investigative journalism.

As they prepped for an on-stage discussion between Perez and the AARP president in Miami, the two sides exchanged a four-page document of possible questions and answers. “How specifically are people being harmed under the current regulatory environment?” read one. “Some may say that financial professionals are already well regulated. Are they really?” read another.

“We are open to any and all suggestions and any questions your team may want to use instead,’’ AARP’s Cummings wrote to Labor.

Perez’s staff was also told in a memo from AARP dated April 29 that during an audience question and answer period, an executive from the group “would handle and deflect any questions that are not germane to the topics or are deemed inappropriate.”