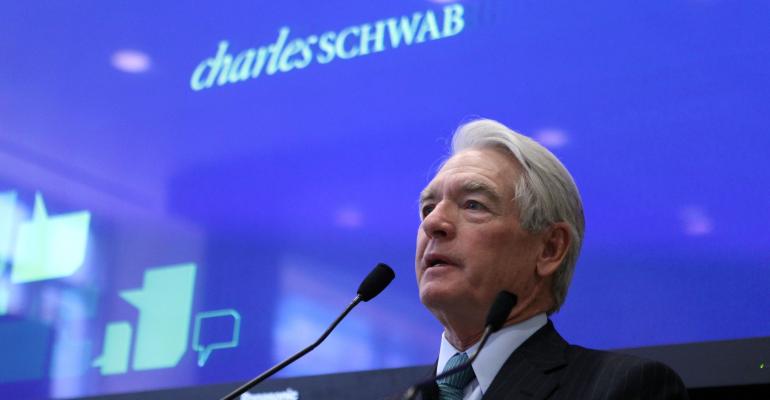 In a $0 Fee World, Charles Schwab Muscles Its Way to the Top

Charles Schwab Corp. had been considering eliminating fees as early as the 1990s.

Schwab considered eliminating charges in the 1990s after the advent of online trading, and again in the 2000s during the financial crisis, according to a person with knowledge of the matter. Each time, it dismissed the idea as too risky -- a danger to its own bottom line.

But with investing costs collapsing across Wall Street, the San Francisco-based firm finally took the leap in October -- and, in a matter of weeks, it drove a major rival into its arms.

On Monday, days after reports of a possible acquisition first surfaced, Schwab formally announced that it would acquire TD Ameritrade Holding Corp. in an all-stock deal valued at roughly $26 billion.

The deal caps a year of off-again-on-again negotiations and cements Schwab’s position in the industry it pioneered a half-century ago.

For TD Ameritrade, one of Schwab’s keenest rivals, the tie-up is an acknowledgment of a stark, new reality: One of finance’s most basic businesses, stock trading, has become so mundane that brokers are giving it away for free.

Schwab played its hand deftly. First, it sent shockwaves through its industry -- and sent TD Ameritrade stock into a tailspin -- by abruptly announcing last month that it would allow customers to trade stocks and exchange-traded funds for free. Then, it reentered talks that culminated in Monday’s announcement.

Chief Executive Officer Walt Bettinger was blunt in early November, telling Schwab clients that discount brokers were headed for a shakeout. But as recently as last week, the company’s Chief Financial Officer, Peter Crawford, was holding his cards close in discussions with industry executives.

“What a poker player,” Matt Witkos, head of global distribution at Eaton Vance Corp. in Boston, said of Crawford. “It was pretty shocking.”

Tradecraft aside, Schwab and TD Ameritrade are both responding to the tectonic shifts in their business. Price competition extends beyond commissions to investment products, too: Fidelity Investments is now charging nothing at all for a handful of its funds.

The race to zero, after so many years of resistance, partly reflects a generational shift. While many baby boomers are accustomed to paying fees, younger people have come to expect free trading from a new crop of competitors such as Robinhood Financial.

Schwab’s TD Ameritrade deal, expected to close in the second half of 2020, would create a formidable giant with $5 trillion in assets. The company would be so large that some analysts have said the deal might draw antitrust scrutiny.

Bettinger, the CEO, flicked away those concerns on a call with analysts Monday.

“We have numerous competitors, many of which are far larger than us today and far larger than a combined organization,” he said, naming Fidelity and Vanguard Group among the bigger challengers. “They’re going to continue to come right after us, as they are now in all aspects of the business.”

Toronto-Dominion Bank, which owns 43% of TD Ameritrade, initially reached out to Schwab, people familiar with the matter said.

Schwab’s eliminating of fees prompted TD Ameritrade and other rivals to follow suit. In the wake of the move, TD Bank again reached out to Schwab to restart the discussions, according to one of the people familiar with the matter.

The marriage of Schwab and its smaller Midwest rival left independent advisers and competitor firms scrambling to decode how the combined company will transform the brokerage business, which has already undergone considerable upheaval in recent years.

Schwab worked its way up the food chain by leaning into the “discount” part of the discount brokerage business, fueling more than a decade of expansion.

The firm got its start in the 1970s by undercutting Wall Street firms that would charge hundreds of dollars per order. It thrived on comparatively low-cost trading into the 1990s, moving online to compete with upstarts including E*Trade Financial Corp.

But Schwab lost its way in the early 2000s, charging more than competitors for trading and juggling disparate business lines. To reverse course, founder Charles Schwab returned to the helm and refocused on one thing: cheap fees. That decision to reconnect to the discount ethos helped it grow to its dominant position today.

“The logic of Schwab has been -- will always be -- to reduce commissions,” said Robert Burgelman, professor of management at the Stanford Graduate School of Business, who’s followed Schwab for two decades and written case studies on the company.

Schwab was able to kneecap its competitors last month with zero fees in part because it relies less on trading for income.

Its other business lines include adviser services and its own low-cost investment products. And the firm earns most of its revenue from reinvesting customer cash through its bank division. When falling interest rates threatened that income stream, Schwab announced in September that it was cutting 3% of its staff or about 600 jobs.

Monday’s announced deal puts additional heat on E*Trade, which was long thought to be a potential acquisition target for TD Ameritrade. After falling 9% on the day news of Schwab’s move broke, E*Trade’s shares rose more than 3% on Monday.

“Frankly, if I’m on the E*Trade board I’m certainly feeling a sense of urgency to find a buyer,” said Thomas Bradley, former president of TD Ameritrade.

An E*Trade spokesman didn’t respond to a request for comment outside normal business hours.

Some advisers were on edge about the tie-up. Those who use Schwab to safeguard assets wonder if they’ll be able to maintain the same level of service, especially for smaller clients.

“When they change course it can take time,” he said of the 20,000-person company. “But when they get on the desired course, they are financially strong enough and culturally motivated enough to roll over smaller contributors like TD Ameritrade.”

To contact the editors responsible for this story:
Sam Mamudi at [email protected]
David Gillen