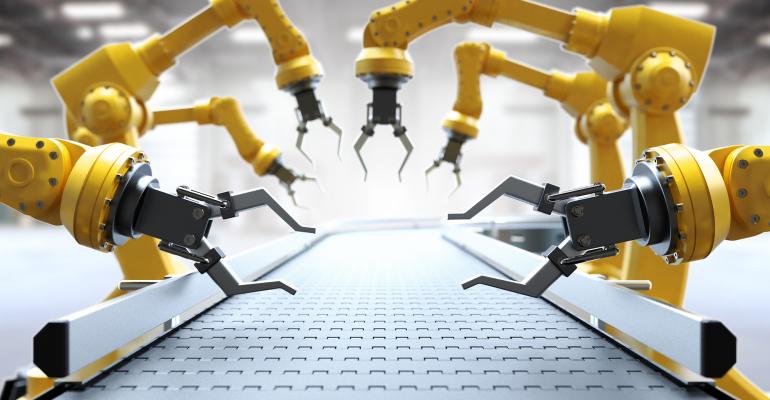 Will Automation in the Warehouse Sector Affect Real Estate Needs?

The use robots and driveless trucks will change the real estate requirements of logistics tenants, new reports claim.

Automated warehouses manned at least partially by robots are likely to become mainstream in the future, as warehouse tenants look for ways to overcome a growing labor shortage.

Online giant Amazon is already using robots made by Kiva—square-shaped, yellow machines—in multiple fulfillment centers. The 16-inch tall wheeled machines, which automate the picking and packing processes, cut merchandise cycle time down from 60-75 minutes to 15, and use space more efficiency, increasing inventory space by 50 percent, reports The Seattle Times. Amazon invested $775 million in the technology, but company executive Dave Clark stated that it reduced operating costs by 20 percent, which translates to $22 million per fulfillment center.

With e-commerce sales doubling over the last decade, labor costs have escalated rapidly due to strong competition for a limited number of workers. Transportation and warehouse jobs grew by 17 percent between 2013 and 2017, outpacing the national average by 12.8 percent, according to a new report from CBRE’s research and labor analytics group. The report predicts that an additional 452,000 workers are needed to accommodate continued e-commerce expansion in 2018 and 2019.

As a result, warehouse wages have risen dramatically since 2013 and now average $13.75 per hour nationally, but can range from $12.41 to $16.48 per hour, depending on the market. Warehouse labor represents 15 to 25 percent of logistics costs, compared to 3 to 6 percent when it comes to the cost of real estate. In high-density urban locations, labor accounts for up to 75 percent of costs.

Markets with the greatest growth in warehouse and transportation employment over the last decade include Charlotte, N.C. (56.8 percent); the Inland Empire (46.8 percent); Central California Valley (45.7 percent); Reno, Nev. (44.4 percent) and New Jersey (39.3 percent). But some of these markets, including Charlotte and the Inland Empire, have an increasing labor force due to significant population growth.

“Pressure on tenants might come more quickly than we ever imagined,” says David Egan, CBRE global head of industrial and logistics research and co-author of the report, suggesting that warehouse users will need to employ a combination of strategies to overcome the large labor shortfall, including automation.

Automation will change the economics of real estate in the logistics sector, according to a new report from global industrial real estate owner Prologis. It will provide supply chain savings in the medium and long term, but also open up infill locations that may not have been viable options previously due to higher rents and wages in urban facilities compared to peripheral locations. It will also shift the nature of human work in logistics facilities, requiring workers with a higher skill level, the report predicts.

Technology may also reduce transportation costs, which currently account for 45 to 70 percent of logistics costs, as alternative fuels and autonomous vehicles come into use, initially for delivery of goods to consumers from last mile locations.

"Supply chain efficiencies from technological developments and changing network configurations will create savings and margin that can flow to retailers, brands, consumers and logistics real estate,” state researchers at Prologis, noting that each 1 percent of savings in transportation and labor costs equates to 15 to 20 percent in logistics real estate rent.

While technology is not likely to reduce demand for industrial space, the report warns that rapid technological changes and accompanying structural supply chain shifts could accelerate obsolescence in certain product categories or create new patterns of obsolescence. A clearer definition of asset quality will emerge due to the higher level of building infrastructure required for advanced automation and robotics applications, say the researchers.

“Warehouse occupiers are making decisions through the lens of labor more than ever before,” says Kristin Sexton, senior managing director of CBRE’s labor analytics group and co-author of its report, noting that investors and developers are also focused on the labor factor.

“They’re getting questions from occupiers about labor supply near projects, or facilities are failing to lease because they’re not well positioned for labor,” she says, adding that developers are looking at local and regional labor dynamics when evaluating warehouse sites.

Ideally, logistics space users should focus on markets with a good balance of labor and affordability, Egan says. But since the most lucrative e-commerce markets do not necessarily offer that mix, Sexton implores both users and developers to think outside the box and focus on defining the logistics envelop within a reasonable reach of major markets.

“A logistics envelop may be as wide as a day’s drive time from a particular point,” she says, noting that as a point of reference, that could reach from Dallas as far west as Albuquerque, N.M. east to Nashville, Tenn. or north to Kansas City. This would provide a lot of options to work with in areas along transportation corridors, Sexton says.

When choosing a more rural location and hoping to draw labor from metro outskirts, “It’s important to consider any competition that might be closer to where the labor resides within the metro and its impact on attracting labor to a rural site,” she says.