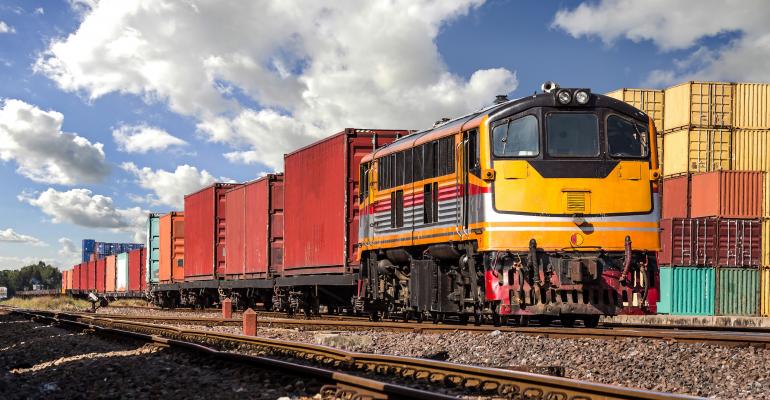 A growing truck driver shortage, along with improved efficiency of U.S. rail operations, has more shippers considering rail transportation as a viable alternative to long-haul trucking.  As a result, some developers are placing new industrial development projects adjacent to rail access sites.

Industrial developers and investors are considering the advantages of rail access when choosing locations for new projects, says Tray Anderson, who heads the logistics and industrial services platform in the Americas for real estate services firm Cushman & Wakefield. While rail access doesn't drive location decisions, it has become a risk mitigation strategy, offering an alternative to trucking if the driver shortage escalates.

Rail’s efficiency, safety, cost savings and superior delivery windows are widely recognized, says Reagan Shanley, executive vice president of industrial development at Denver-based The Broe Group and its affiliate OmniTRAX, a railroad developer/operator that connects businesses to class I railroads nationally. A 2018 American Trucking Association’s study found that moving products by rail was 45 percent less expensive per ton than shipping by trucks. The exceptions, according to Anderson, include non-competitive destinations only served by one rail line and seasonal shipments of agricultural products, when pricing escalates.

"As companies continue to prioritize clean, green and safe transport of their goods, rail’s advantages are clear,” Shanley notes. "Rail's efficiency is unparalleled, when you consider that rail can move one ton of freight 471 miles with only one gallon of diesel.”

Shipping by rail used to take longer than by truck due to the time required for train switching, but rail service has since become more efficient, abolishing the time gap, according to Anderson.

With improvements in timing and cost efficiencies, shippers are beginning to use rail for short runs, as well as for long hauls, says Walter Kemmsies, Savannah, Ga.-based managing director, economist and chief strategist of the U.S. ports, airports and global infrastructure group at real estate services firm JLL. He cites the BMSF Railway's 141-mile run between Portland, Ore. and Tacoma, Wash., as an example. "Seven-hundred and fifty miles used to be the break-even point for shipping by rail, but that's no longer true," he says.

The trend to build industrial parks alongside rail lines is especially prominent near expanding seaports like Savannah, which includes the Garden City Terminal, the fourth busiest container facility in the nation, and inland ports connected via rail to seaports, such as the South Carolina Port Authority's Port Greer and Inland Port Dillion.

The first phase of GIRP, which is located 14 miles northwest of the Georgia Port Authority's (GPA) Garden City Terminal, includes 165 acres entitled for 1.3 million sq. ft. in three buildings. The three buildings will have direct access to both CSX and Norfolk Southern via a connecting rail line already in place, notes Kemmsies, who is part of the marketing team for the project chosen by master developer Georgia Exports Co. Zoning and entitlements for the remaining 1,335 acres are underway and are expected to be secured within six to nine months.

OmniTRAX is serving as the master developer of SGIH, which is owned by Effingham County Industrial Development Authority. The company is building seven miles of rail infrastructure to connect businesses at SGIH with CSX and Norfolk rail lines and a central rail yard.

According to Shanley, "We also continue to see increased industrial growth along our 22 railroads as companies seek to further compound transportation efficiency by building industrial and logistics operations on our existing network."

OmniTRAX is developing and investing in industrial sites in Northern California, Colorado, Georgia, Texas and several other states. "These sites attract manufacturing, processing, distribution and logistics, mining, energy and import/export companies that want all the benefits from rail, including improved supply chain performance and increased safety, Shanley notes.

With off-shore manufacturers increasingly shifting from China to other places, including India and South and Central America, there is greater pressure on East Coast and Southern ports, which is causing them to expand infrastructure and capacity, says Anderson. The trend is making these ports more competitive and more attractive to industrial real estate investors.

A key point, from an investor standpoint, is that while autonomous trucks are eventually expected to solve current trucking issues, it is likely to take a decade or longer until this occurs due to safety concerns and regulatory issues, Anderson notes. "Rail has improved from a service standpoint, so shippers will utilize rail when cost and timelines are advantageous," he says.