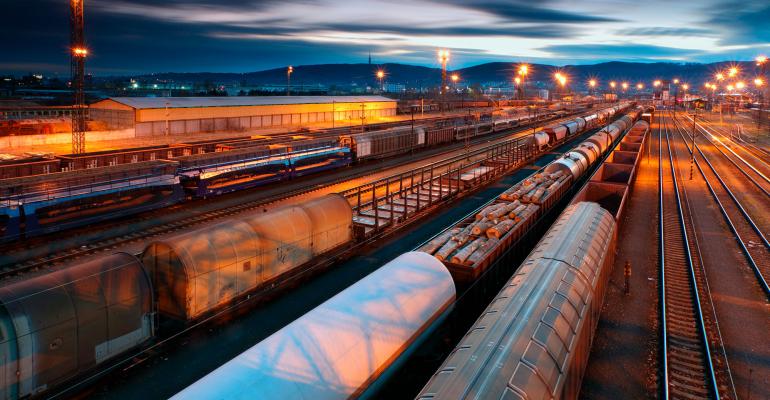 Inland port investment opportunities are growing along with growth in seaports and e-commerce operations.

Investors can be confident in tenant demand for industrial space at inland ports because they provide advantages beyond that of distribution hubs, including intermodal facilities and connection to rail transportation from seaports, he notes. They can also be a convenient pick for distribution services, including cross-docking, transloading, breakdown, assembly, sorting and storage.

New and expanding inland ports are at various stages of development throughout the U.S., some evolving as extensive logistics hubs that combine warehousing and foreign-trade zones with rail intermodal, truck, barge and sometimes air freight operations. Others are developed with a dominant purpose or transport mode. Early examples include repurposed Air Force bases that created air freight-oriented facilities near San Antonio, Columbus, Ohio and Kansas City.

Most recently, rail-oriented inland ports have been developed as extensions of marine terminals to alleviate seaside congestion and expand capacity at seaports, where expansion is limited due to costs, environmental issues, and lack of available land.

The most successful inland ports are located near major population centers, like Chicago, or at the crossroads of multiple rail carriers, such as Kansas City and Memphis, Tenn., with easy access to interstate highways for trucking access and outside city centers to take advantage of lower-priced land.  Two of the largest and busiest inland ports in the nation currently include CenterPoint Intermodal Center in Joliet, Ill., 45 miles south of Chicago, and Alliance Global Logistics Hub just north of Fort Worth, Tex., both of which have all of the above-mentioned these attributes.

New and developing inland ports, however, offer industrial developers and investors an opportunity to get in on ground floor. Tolliver cites inland ports in South Carolina and Georgia as examples.

For example, Port Greer in the Spartanburg-Greenville market serves the Port of Charleston, which is undergoing $2.6 billion in port-related infrastructure upgrades to accommodate massive ocean liners and provide access to inland ports, and the new Appalachian Regional Port (ARP) in northwest Georgia that serves the Port of Savannah, which is also undergoing major infrastructure improvements.

The expanded capacity at the Port of Savannah has allowed for the development of additional inland ports because of the ripple effects associated with being in proximity to a major multimodal transportation center.

“The Georgia EDC has done an exemplary job growing the Port of Savannah, which is allowing for the development of inland ports such as the Heart of Georgia Mega Site,” says Michael Flynn, head of Cushman & Wakefield’s rail advisory group.

Established about six years ago, Port Greer, which is located 212 miles inland and owned and operated by the South Carolina Ports Authority (SCPA), has been very successful with five top manufacturing and distribution customers that employ more than 20,000 workers, including BMW, Michelin, Adidas, John Deere and Dollar Tree.

The SGPA is also developing a new 3,400-acre inland port at Dillion just off I-95, Tolliver notes. Inland Port Dillion is part of an effort to build intermodal infrastructure that goes hand-in-hand with capital investment in the Port of Charleston, according to Jim Newsome, SCPA president/CEO. He notes that this site will diversify the state's logistics footprint throughout the South, Midwest and Northeast, as it is served by CSX, a Class I railroad that provides service into the Midwest and up and down the East Coast, from Florida to Canada.

Inland ports located in the Kansas City area are also good investment bets, as they are at the confluence of Class I rail operators and major interstates connecting markets from the East Coast to the West Coast and from Canada to ports on the U.S. Gulf Coast. The locally-grown Kansas City Southern railroad also owns and operates the Kansas City Southern de Mexico SA de CV, which provides service to Mexico's West and Gulf coasts and will be an important transportation link once NAFA 2.0 is ratified, Tolliver notes.

However, the C&W report warns investors to be careful, as not all inland ports end up being successful or can be developed quickly. The numbers must work for both shippers and rail operators in order for these concepts to take off.

“Follow the rail tracks to where the infrastructure exists,” says Flynn, noting that rail provides a more cost-effective logistics solution for moving freight across the country than truck transportation, which is impacted by fuel price fluctuations and driver shortages.