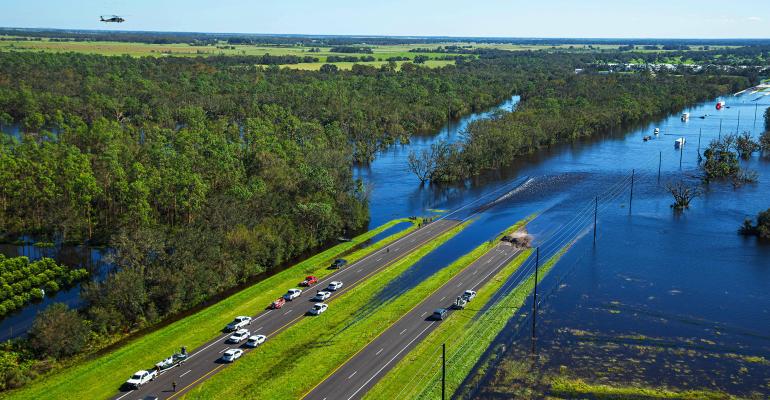 How Much Hurricane Ian Disrupted the Supply Chain

While property damage from the storm is already second only to Katrina, the impact to business operations and cargo movement may double or triple total losses. However, logistics providers are getting better at minimizing the scale of disruption.

With property damage from Hurricane Ian currently estimated at $60 billion, it will likely be second only to Hurricane Katrina as the most destructive storm in U.S. history. But that estimate doesn’t take into account the larger economic damage from the storm, including the disruption to the already strained U.S. supply chain.

Past hurricanes can provide some insight into what kind of ultimate losses Ian will bring. For example, property damage from Hurricane Harvey in 2017 was initially estimated at $23 billion, but a year later an analysis that included overall economic damage brought the total cost to roughly five times that amount, at $125 billion.

Based on experience from previous hurricane events, it will likely take at least nine weeks for businesses in the region to return to pre-hurricane operations due to the damage to buildings and infrastructure, according to a report from globalEDGE. The report notes, however, that it took more than three years for Texas cities to fully recover from the damage inflicted by Hurricane Harvey, including disruption to business operations.

Ian, as a category four storm, has left a devastating impact on Florida’s manufacturing, agriculture and distribution sectors, which include 2,800 manufacturing facilities tied to aerospace, automotive components, chemicals, plastics and heavy machinery production industries. Florida is also the location for facilities belonging to about 7,000 producers of pharmaceuticals, medical devices, diagnostic devices and other products.

Meanwhile, the hurricane’s disruption to the supply chain will reach beyond Florida and South Carolina, the two states where the storm made landfall. Bordering states are expected to experience shortages in trucking capacity, as motor carriers reroute their resources to help assist with logistics and recovery efforts in areas hit directly by the storm.

Cargo imports and exports in the South were disrupted by port shutdowns and/or reduced port operating hours, notes Matthew Dolly, national industrial research leader at real estate services firm Transwestern. This happened in Tampa, Fla, Savannah, Ga. and Charleston, S.C. In addition, bridges and highways were closed due to damage from flooding and downed trees. As a result, resulting delays in product deliveries will continue until power is restored and critical repairs and clean-up are completed, Dolly says.

“Restoration of port activity was even more critical this time around, as leading up to Hurricane Ian an increased amount of shipping was being shifted to entry points on the East and Gulf Coasts, while the West Coast continues to tangle with supply-chain issues, labor negotiations and warehouse space constraints,” Dolly adds.

The Port of Savannah, for example, has been particularly impacted by this shift, with import demand doubling that of pre-pandemic levels and causing considerable congestion offshore. Florida has also experienced increased activity at its ports. Florida’s ports were also expected to benefit from the recent reshoring trend, as the state is ideally situated for manufacturing shifts from the Eastern Hemisphere to areas like Mexico and Latin America.

On a positive note, East Coast port shutdown resulting, including the ports of Miami and Charleston, were temporary, notes Richard Thompson, national director, supply chain & logistics, with real estate services firm JLL. Due to port hurricane protocols and ocean carrier policies of helping each other deal with such events, service was restored within 24 hours.

Still, the Tampa Bay/Fort Meyers region is a major e-commerce and logistics hub. Mapping supply-chain processes at its 4,500 facilities located in the storm zone, Santa Clara-based Resilinc, a provider of comprehensive end-to-end supply-chain resiliency solutions, projects about $20 billion in lost revenue for its customers alone. This figure is based on the storm’s substantial impact on operations and the expected long recovery period for their suppliers, reports globalEDGE.

All natural disasters impact the supply chain, but unlike earthquakes, hurricanes do offer companies some lead time to prepare for the potential onslaught, which is a huge advantage in overcoming resulting supply-chain challenges, notes Thompson. If companies heed warnings, it enables them to move employees, products, trucks and other equipment out of the affected region in advance and stage needed supplies and equipment, such as water and generators, nearby.

Logistics professionals must deal with a variety of supply-chain disruptions on a regular basis, and companies are getting more sophisticated in how they predict and respond to such risks, Thompson says.

“Fortunately, Hurricane Ian was predicted in advance. No one could understand its exact path or intensity, but you knew it was coming.”