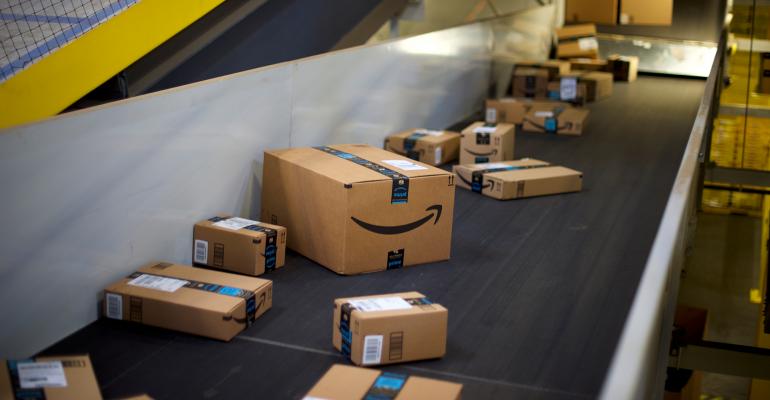 (Bloomberg)—Finding warehouse space around Toronto has never been harder, and the e-commerce fueled shortage is disrupting businesses and threatening the broader economy.

With the pandemic driving a belated embrace of online shopping in Canada, Amazon.com Inc. has been gobbling up warehouses. That’s pushed the vacancy rate in the Toronto area down to just 0.5%, making it the tightest market in North America, if not the world.

Logistics consultant Richard Kunst is seeing the fallout first hand, as companies try to fill orders and move merchandise. One client, a food manufacturer, has been forced to pack roughly a third of its orders in a parking lot. Others are so desperate for warehouse space Kunst has advised they ask local farmers if they can keep goods in their fields.

“It’s cheaper to go to a farmer and say, ‘tell me how much you’re going to make off a crop on a five acre lot, and I will pay you that, plus 10%, in order to drop containers here,’” Kunst said.

While the warehouse shortage is most acute in Toronto, other major cities in Canada aren’t far behind, with Victoria, Vancouver and Montreal rounding out North America’s top four tightest warehouse markets, according to real estate brokerage Colliers International Group Inc.

The single biggest driver of this squeeze has been Amazon.com. The pandemic has seen the e-commerce giant increase its logistics footprint by nearly 12 million square feet across nine major Canadian markets since the end of 2019, according to Colliers.

That includes taking a quarter of all the space that came up for lease in Toronto last year, while boosting its footprint 10 times in Montreal and quadrupling in Ottawa.

With new warehouse supply lagging the soaring demand, the brokerage CBRE has predicted Canada could run out of space entirely by the end of the year. That’s starting to raise alarms that Canada’s overall economy could be dragged down, just as it starts to recover from the pandemic.

“We become cost uncompetitive when we don’t have a good availability of warehousing,” said Jan De Silva, chief executive officer of the Toronto Region Board of Trade, which represents local businesses in and around Canada’s largest city. “There are fewer jobs, fewer permanent jobs that can be created, because companies aren’t able to fulfill demand.”

While the outlook for other types of commercial property, including offices and hotels, has been clouded by the coronavirus, investors have plowed money into industrial buildings over the last year, betting on the further rise of e-commerce with shoppers stuck at home.

Canada had lagged other developed economies in online shopping. But since the start of the pandemic, e-commerce nearly tripled its share of total Canadian retail sales to 10.4%, government data show.

That’s increased the need for warehouses and fulfillment centers and has pushed prices higher. Colliers estimates the cost of leasing industrial space in the Toronto area went up 25% in 2020.

Because much of what is made in Canada -- from car parts, to packaged food, to lumber products -- is for export, particularly to the U.S., the increased costs could make Canadian firms less competitive compared to international peers. And for the domestic market, those higher costs could end up being passed on to consumers, quickening inflation.

“Costs to manage the supply chain of the business are going up,” said Mike Croza, the managing partner at Supply Chain Alliance, a consulting firm that works with companies in and around Toronto. “At some point in time as costs go up, there will be some kind of transfer of increase to the consumers.”

To deal with these pressures, developers are starting to explore converting office towers and shopping malls into logistics space. Amazon’s Canadian distribution unit recently purchased a defunct flea market in a suburb of Toronto. Still, the problem may ultimately come down to land.

Canada’s warehouse crunch is, in some ways, an extension of another part of the economy currently experiencing short supply and soaring price inflation: Residential real estate.

Though the pandemic has shifted it into high gear, Canada’s housing market has been surging for years, driven by immigration and low interest rates.

With most of these immigrants landing in and around Toronto, Vancouver, and Montreal, local authorities in those cities and their suburbs have steadily converted areas zoned for industrial uses into land for housing to deal with the pressure.

Now, with home prices surging more than 30% around the country, there’s also an acute shortage of warehouse space.