/sites/all/themes/penton_subtheme_wealthmanagement/images/logos/footer.png
Recent
Recent
Why the Shift to a Longer-Term ‘Business Owner’ Mentality Is Driving Movement
May 27, 2022
NYC Luxury Theft Boss Planned Own ‘Department Store,’ City Says
May 26, 2022
Seven Must Reads for the CRE Industry Today (May 27, 2022)
May 26, 2022
What’s the State of the Capital Markets for Cannabis Real Estate?
May 26, 2022
Featured
The 10 Best and 10 Worst States in Which to Retire in 2021
Jul 15, 2021
Poll: 15 Classic Books on Investing and the Markets
Apr 03, 2020
Fifteen Must-Listen Business Podcasts for Advisors
Aug 14, 2020
Celebrity Estates: Jay Leno and Planning for Classic Car Collections
Feb 22, 2022
IMCA Annual Conference
brought to you by 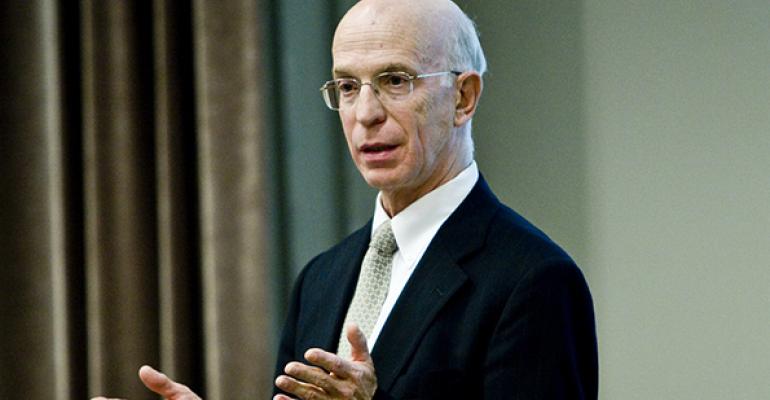 The Cacophony Problem at the Federal Reserve

Princeton professor and former vice chair of federal reserve Alan Blinder kicks off the Investment Management Consultants Association conference with a warning that the Federal Reserve’s internal arguments could “roil” markets as tapering comes to an end.

Alan Blinder, the Princeton economist and former vice chair of the Federal Reserve, said the Federal Reserve may have a “cacophony” problem that could roil markets once the board ends its bond-buying program and begins the earnest debate around when to raise interest rates.

Speaking at the Investment Management Consultants Association annual conference in Boston on Sunday, Blinder said he felt there was no way to completely adhere to a fiduciary standard, but he’d “want to see the industry move in that direction.”

Blinder gave the opening keynote presentation of the IMCA conference Sunday night and said that he was more pessimistic than he was previously about the ability of the U.S. economy to achieve sustainable growth rates of 2.5 to 3 percent for 2014, given the disappointing report released last week showing the economy basically flatlined in the first quarter of the year.

While a bad winter was responsible for much of that retreat, and it is open to revision, it makes it even more unlikely the Federal Reserve will tighten up interest rates this year – current Federal Reserve Chair Janet Yellen suggested in her first public appearance that interest rates might begin to rise six months after tapering ends. “That seems too early to me,” Blinder said.

When the Fed does raise rates, what will it do with the engorged balance sheet the government has accrued after the period of sustained bond purchases? The balance sheet stands at some $4.2 trillion, compared to $900 billion before the Lehman bankruptcy. It won’t be possible to reduce that without selling, Blinder said. Some critics are concerned that once the Fed starts that process, it will roil markets. That’s unlikely, Blinder said. The sales will be orderly and without surprises.

Blinder also pointed out the Fed’s power comes not from its statutory authority but from the fact that traders “dote” on its every word and the markets overreact.

And unlike when more domineering personalities like Alan Greenspan and Paul Volker headed the board, former chair Ben Bernanke ushered in a process more tolerant of dissent and open dialogue, greater transparency and a leadership-by-committee style. That’s for the better, Blinder said, but warned the board, split as it is between inflation hawks and doves with very different ideas about how the Fed should navigate the economy, suffers from a “cacophony problem” especially as it moves into the latter stages of tapering and considers when to lift the federal fund rate.

“In the summer and early fall, there will be only one thing on the mind of traders, and that is the Fed’s decision,” Blinder said. Unless the thinking behind that decision is crystal clear and unambiguous, markets will be prone to overreact.  “The upcoming debate between hawks and doves” on the board of governors of the Federal Reserve is “a recipe to rattle markets.”