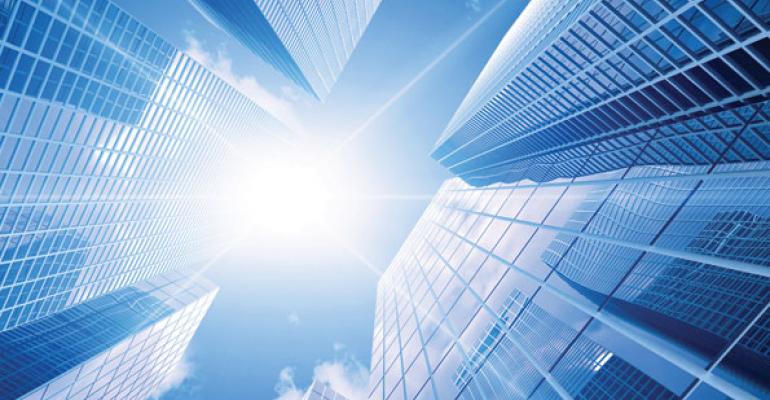 Several well-known and successful companies recently have announced plans to convert to a REIT, generating investor excitement and igniting buzz about which companies are primed for conversion. The new REITs have the potential to benefit existing investors, to attract an entirely new pool of REIT-dedicated investors, and to offer greater choice to REIT investors, according to industry experts.

“REIT conversions are a really popular topic because these very sizable and established publicly-traded companies potentially could become part of our REIT world,” says Adam Markman, managing director of Green Street Advisors’ consulting group. “We’ve seen stocks move so meaningfully after the announcements. And, there’s a hope and an expectation that the companies will benefit from the REIT ‘halo’ effect and see their multiples increase.”

It’s been a couple of years since the REIT sector has seen well-established companies convert into REITs. Prior to this year, the largest and most notable conversion was Weyerhaeuser in 2010. Weyerhaeuser (NYSE: WY)?! The paper mill and building supply company? Yup. Because of a stagnant share price, Weyerhaeuser sold off half its assets: its operating businesses, and most of its papermills. But it kept its timberlands, its house-building, wood product businesses (lumber, panels and other building products such as manufactured joists); it also kept a newsprint papermill (actually, a joint venture with another company).

Since its conversion into a timber REIT, the company has struggled, although analysts place much of the blame on the residential housing collapse. (The last six months have been good to its stock price, however.) Still, the idea was that if it turned itself into a REIT (if the IRS would allow it), it might get a pop in share price and operating performance; after all, REITs (although there are many sectors) in general have been among the best investment classes since the sector was born about 40 years ago.

In 2011, American Tower Corp. (NYSE: AMT) converted to a REIT after the IRS agreed to classify cell towers as real property. The Boston-based company, which owns nearly 22,000 cell towers, saw its stock price rise on the announcement.

American Tower’s stock price increased again after the conversion and has continued its upward trend, delighting both investors and analysts. In August 2011, for example, the company’s stock was trading at $45. In mid-January 2012, it had risen to $62, and as of mid-October, it was trading at $75.

American Tower’s experience illustrates the so-called “halo” effect that Markman referenced earlier. In general, REITs are valued at higher multiples than other publicly-traded companies, with valuations based on funds from operations (FFO) rather than earnings. The median multiple in the REIT sector is 20x FFO. 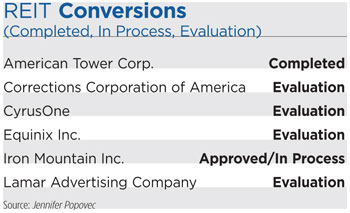 American Tower indicated that its decision to convert to a REIT was driven primarily by tax-related issues. REITs are exempted from paying federal income taxes. However, the IRS requires REITs to distribute at least 90 percent of their taxable earnings to shareholders in the form of dividends. Dividends usually take the form of cash, although in times of economic difficulty, some REITs have paid a portion of their dividends with stock.

“There’s a real push for companies to seek out single-level taxation—if they’re able to do so,” Markman says, pointing out that many companies have been compelled to evaluate REIT conversions by “activist investors.” “The math is easy to do, and it’s hard for a company to not at least contemplate the benefits.”

Consider Iron Mountain. In June, it announced that its board of directors unanimously approved a plan for the company to pursue conversion to a REIT. It expects to elect REIT status in January 2014. In its own language on its website, here is how Iron Mountain describes itself: “Iron Mountain Incorporated (NYSE: IRM) provides information management services that help organizations lower the costs, risks and inefficiencies of managing their physical and digital data. The Company’s solutions enable customers to protect and better use their information—regardless of its format, location or lifecycle stage.” The company operates more than 900 facilities in 35 countries for digital storage.

“Our Board and management team believe that electing REIT status will maximize value as we advance our operating strategy,” said Richard Reese, Iron Mountain’s chairman and CEO, in a statement. “The REIT structure provides stockholders with dividends from U.S. tax savings and other increases in distributable income that will enhance stockholder returns.” Investors will no doubt like the special dividend it must pay of $700 million, or about $4 a share, to convert.

In fact, Iron Mountain received significant pressure from activist investor Elliott Management to convert to a REIT. According to reports, in a March 2011 presentation the hedge fund claimed that the company could see its stock double or triple if it converted to a REIT.

“There’s a fascination with REITs that I’ve never seen,” says Robert Willens, a REIT tax specialist based in New York City. “Large investors are finally starting to question what activities are eligible for REIT status, and they’re pushing companies in that direction.”

In addition to Iron Mountain, data center operator Equinix Inc. (NASDAQ: EQIX) has indicated that it is seriously considering a REIT conversion to save taxes and is “watching very closely” the conversion of other technology companies, according to CEO Stephen Smith. Moreover, Cincinnati Bell Inc. announced this summer that it intends to spin off its data center subsidiary CyrusOne as a REIT.

Equinix and CyrusOne would not be the first data center-oriented REITs. In fact, there are three data center REITs that trade today: DuPont Fabros Technology, Digital Realty Trust Inc. and CoreSite Realty Corp.

Just What Is Real Property Anyway?

Iron Mountain, Equinix and CyrusOne all have indicated they plan to seek a private letter ruling from the IRS. While companies can operate as REITs without obtaining this ruling, which is basically documented permission, most of them choose to do so, especially if it involves a non-traditional asset class—something beyond an office building or warehouse, for example.

Lamar Advertising Company (NASDAQ: LAMR), for example, announced its intentions in August to seek a private letter ruling. The company, which is one of the largest outdoor advertising owners and operators in the U.S. (billboards and benches), contends that signs and sign superstructure are real property.

In simple terms, companies ask the IRS to categorize a specific asset class as real property versus personal property. They present an argument to persuade the IRS to expand its definition of real property, and the IRS rules on its decision, providing a private letter ruling that applies specifically to that company and the assets it has outlined in its argument.

Willens says the IRS recently changed the way it views these components. Previously, the agency honed in on the components’ physical aspects and whether it was easily moved or permanently attached to a structure. Today, it’s focusing on the owner’s intent.

“Does the owner intend for the component to be moved? The fact that it can be moved is not nearly as important as whether the owner intends to move it,” Willens explains. “It’s a subtle shift, but a shift nonetheless.”

The shift is illustrated by a recent court case that evaluated whether shelving in apartment buildings constituted structural components. The court ruled in favor of the IRS, which argued that the shelving was real property.

On the surface, the decision only impacts apartment owners. However, the implications are far-reaching, especially for companies such as Iron Mountain, which counts computer/server racking among its most significant assets, Willens says. In fact, he contends that the above-referenced court case was instrumental in Iron Mountain’s decision to pursue REIT status.

And, once the IRS has opened the door to a new asset class, other companies usually follow suit—although the decision isn’t made quickly nor lightly. “Companies think about converting for a very long time,” says Bob Robbins, a partner with Pillsbury Winthrop Shaw Pittman LLP who is working on a proposed REIT conversion. “It’s a very expensive and difficult undertaking.”

Getting an asset class approved as real property is just half the battle in the REIT conversion war, Robbins says. Companies must do a thorough analysis of their existing business, and that alone can be costly.

In traditional REITs, rental income and impermissible tenant service income (income that is not considered income from real property) is pretty clear-cut. But when it comes to non-traditional real property such as racking, the concept of impermissible income also is open to interpretation by the IRS, Willens says.

The IRS must evaluate what a REIT can and cannot provide as “usual and customary” services. Obviously, the more services that are included in this category, the better it is for the company because that income won’t have to be diverted into the TRS.

Admittedly, slogging through these complicated concepts may be somewhat dry and boring. But keep in mind that these decisions represent tens of millions of dollars, if not hundreds of millions—money that could either be paid to the IRS or distributed to shareholders.

And speaking of distributions, companies must purge their cash reserves when they convert. (Remember, REITs must distribute at least 90 percent of taxable income to shareholders). Case in point—when Weyerhaeuser converted to a REIT, it distributed roughly $6 billion to its investors. Can you imagine the joyful squeals from its shareholders?

“The bottom line here is that conversions can be a boon for existing investors and for investors who are looking to diversify their REIT portfolios,” Markman says.