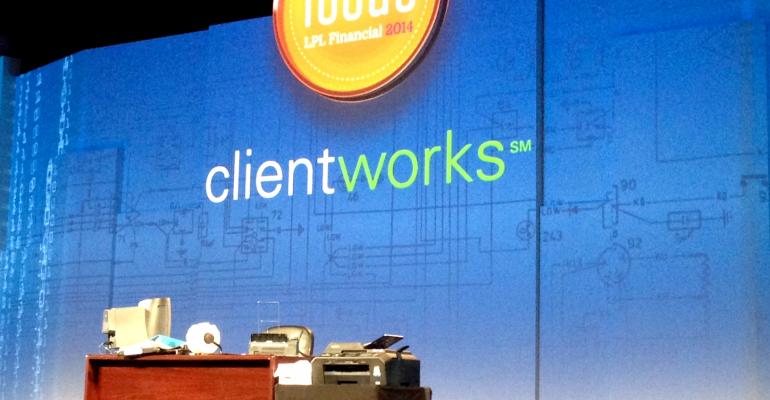 <p>LPL revealed plans for its new ClientWorks platform and other tech upgrades at its annual conference in San Diego on Monday.</p>
Advisor Channels

LPL CIO Fetter: Fax machines, Rolodexes belong in a museum, not an office

LPL Financial is making significant upgrades to its technology offerings for advisors over the coming year, including a new advisor platform called ClientWorks, the firm announced Monday.

At the firm’s annual conference in San Diego, Calif. Monday, LPL’s Chief Information Officer Victor Fetter outlined a number of initiatives the firm is working on over the next year for its affiliated advisors.

Starting this fall, LPL plans to replace its current resource center, enhance its email infrastructure to improve security and reduce risk, roll out a new annuity order entry upgrade and launch a new partnership with RedTail to offer enhanced CRM services to advisors for at little as $50 a month.

“We would love to get rid of the fax machines and Rolodexes," Fetter said. "These things belong in a museum, not in your office." And while some advisors still use the trusty Rolodex, in every survey that LPL has done, they’ve shown that CRM tools are critical to growing advisors’ businesses. That is, in part, the impetus behind the firm’s new partnership with RedTail, which advisors can start taking advantage in October 2015.

LPL also plans to launch a new advisor workstation ClientWorks in spring 2015 to eventually replace its current BranchNet platform. The big move to the new platform will allow advisors access via mobile and tablet devices at anytime from anywhere.

The ClientWorks rollout will begin with the release of a new advisor resource center this fall. The updated resource center will make it easier for advisors to search out information, as well as include refreshed content and improved overall navigation.

Other upgrades planned for fall 2014, such as enhancements to account views, structured product orders and Trade Blotter software, will also be included on ClientWorks. Fetter says daily tasks such as prospecting, account opening, trading, cash movement and performance reporting will be simplified and more integrated with the new workstation.

“ClientWorks will significantly improve productivity, allowing advisors and staff to focus more on what matters most to their clients and less on technology,” Fetter said to over 5,000 advisors at the LPL Focus conference. “Mobility is one of my passions." In that spirit, Fetter says LPL has adopted an agile approach to designing products that allows his team to be more responsive to advisors' needs.

In the interim, for those advisors currently using BranchNet, Fetter said the firm was upgrading the platform to allow access from multiple browsers including Firefox, Google’s Chrome and Safari in what Fetter called a “temporary solution.”