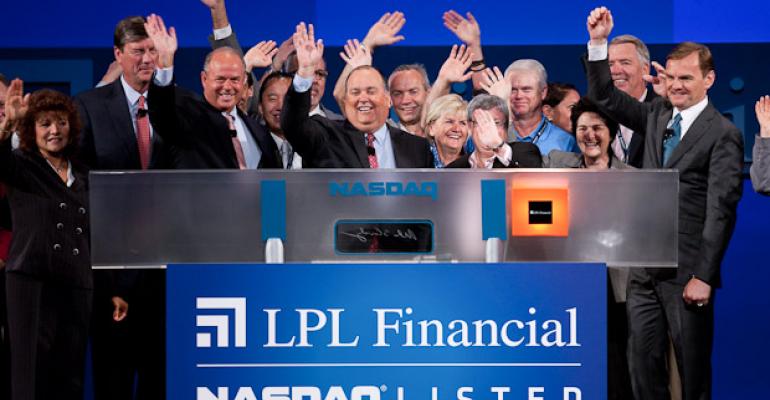 LPL Financial added advisors and assets during the second quarter, but investments in new initiatives and acquisitions dragged down earnings.

LPL Financial (NASDAQ: LPLA) said second quarter earnings were down 12.5 percent from the prior year period, primarily driven by 4.1 million in expenses related to its acquisitions of Concord Capital Partners and Fortigent, as well as its investments in its retirement platform and the formation of NestWise, a new subsidiary. The company also spent $6 million on a conference during the quarter.

During a conference call Tuesday morning, Chairman and CEO Mark Casady said the company’s portfolio is full right now because opportunities to invest rose faster than they thought they would.

“We absolutely would characterize the investments that were making as larger than we would normally like, given top-line growth,” Casady said. “We found ourselves in a situation where properties that we really had admired for a number of years in the cases of National Retirement Partners, Concord and Fortigent, became available and therefore we made the acquisitions we made, which elevated the expenses.”

Despite the decline, LPL added 223 net new advisors during the quarter, compared to 115 net new advisors in the first quarter, bringing total advisor count to 13,185. In the last year, LPL has added 671 net new advisors. Advisory and brokerage assets were up 3.6 percent from the second quarter 2011 to $353 billion, and included $2.8 billion in net new advisory assets. Advisor revenue was a record $268 million, up 6.9 percent sequentially, driven by net new flows and strong market performance in the prior quarter.

But advisor productivity slipped 7 percent from the year-ago quarter, with annual commissions per advisor at $136,000. That’s 5 percent lower than the first quarter of this year.  Robert Moore, president and chief operating officer, said average production was brought down by strong FA headcount, as well as reduced transaction activity and flat markets. The lower production numbers were primarily driven by investor sentiment, which is cautious to negative, Moore said.

“Our advisors have been clear in communicating to us the more cautious sentiment that exists among retail investors, causing lower investment activity, which intensified in June,” Casady said. “When faced with these macro-driven headwinds, it is challenging to produce top-line growth in the short term.”

But the company believes its investments and recent acquisitions will pay off long term. In April, LPL launched its new subsidiary—NestWise—aimed at providing advice to mass and middle market clients. In July, the company announced it would acquire Veritat, a registered investment advisory firm that uses a proprietary online financial planning platform designed to support advisors who serve the mass market.

“It’s a massively underserved market,” said Casady, during the call. “There really is not a set of advisors or institutions fully dedicated to that space, and it’s an area that really needs help.”

In addition to exploiting a largely untapped market, the firm sees it as a training ground for younger advisors and career changers. They expect NestWise advisors to handle two to three times the number of accounts than the typical independent practice. So far, LPL has eight advisors registered with NestWise, with another 11 in the pipeline.

But NestWise is a start-up business, and it will take a couple years before LPL sees any profit from it. NestWise added $2 million in ongoing costs for the firm, and Casady expects they’ll break even on it by 2014.

“These are moments to breathe deeply and forge ahead,” Casady said.