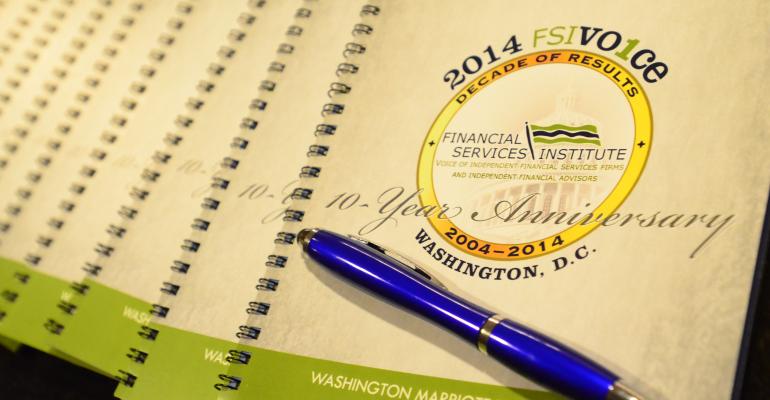 FSI to Focus on DOL, Tax Status of Indie Brokers in 2014

The Financial Services Institute on Tuesday outlined its objectives for 2014 and will focus on the DOL’s planned fiduciary proposal and trying to get some protection for advisors over their tax status as independent contractors.

CEO Dale Brown says there is a lot that needs to be addressed, “but right now, given current politics, current regulatory environment, we have to work for incremental change.”

Executive vice president and general counsel David Bellaire hopes the fact that it is an election year will give the group some leverage. “Members of Congress are going to be particularly open to meeting with members.”

The Department of Labor’s proposal to mandate some kind of fiduciary definition under ERISA—a proposed rule is expected out later this year—provided FSI with an opportunity to build "good working relationships" with Congressional groups that the FSI previously didn't have, such as with progressive Democrats. “What we learned is they represent constituents that have the same main street concerns,” Brown says.

The FSI will argue the proposal will limit access to financial advice, especially among smaller investors. The best outcome would be that the DOL makes no rule at all, the leaders said. Alternatively, the proposal would be so narrowly drawn in a way that protects investors but doesn’t "impact their access to advice." Bellaire says he’d be very surprised if the DOL carved out IRAs from the fiduciary definition’s scope.

Another big initiative in 2014 is bringing a permanent fix to the ever-shifting view of independent brokers as independent contractors in the eyes of the IRS. Under the current rules, the IRS uses 20 factors to determine whether an individual is an employee or an independent contractor, and taxes them accordingly. A key component in the SEC's eyes is the level of control that is exerted over a person’s business. When it comes to independent advisors, FSI argues, supervising brokers to deal with FINRA and SEC regulations can start to look like employee oversight, at least to the IRS.

“It’s hung over our industry for far too long,” Bellaire says. “Our members have really lived under uncertainty for a number of years.”

The independent business model has a long and sustained history of meeting the independent contractor rules, Brown says, but there’s a lingering feeling out there IRS can come in and change things. “We think it’s a question that the IRS should not have the opportunity to raise.”

The group is also making big strides in working with state regulators on attempts to tax financial advice. “Our members don’t need to become adjunct tax collectors for the state,” Brown says.

“Our members are deeply frustrated on a variety of fronts,” Brown says. They feel that compliance is a burden, the cost and complexity is real and has consequences in their business. While advisors would like to see this solved tomorrow, the reality is it will take time, Brown explained.