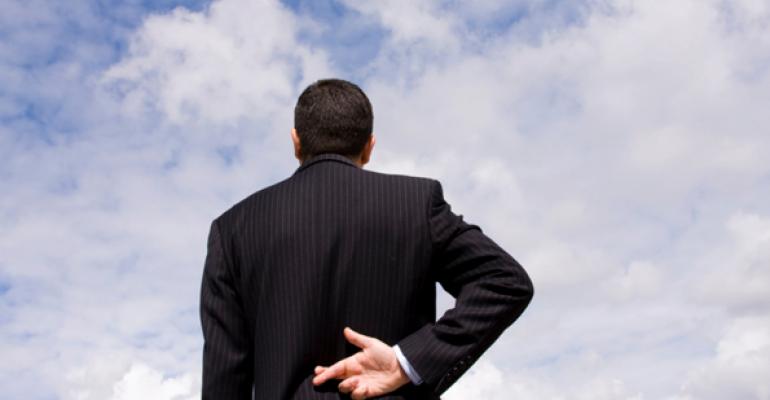 In our third annual Independent Broker/Dealer Report Card Survey, reps turned out to sing the praises of their firms. But who are they kidding? The IBD business is in a tight spot.

When you’re a parent, you always want to shield your child from the brutal realities of the world. You want them to maintain that wide-eyed innocence for as long as possible.

But sooner or later, they realize: It’s a dog-eat-dog world out there.

Same goes for the independent broker/dealer business. In REP.’s third annual Independent Broker/Dealer Report Card Survey, fielded at the end of last year, 2,873 advisors turned out to advocate and endorse their firms, giving them high overall scores in categories from compliance to compensation and benefits.

But the results seem to belie the pressures that these home offices are under. The economics of the IBD business haven’t changed; independent b/ds are up against it. They’re faced with rising regulatory costs and a greater demand for technology investment to stay competitive. Yet many of their traditional revenue sources have dried up, with low interest rates and the continued caution of retail investors. 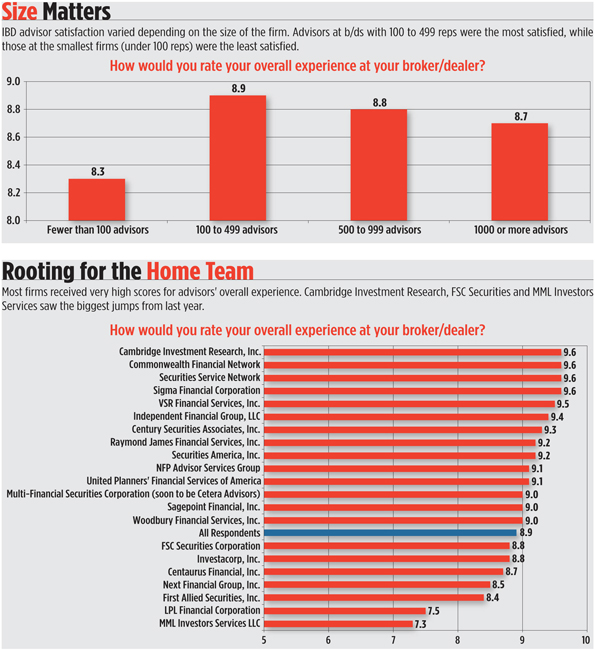 “‘I have to throw more lawyers and legal aides and compliance people at watching [advisors],’” says Brad Hintz, analyst with Bernstein Research, describing what many IBDs are thinking. “‘And my expenses are going up, same time my revenues aren’t, and I’m trying to compete with people who are offering somewhat better platforms than I and certainly a better list of products than I’m able to.’”

As a result, attrition rates are high, with 269 b/ds closing up shop in 2012, according The Compliance Department, a Centennial, Colo.-based firm that provides compliance outsourcing services to b/ds and investment advisors. And fewer people are starting up new broker/dealers; only 127 new b/ds were launched last year, down from 173 in 2011.

This is not to imply that the business is dying out. Those firms that can achieve economies of scale and spread out the costs of doing business among a greater number of advisors can survive and be profitable.

The IBD business model is predicated on the idea that as you build up the business, brokers are going to build assets and from those assets will come cash, Hintz says. The b/d then makes money from the cash management products the firm offers, and it should result in margin expansion over time. 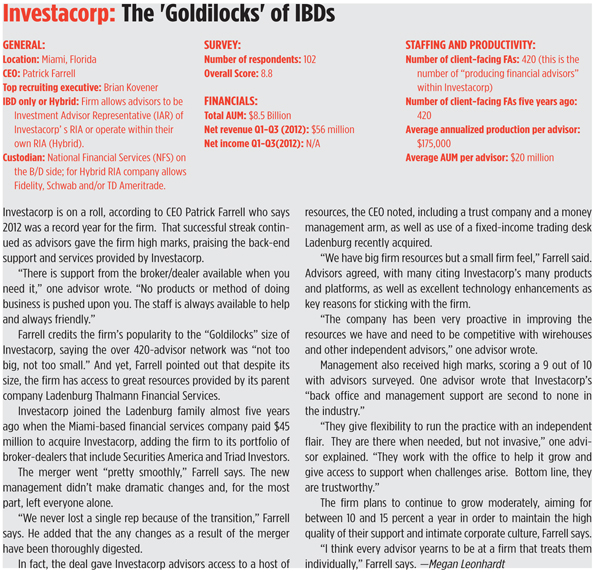 So what happened? For one, Hintz blames the shift from mutual funds to exchange traded funds and index products, free riders on the distribution of every retail brokerage operation. Because they’re no-load, passive vehicles, b/ds don’t collect the same fees for distributing index products as they do from selling mutual funds.

And it’s taking longer for the retail investor to get back into the stock market, another hit to the revenue of IBDs, says Hintz.

“If you’re worried about your job, you’re going to prefer liquidity to anything else.”

In other words, the biggest market risk for retail investors is unemployment, and that risk doesn’t drop until they’re confident that they’re going to remain employed. Hintz doesn’t expect that to happen until 2014, at least.

At the same time, interest rates are near zero, so whatever revenues b/ds were earning from money market funds and cash accounts are gone. Money market revenue is typically not shared with the rep; it falls to the firm’s bottom line, says Jon Stern, managing director at New York-based private investment bank Berkshire Capital, who specializes in investment management and broker/dealers.

And it’s not a small chunk of change. Money market revenues used to make up about half of a firm’s revenue, says Jonathan Henschen, president of the recruiting firm Henschen & Associates. Now, it’s next to nothing of their revenue. 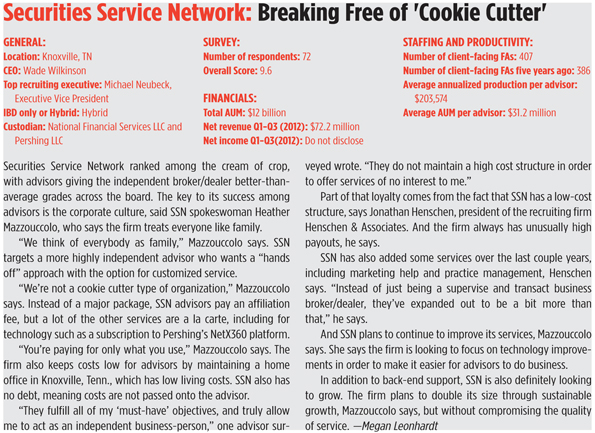 “When you have multiple years where revenues are not jumping back up, a lot of change is happening, and you react to it with low revenues, you’re totally under stress,” says Alois Pirker, Aite Group research director.

Burning a Hole in the IBD Pocket

While sources of revenue are drying up, these firms also have to deal with increased costs associated with compliance and technology. In the last couple years, FINRA has tightened up its supervision requirements, raising broker/dealer back-office compliance expenses by about 25 to 30 percent, Henschen says. For example, FINRA has increased its net capital requirements, or the minimum amount of capital b/ds are required to set aside.

“Capital that [firms] can use to help their reps with things, they’re having to devote it to additional compliance department costs,” Henschen says.

On top of that, last year FINRA raised its new member application fee to $7,500 for small firms with up to 10 registered reps, and to $55,000 for large firms with over 5,000 reps. The processing fee for new member applications went up from $350 to $500. And then there’s that additional $5,000 surcharge for new member firms that want to conduct clearing and carrying activities. Sounds like small potatoes, but it adds up.

Other fees have also been increased in the last year, including the branch office annual registration fee, central registration depository fees, advertising, and corporate financing fees. FINRA now assesses a new fee on continuing membership applications, including any time a firm wants to add a new line of business or change ownership.

“It’s the smaller guys that are getting hit with the overregulation, all the price increases that have taken effect from the regulators,” says David Alsup, director of business development at The Compliance Department. “It’s stifling a small firm from being able to widen their band of product offerings.”

In addition to compliance costs, there’s also the rising cost of technology. Because of the competitive recruiting environment, advisors can demand more from their firms, including a more robust technology platform, says Jodie Papike, executive vice president at Cross-Search. 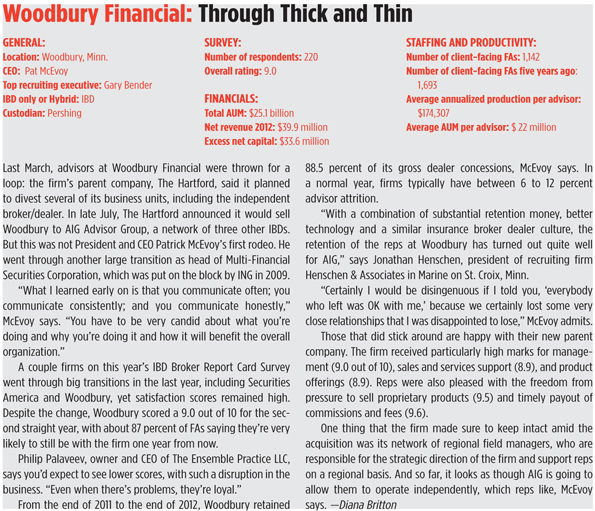 “There is a lot of demand for quality advisors and not enough supply, and that always creates an environment where advisors can expect more,” she says.

In fact, 41 percent of advisors said technology was the most important factor that would cause them to look for a new b/d.

In this business, the large firms get larger, and the small firms go out of business or get bought. According to IEP’s Gregg, the attrition rate of small firms—typically those with under 150 reps—is currently 12-14 percent per year. Meanwhile, the top five IBDs by assets are consolidating asset market share, which rose to 50.6 percent in 2011 from 41.6 percent in 2008, according to Cerulli Associates. 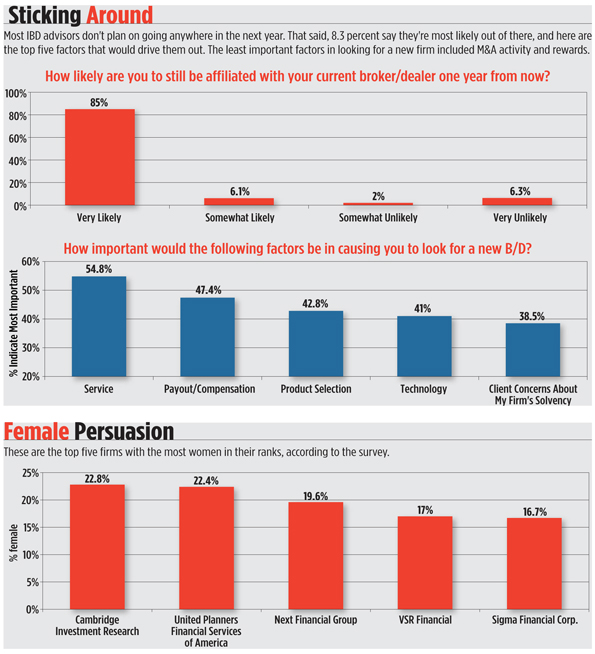 But if you can achieve scale, the IBD business can be profitable, analysts say. The idea is, the larger a firm gets, the higher the fees for distributing products from a third party provider, says Bernstein’s Hintz.

If the IBD business is still in rough waters, why are most advisors singing their praises?

Philip Palaveev, owner and CEO of The Ensemble Practice LLC, believes the survey is a combination of objective feedback and some window dressing by advisors who filled out the survey. Some broker/dealers push out these types of surveys to their best clients, asking them to give them a good review, he says. 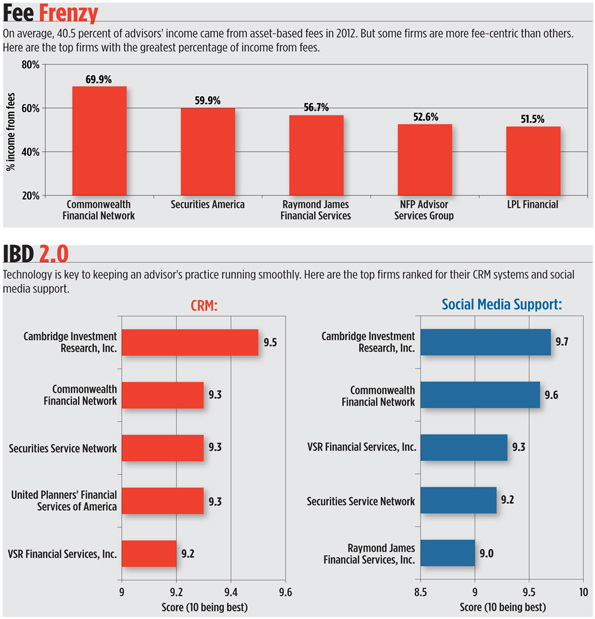 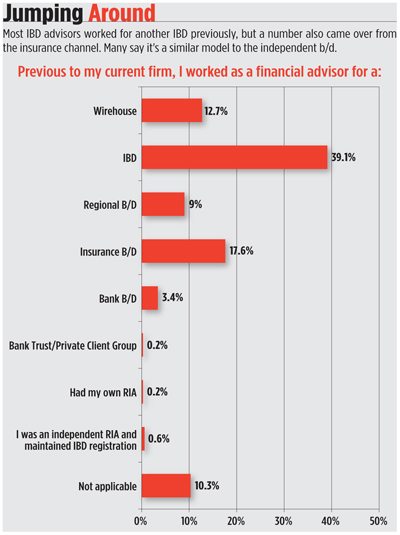 “It’s very clear that reps are trying to promote their firm and not necessarily giving a very objective measure of how well IBD doing everything,” Palaveev says. “They distribute it to their reps and they say, ‘You’ve got to give us a 10. If you have a problem come talk to us, but don’t give us anything less than a 10.’”

For example, many of the firms on the survey don’t even offer medical benefits, yet they are scoring a 5.0 or higher (out of 10) in this category, Palaveev notes.

Then again, if the adage ‘bigger is better’ holds true, advisors may simply be more satisfied because there are more larger firms in the survey. Most respondents were from large and mid-sized broker/dealers, which received high overall scores of 9.0 or more. Meanwhile, reps at smaller firms (those with fewer than 100 advisors) were the least satisfied group, giving their firms an 8.3 out of 10. (Still not a bad grade.)

Reps may simply be more concerned with running their own practices; the profitability of the home office may not even cross their mind, says Berkshire Capital’s Stern.