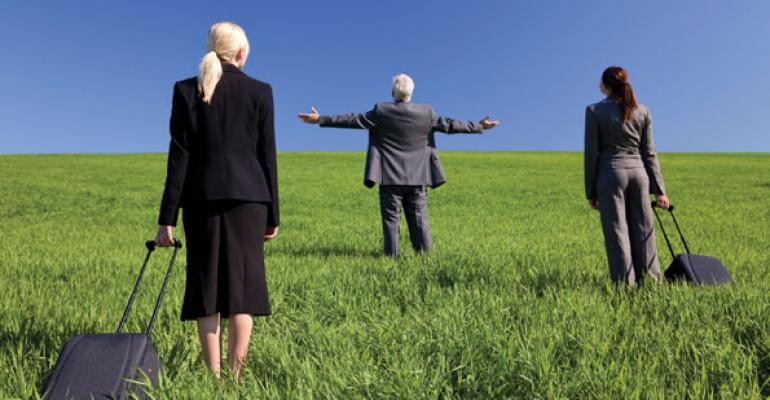 Are Independents Here to Stay?

Recruiting into the independent broker/dealer channel has not materialized as people thought this year, but new research from Cogent says that may soon change.

While recruiters say the number of breakaway brokers going independent has slowed down this year, defying expectations, the pace may pick up soon. Twenty two percent of advisors are considering a move in the next two years, according to a recent report by Cogent Research. Their top choices of where to land? LPL Financial (43 percent are likely to consider it) and Raymond James Financial Services (40 percent).

“They (Raymond James) are the ones that really established the independent model as a viable alternative to wirehouse reps,” said Jonathan Henschen, president of the recruiting firm Henschen & Associates in Marine on St. Croix, Minn. “Wirehouse reps can go over there and they have the same look, feel, culture of a wirehouse, yet they’re independent 1099.”

Aite Group predicted that 2012 would be a landmark year in breakaway volume as the golden handcuffs loosen at the wirehouses. But recruiters say that movement has not materialized. According to data by Meridian-IQ, 2,431 wirehouse advisors moved in the first half of 2011, versus 1,919 who moved during the first half of 2012.

“Those stay bonuses are ending at the wirehouses, but we’re not seeing them jumping ship either, at least not to the independent channel,” Henschen said.

Instead, they’re jumping from wirehouse to another wirehouse, to regional firms, or to large RIAs like HighTower, Henschen said.

“If they do go independent, it’s usually to one of four firms; either they go to LPL, Raymond James, Finet—Wells Fargo, or Commonwealth, because those are the names that are common out there, and the wirehouse reps tend to gravitate to name-branding.”

The likelihood that advisors will move has hovered around 22 percent in the last couple years, according to Cogent’s report. Meredith Lloyd Rice, senior project director and co-author of the Cogent report, said she did expect that to go up this year, with the wirehouse retention packages winding down and with the low rates of satisfaction in the wirehouse channel. Advisor satisfaction was lowest in the bank and wirehouse channels, at 49 percent and 54 percent, respectively.

That said, in Cogent’s study, advisors in the wirehouse channel had the highest likelihood to say that they’re going to jump, at 29 percent. Based on advisors’ intentions to change firms, the wirehouse channel is expected to contract from 30 percent of headcount marketshare to 26 percent by 2014, Cogent said.

“I do think with the retention bonuses expiring, there is the potential for a lot of movement coming up in the next year or so,” Rice said.

“They haven’t moved yet; this is what they might be thinking of doing in two years,” Rice said. “I think part of the reason they’re considering going to the RIA channel, when we looked at the reasons why, was because they wanted more independence. So I think for independent firms, there’s a chance to reach out to those advisors that haven’t made a decision yet.

“In the national wirehouse channel, a lot of it is just that they’re dissatisfied with their current employer. They might want greater independence in addition to greater job satisfaction as well as the opportunity to earn more money.” 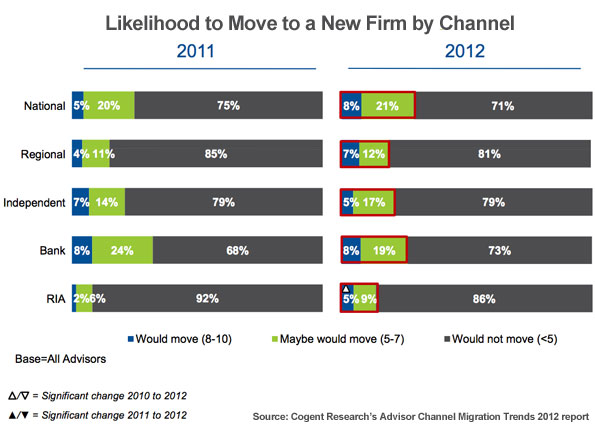