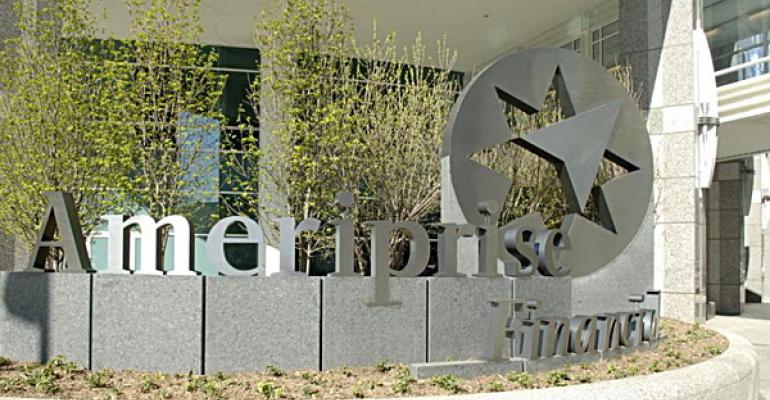 Advisor count continued to rise at Ameriprise Financial in the second quarter although productivity notched lower due to market volatility that hurt trading, the firm said today.

Ameriprise reported 9,803 employee and franchisee advisors in its Advice & Wealth Management segment at the end of the last quarter, up 59 from the previous quarter. It was at least the fifth consecutive quarterly increase. Client assets in the segment reached $330.8 billion, up 3.7 percent year over year.

The results were hurt by the discovery that Ameriprise had received incomplete data from a third-party service provider for securities lending activities, resulting in miscalculating the company’s tax position and reported earnings, it said. It estimated the financial impact at $40 million, or 18 cents a share. The data issue was resolved, it said.

Yet Ameriprise stock rose nearly 6 percent today, to close at $50.76 a share, on news that the company planned to buy back more stock as a result of a change to the structure of its federal savings bank subsidiary, Ameriprise Bank, that would reduce capital reserve requirements.

Ameriprise said it has successfully completed the second phase of the brokerage platform conversion for franchise advisors, and it expects to finish the project in coming months.